The Reasons New York City Streets Are Constantly Under Construction

A worker guides traffic at a road construction site near Wall Street in New York City. (Robert Nickelsberg/Getty Images)
By Will Levith 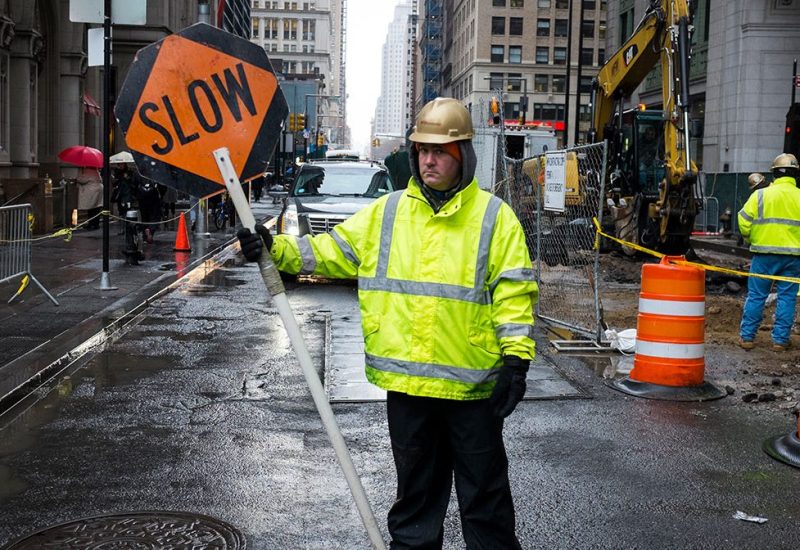 Whether you’re a Big Apple native or transplant, you become accustomed to seeing construction everywhere. Be it on the bridges and tunnels you drive on the way to work, subway lines you take between boroughs, or literally the street in front of your apartment, construction is all around. But did you ever stop to think of why it’s that way?

As The New York Times‘ Emily S. Rueb recently reported, there are several factors leading to the city’s often general disrepair, including the all-day rush-hour traffic and the East Coast’s penchant for inclement weather (see: Hurricane Sandy). But maybe the most interesting (and least obvious) is that of the subterranean infrastructure—parts of which are more than 100 years old—and how they’re regulated. Here’s Rueb:

“[U]nlike local governments elsewhere, the city doesn’t control what goes on in the subterranean tunnels and tubes. Every day, dozens of private companies cut into the asphalt to maintain their telecommunications, electricity, gas, or steam networks….Coordinating those repairs, while providing pedestrians, drives, and cyclists with sound streets, is a colossal endeavor.”

Why is this way? Apparently, it all started with the Great Blizzard of 1888, which dropped 20-60 inches of snow on the Northeast, and left the city crippled. To secure the city against future natural disasters, officials were compelled to have all the utilities buried instead of aboveground. Hence the mess we live with today.

And if that weren’t problem enough, Rueb notes there is not an “official map of the underground”, so that people may be unaware of what they’ll discover until they actually dig, creating a technique workers call “peek and shriek.”

To read more about what lies beneath the Big Apple, click here.