National Geographic Investigates the Healing Potential of Faith and Spirituality

At the University of Florida, Parkinson’s disease patient Russell Price undergoes surgery to implant a microelectrode that will deliver deep brain stimulation (DBS)  to motion-controlling parts of his brain. Doctors don’t know how much of a positive result would be due to the treatment and how much to the placebo effect. “The line between treatment and placebo is blurrier than ever,” says neurologist Michael Okun. (Erika Larsen/National Geographic)
By Matthew Reitman 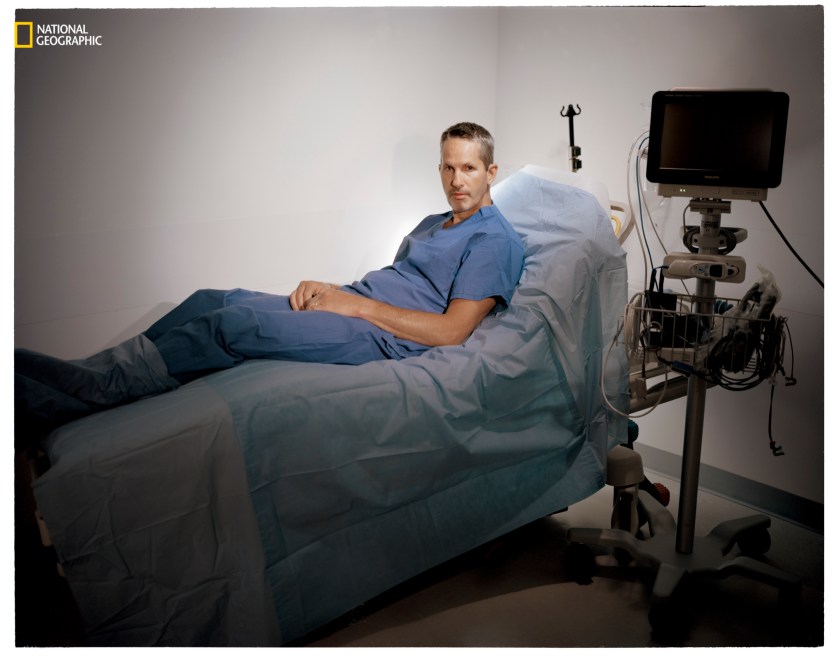 Mike Pauletich, during a trial at Stanford University, believed he had surgery to alleviate Parkinson’s symptoms. In fact he’d received a sham surgery—but he did feel significant relief. ‘Whether it was placebo or some effect of a drug,’ he says, ‘it doesn’t matter to me.’ (Erika Larsen/National Geographic)

Many believe that science and religion are at odds, but some scientists have come to the conclusion that the two may complement each other in specific situations. Mike Pauletich (above) might agree with the latter after undergoing an experimental surgery, as part of a study, to slow down his early onset Parkinson’s disease. Pauletich’s quality of life improved drastically, and he has almost no visible symptoms today—which is remarkable, given that he never received the experimental procedure, just a placebo.

In National Geographic‘s December issue, the magazine investigates the healing potential of religion—and more generally, spirituality. As breakthroughs continue to push the boundaries of medicine forward, scientists are starting to explore how mere belief can alter the way we heal. From your average Sunday churchgoers to individuals that have their own personal belief systems, researchers are looking at placebos, rituals, and mystical experiences to see if they have any ameliorating effects. 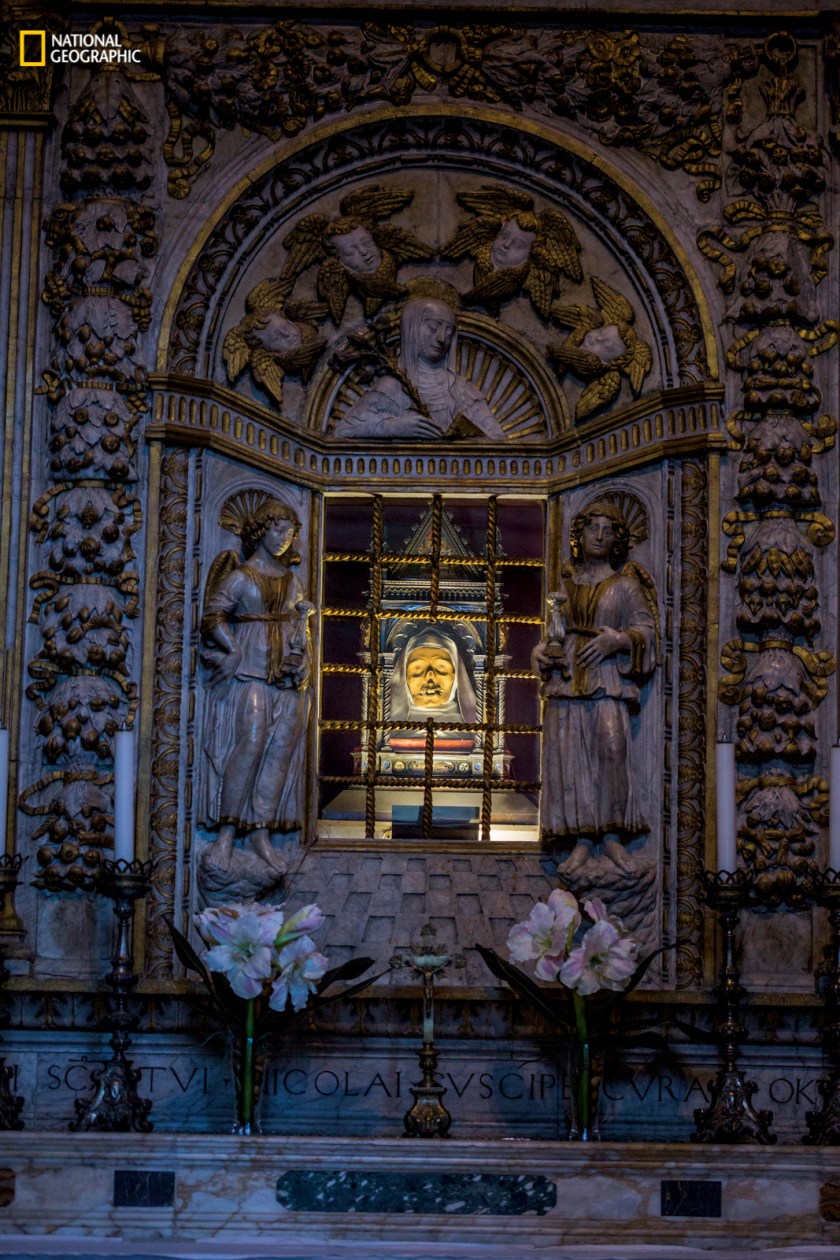 In Siena, Italy, at the Basilica Cateriniana San Domenico, the shrine of St. Catherine, which includes her mummified head, beckons to Roman Catholic pilgrims seeking cures. ‘If you have doubt,’ says local guide Chiara Biccellari, ‘you will receive nothing.’ (Erika Larsen/National Geographic)
Erika Larsen

Science and religion have actually been closely connected since the days of shamanism and spiritual healers. Evidence of religious healing being used in prehistoric cultures dates back some two million years, and in many cases, these healers were among the most revered in their society. Yet we haven’t been able to evaluate its effect on human life; modern standards for experiments were not around when the confluence of religion and health was at its zenith. There was much skepticism, too.

Since then, scientific experiments have become the standard of proving a hypothesis true or false. Although many religions around the world still incorporate aspects of religious healing into their practice, they are a far cry from the ancestral practices they once were. For example, the Mexican witch doctors, or brujos, from the Veracruz state, adapted some shamanistic traditions from Roman Catholicism. 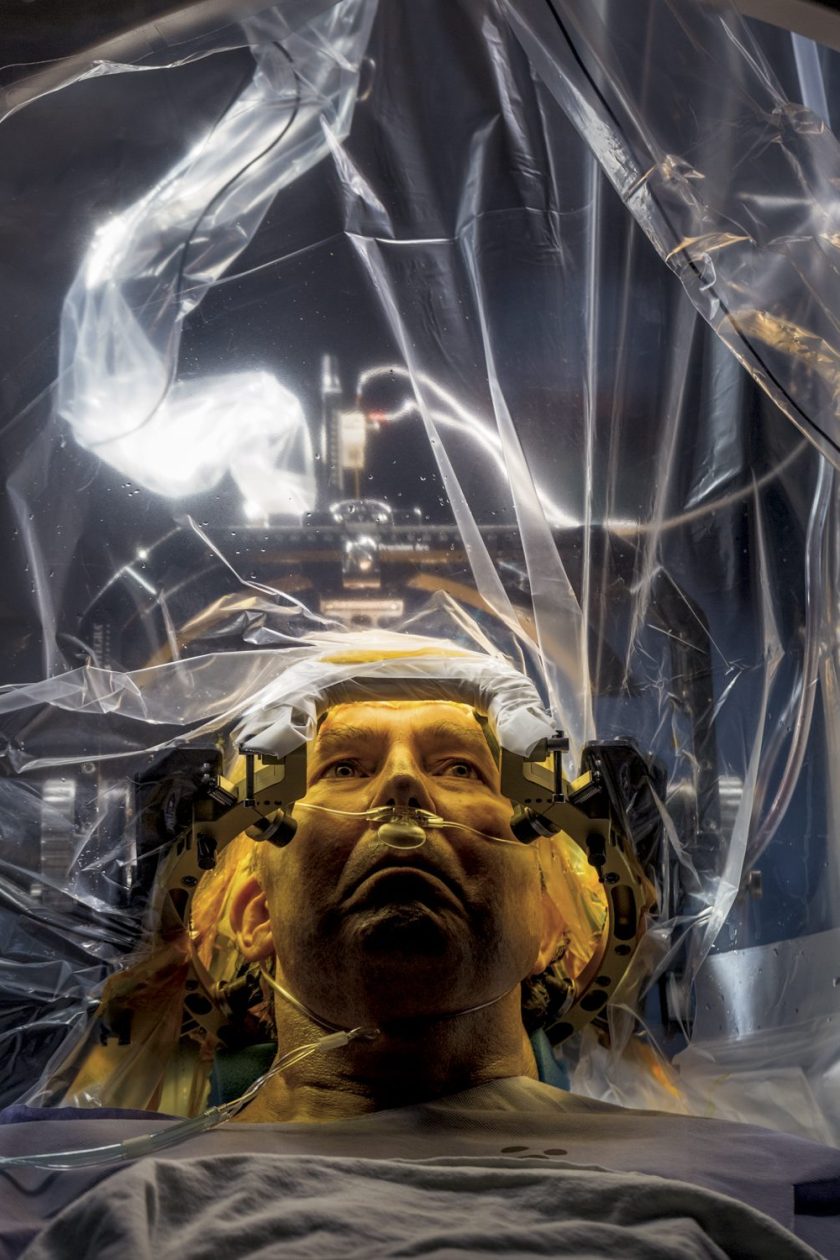 At the University of Florida, Parkinson’s disease patient Russell Price undergoes surgery to implant a microelectrode that will deliver deep brain stimulation (DBS)  to motion-controlling parts of his brain. Doctors don’t know how much of a positive result would be due to the treatment and how much to the placebo effect. ‘The line between treatment and placebo is blurrier than ever,’ says neurologist Michael Okun. (Erika Larsen/National Geographic)

National Geographic sent writer Erik Vance on a journey—exploring hospitals, laboratories, and places of worship—to see if he could find the healing powers of belief. In the process, the journalist uncovered the fascinating power of placebos, as well as the surprising amount of afflictions improved by spiritual practices. For the latter, Vance joined a group of pilgrims among the millions who visited the Black Madonna in Altötting, Germany, annually. Here’s Vance:

“When we arrived in the Chapel of Grace, we found it covered inside and out with ex-votos—pictures representing miracles spanning hundreds of years and showing every imaginable ailment. Propped against the walls were crutches and canes left behind through the ages by parishioners and pilgrims whose suffering was relieved by the Black Madonna. The expectation of healing continues unabated.”

Additionally, Vance talked to pain specialists, neurosurgeons, Peruvian healers, biomedical researchers, and other pundits in the realm of religion and medicine for the story.

Read Vance’s full story and see more of the photographs like the ones above in the December issue of National Geographic, here. Also, watch Vance talk about his investigation in the video below.