The answer to "Should I go home with my co-worker?"

The first rule of the holidays? Survive them. Especially the occasionally awkward office soirée part of them. Here’s your cheat sheet for achieving that.

• Seven items that will make your the most popular guy at your party
• How to start (and end) conversations with strangers
• The answer to “Should I go home with my co-worker?”

Plus: simple but amazing bar tricks, an idiot-proof potluck recipe and even a not-that-ugly guide to sweater parties.

On a good night, all you need to steal the show is a couple good jokes and a cursory knowledge of party games. But some nights call for a higher-proof approach. So here’s a primer that’ll boost your favor among even the most humbuggish of company. Pick up these things, don thy most festive sweater and get out there, big guy.

“Do I want a watch that’s heritage or hi-tech?” Call it the contemporary watch-buyer’s dilemma. Best of both worlds: the new Oris Divers Sixty-Five. Retro good looks? Check. Swiss-made, fully mechanical movement? Check. Modern materials? Check. The perfect watch for showing up fashionably late, the perfect watch for knowing when to bid adieu.
BUY IT HERE

Our office has a holiday potluck every year. Lot of hitters in the mix at InsideHook HQ – got an Italian from south Brooklyn does truffled gnocchi. A Latin American chap bringing a strong empanada game. A sangria so good it’s been known to cause … problems.

Thus every year I feel the stress of trying to keep up with the culinary Joneses around here. Because I am not a very good cook. And I am also pretty lazy.

So I set out to craft a recipe that walks that razor fine line between “I could do this half drunk in the dark” simplicity and  “What black magic did you put in this?” deliciousness. I believe I have succeeded in that endeavor. The recipe is for Brussels sprouts. And it’s so easy to execute a well-trained chimp could get through it. 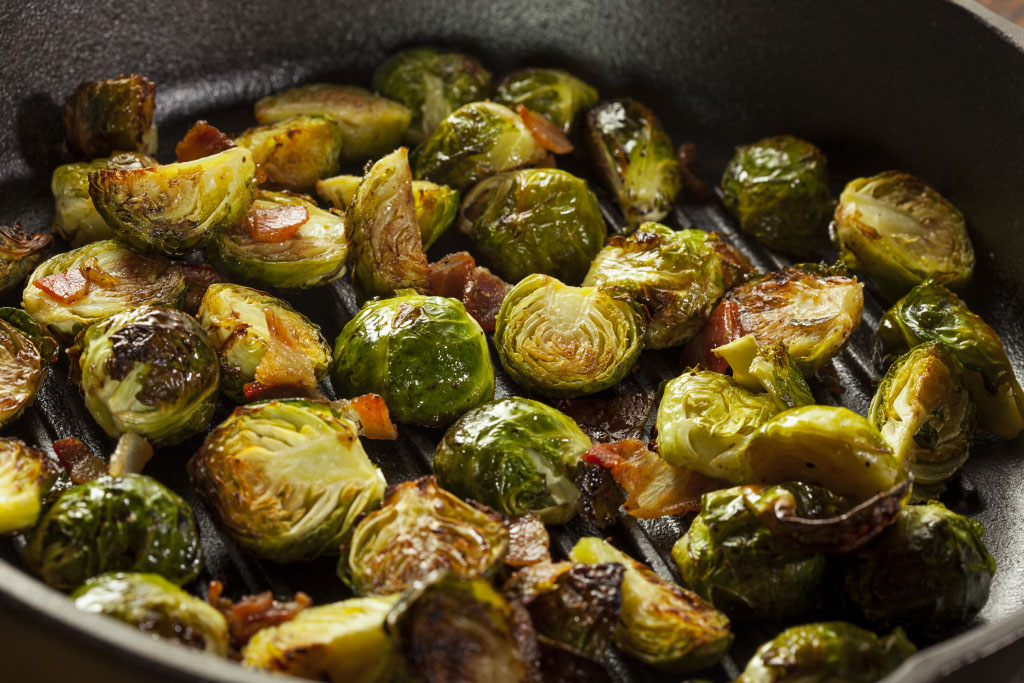 A bunch of Brussels sprouts (I don’t know how many people you’re feeding, man; ballpark it)
Several slices of thick cut bacon (go to a good butcher where they slice to-order if you can)
Olive oil
Minced garlic
Salt and pepper
Salt n’ Pepa (not 100% necessary, but just good tunes to cook to)

1. Halve all the sprouts. Guess you could wash them too, but I feel like cooking heat kills germs. Live a little.
2. Put them into a bowl and pour a generous amount of olive oil over them.
3. Throw in a couple spoonfuls of the garlic.
4. Salt and pepper on everything. Be liberal with it. I’ve also experimented with adding other spices like Allspice or Old Bay. Basically you can get creative and it’s tough to screw it up.
5. Mix everything up with your hands. It’s good if the sprouts kinda come apart — the smaller bits get crispy and awesome.
6. Dump it all out on a cookie sheet and spread it out into one layer.
7. Cut the bacon strips into small pieces (food dorks call these “lardons,” so feel free to save that term and use it later to seem fancy).
8. Sprinkle them all over the sprout mix on the cookie sheet.
9. Put the whole thing in the oven at 350 for about 40 minutes or until they’re looking crispy and your whole place smells awesome but has not yet caught on fire.
10. Take them to the potluck.
11. Collect praises.

Find Common Ground
Good conversations are built on mutual interests. So beat around the topical bush until you happen upon something that your new acquaintance is enthusiastic about. A good place to start: Ask who or what brought them to the party. Chances are the two of you have a friend in in common (like the host). Talk about that person. Tell a story about him or her. Self-deprecating ones work especially well.

Avoid Politics
Unless it’s clear you agree about them.

Ask Questions
Here’s a not-so-secret thing we believe to be true of humans: they like talking about themselves. Most people will boast — wittingly or not — when given the opportunity. So if your new friend starts babbling on about the deal he’s about to close or the incredible sand save he made on the 17th last week, ask him about those things. Don’t know what the hell he’s talking about? Even better. You’ll learn something.

Know One Good Joke
Here’s one: A Buddhist walks up to a hot dog stand and says, “Make me one with everything.” Here’s another: The Buddhist asks for his change. The hot dog vendor says, “Change comes from within.”

Listen
“God gave you two ears and one mouth for a reason,” they say. Being a good listener — well, playing the part of a good listener, at least — is easier than you think. We like to keep TED Talk alum Julian Treasure’s RASA Method top of mind: Receive, Appreciate, Summarize, Ask. Not only will vocal reinforcement remind your company that you’re engaged, it’ll also force you to stay engaged.

Depart With Grace
Are you ready to be done with this conversation? That’s fine. Just don’t be rude about it. Step 1: Wait for a lull (an exaggerated “So,” “Well,” “Anyway,” etc.). Step 2: Know your next objective (whether real or fabricated) and announce it: “It’s been great talking with you, Tim, but I’ve gotta ask Vicky about our kids’ carpool before she takes off.” Smile, shake hands and head off with purpose.

Best way to jumpstart a party? Drinking, for starters. And bar tricks. Not “magic,” per se, but simple sleight of hand (or mouth) exercises that’ll keep the attention on you and the conversation flowing. Along with the booze.

Our rules here: No excessive prep work. Use only readily available props (glasses, straws, matches, etc.). And nothing you couldn’t memorize and put to use in 30 seconds. Enjoy!

The setup: Bet your friend you can down three pints of beer before they can down three shots. Neither of you is allowed to touch the other person’s glasses. And you get a half beer head start.
The trick: Finish your head-start pint quickly and then place the empty glass over one of their remaining shot glasses.

The setup: Only use this in a bar — not anywhere you’d be drinking for free. Place a napkin over the top of your friend’s glass. Bet them a dollar you can drink their drink without moving or touching their glass or the napkin.
The trick: Remove the napkin and down the drink. Hand your mark the dollar. Congrats, you just got a $1 drink.

The setup: Set an olive and a snifter side-by-side on the bar. Declare “I can put this olive into this snifter without touching it.” Take bets.
The trick: Turn the snifter upside down, place it over the olive and move it in a circular motion. The olive will swirl up into the snifter, allowing you to deftly flip it over and collect your money.

Break five matches in half (but still attached). Place into a ten-point star. Without touching the matches, turn into a five-point star.
The trick: Place a teeny drop of water in center of star with a straw. Wait a moment. The matches should group together into five disparate points.