Welcome to the Era of the Luxury Polar Cruise 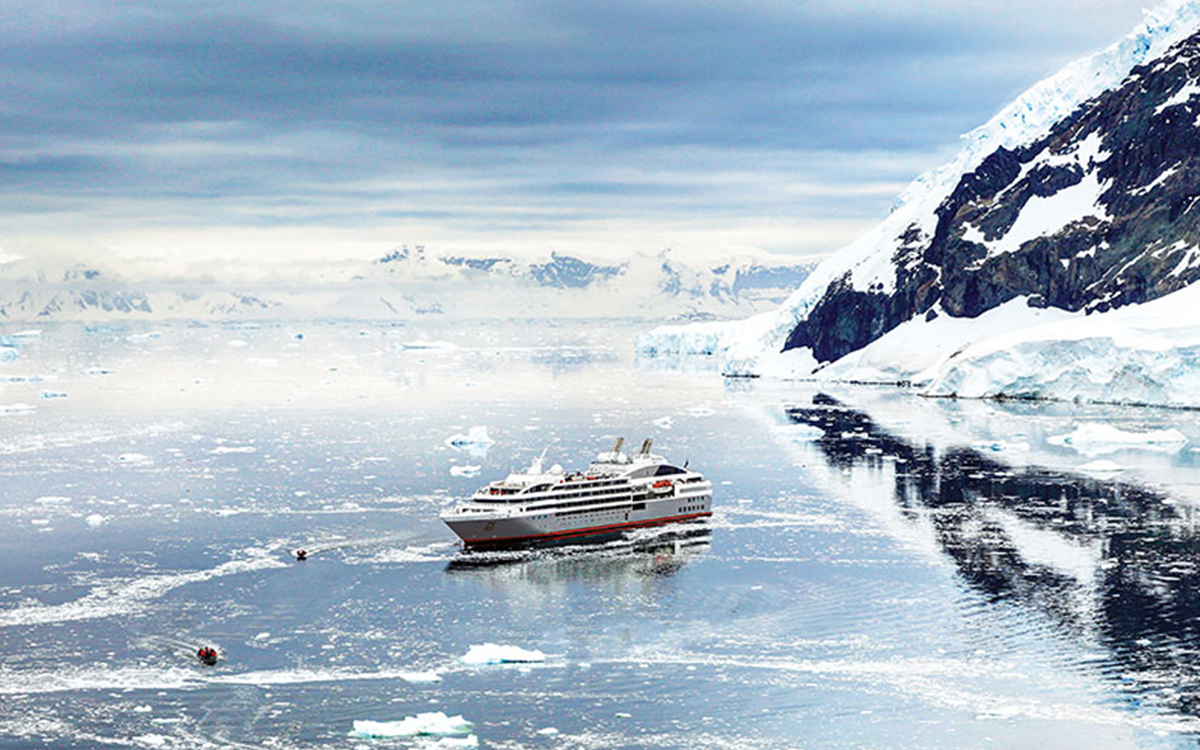 Back in 2016, a cruise ship named Crystal Serenity crossed the Northwest Passage. The route connects the Atlantic Ocean to the Pacific, by following the waterways of the Canadian Arctic Archipelago. A vessel of that size had never been able to make the trip before, but Cruise Serenity accomplished the feat thanks to the proliferation of melted glaciers in the area. As The Washington Post wrote at the time: “[This] journey will mark the first case of mega-scale tourism in one of the last virtually untouched landscapes left in the world.”

They were right on the mark. There have been many cases since, and as reported by Bloomberg, regular travel to both poles is about hit the mainstream. Both customers and operators have incentives for boarding cold weather-bound cruise ships. For tourists, it’s the rare travel experience that hasn’t been belabored on social media or at dinner parties. It fulfills map-pinning bucket lists. It sounds cool. It lets them play Shackleton, if only for a couple weeks. The companies staging the tours are eager and willing to scratch that itch. As Rick Meadows, the president of Seabourn, told Bloomberg: “Experience, that’s become the currency. And they can provide those experiences … while charging six-seven times a voyage to the Caribbean or Mediterranean.

Operators like Seabourn, Abercrombie & Kent, Lindblad Expeditions, Hurtigruten, Crystal Cruises, and Quark Expeditions have all unveiled, or will unveil (over the next two years), expedition ships known as polar-class vessels, which are built to traverse the planet’s coldest waters. It’s easy to see where the $12,000 price tag for these tickets are going; the ships come equipped with mini-submarines, helicopters, indoor pools and whiskey bars. The ostentatious atmosphere is part of the draw, of course. Few people booking these trips are looking to rough it. They’re looking to get their photos with as little discomfort as possible.

In fairness, many travelers compelled to visit these endangered zones — the North Pole, Greenland, Svalbard, Antarctica — also do so with environmental sensibilities. They want to see polar bears, they want to see beluga whales, they want to see these landmasses before they drift away. But there’s an uncomfortable paradox in the style with which people are visiting these places. We wrote a bit about the scourge of “climate change porn” earlier this year. It’s something to keep in mind. If you’re taking one of these trips, search for a polar cruise ship (and there are about to be dozens, literally) like MS Roald Amundsen, with a commitment to green habits.