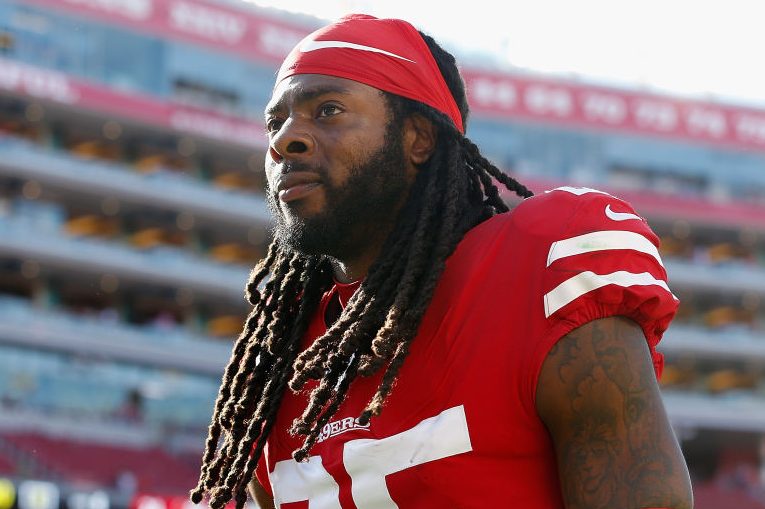 Richard Sherman of the San Francisco 49ers leaves the field after a win. (Lachlan Cunningham/Getty)
Getty Images
By Evan Bleier / October 14, 2019 9:20 am

According to Sherman, ESPN “gauged his interest” about retiring and stepping into the broadcast booth in 2018 after a torn Achilles ended his season the year before. But despite being “offered a lucrative deal to begin his broadcasting career,” Sherman opted to sign a three-year contract with the 49ers.

Witten ended up taking the job and, after struggling pretty noticeably, returned to the Dallas Cowboys this season.

Of course, Sherman’s credibility isn’t exactly sterling at the moment. Last week, he complained about Cleveland quarterback Baker Mayfield refusing to shake his hand prior to taking the field on Monday Night Football.

So Richard Sherman claims Baker Mayfield refused to shake his hand at the coin toss. This video seems to indicate otherwise: pic.twitter.com/4CgOsLKLPL

Afterward, Sherman said he planned to apologize to Mayfield but didn’t mention why he made up the story in the first place.

“It’s definitely my bad,” Sherman told the Pat McAfee Show. “I never want anybody to have to deal with some stuff that they didn’t do. And so, you know, the questions that he’s gonna get and the annoying, nonsense questions about some stuff that happened in a game that’s already been done, you know, sure he’ll get an apology for that. I’ll probably reach out to him via text or social media to actually get a hold of him and talk to him … on the phone. He definitely deserves an apology, and that’s my bad on that.”

Maybe Witten will end up getting an apology as well.