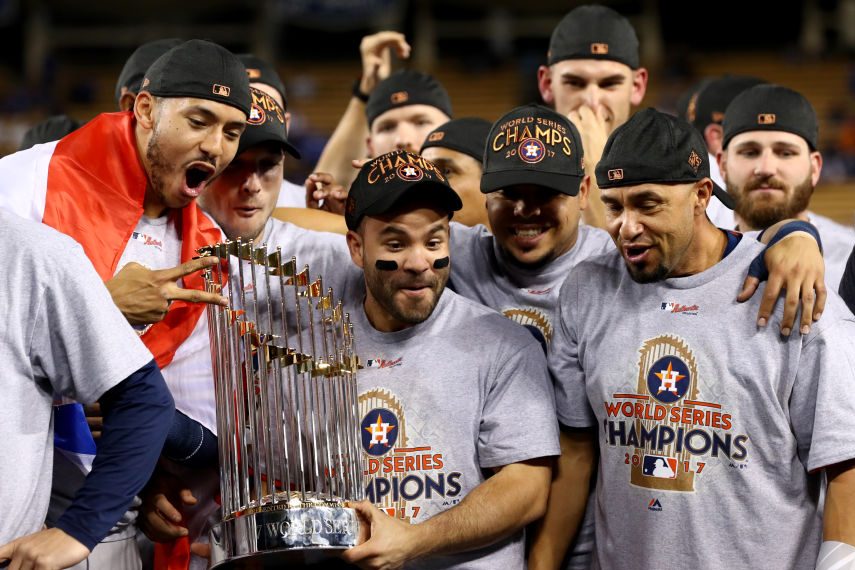 Carlos Correa and Jose Altuve pose for a photo with the Commissioner's Trophy. (Alex Trautwig/MLB via Getty)
MLB via Getty Images
By Evan Bleier / November 12, 2019 5:00 pm

In Major League Baseball, sign-stealing is generally accepted as a part of the game.

But, using electronic devices to do it, as the Boston Red Sox were with Apple Watches in 2017, is not.

If what four people who were with the Houston Astros during the World Series run two years ago say is true, what the Red Sox were accused of doing was far from the most egregious sign-stealing offense that was perpetrated in 2017.

According to what the players, one of whom being pitcher Mike Fiers, told The Athletic, the Astros would routinely use a camera positioned in the outfield and trained on the catcher to steal signs during home games in real-time.

The camera would feed to a monitor near the team’s dugout at Minute Maid Park and players would attempt to match signs with pitches. Once they thought they had a match, they’d bang on a garbage can to signal to the Houston hitter what pitch they thought was coming.

“That’s not playing the game the right way,” Fiers, who was non-tendered after the Astros won the 2017 World Series, said. “They were advanced and willing to go above and beyond to win.”

MLB is investigating the matter and plans to discuss it with ex-assistant general manager Brandon Taubman — who was fired for postgame comments he made to female reporters during the 2019 World Series — as well as other current and former Astros players and employees.

In a statement after the story broke, the Astros certainly did not issue an outright denial. “Regarding the story posted by The Athletic earlier today, the Houston Astros organization has begun an investigation in cooperation with Major League Baseball,” the team said. “It would not be appropriate to comment further on this matter at this time.”

Read the full story at Yahoo