Peter Dinklage's character is at +1000 to rule Westeros at the end of season eight of "GoT."

A screenshot of Tyrion Lannister from "Game of Thrones." (HBO)
By Evan Bleier @itishowitis

When the final season of Game of Thrones, the show’s eighth, wraps up this spring, someone will be ruling Westeros from atop the iron throne.

Who exactly that will be, at this point, remains unclear. And, since it’s uncertain, you can bet on it at select gambling sites.

One of those is Oddshark, which just released its odds on who will rule Westeros at the end of season eight of GoT. 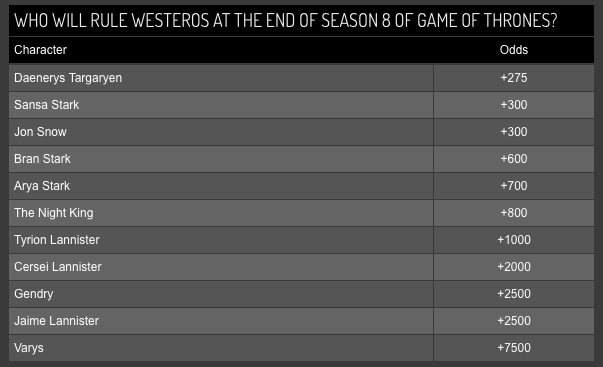 As you can see Daenerys, Sansa and Jon Snow are the odds-on favorites to rule Westeros, and perhaps for good reason. They all have a legit claim to the throne and are all in positions of power on the show.

But, are they the best bets to win it all in terms of value?

Probably not. That honor may belong to Tyrion Lannister, the advice man portrayed by Peter Dinklage.

At +1000, a $10 bet on Tyrion to conquer the throne would net you $100 back. And, as FanSided points out, Tyrion could be a solid choice for the show’s creators as well.

“He drinks, he knows things, and he’s arguably the best suited for an administration job, based on his vast knowledge, resourcefulness, and ability to convince others,” according to the site. “This could be a nice way to wrap up the show somewhat happily for some characters while keeping doors open for a future spin-off. At +1000 odds to rule, Tyrion might make you as rich as a Lannister.”