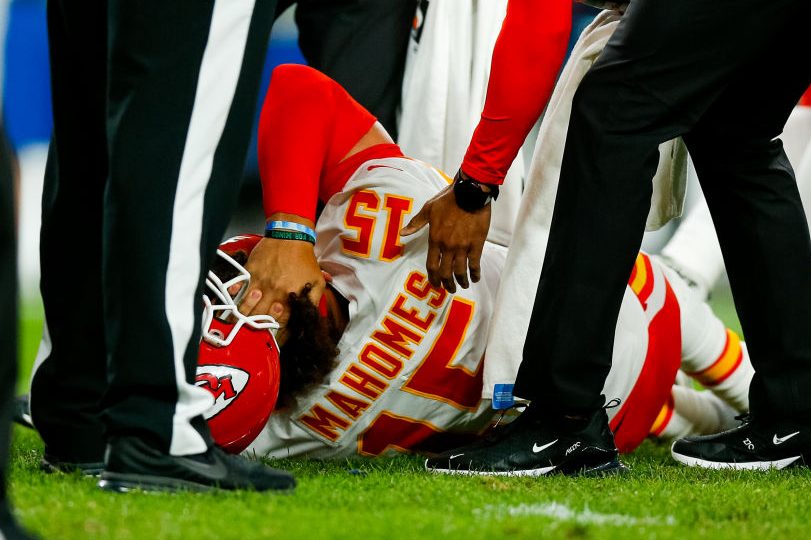 During a successful quarterback sneak near the goal line that converted a 4th and short in the second quarter, Kansas City Chiefs quarterback Patrick Mahomes injured his right knee.

The reigning NFL MVP took off his helmet following the play and lay on the field, covering his face.

Hoping this isn't serious for Patrick Mahomes, who was visibly upset grabbing his right knee after converting on 4th downpic.twitter.com/0MjEbD9zNL

Soon, Mahomes had his right knee attended to by doctors and it appeared that they had to pop the kneecap back into place.

I'm no doctor, but that looked a lot like they just had to pop Mahomes' knee(cap) back into place.

Players from both the Chiefs and Denver Broncos consoled the third-year player after he got up from the ground at Mile High.

Patrick Mahomes is like a superhero. Players from both teams patting him as he leaves the field. No one wants to see him hurt like this #KCvsDEN pic.twitter.com/RSsN0L15DI

The cart drove onto the field, but Mahomes waved it away and limped off with trainers to go get X-rays.

After two minutes in the X-ray room, Mahomes went to the locker room.

Patrick Mahomes went straight to the locker room from the x-ray room pic.twitter.com/s7Ak8XgYuo

Almost immediately, he was ruled out for the game.

Chiefs’ QB Patrick Mahomes out for the night….and how much longer.

At this point, it sounds as if the Chiefs could very likely be without their 24-year-old star for a few weeks and potentially the season.

This here has the good news, bad news, conceding it is long distance analysis.

We pray for the good news on @PatrickMahomes https://t.co/6b4UuhJqAt

Hearing early indications are that Patrick Mahomes has a dislocated knee but at the moment it looks like it isn’t fractured, per a source. MRI coming tomorrow when we’ll know more, but it’s a positive early sign.

Longtime backup Matt Moore replaced Mahomes and will finish out the game for the Chiefs.

If Mahomes is forced to miss extended time, the Chiefs would likely try to find another veteran quarterback to start as Moore is not a good option for long-term success at this point in his career.

Were Eli Manning to waive his no-trade clause, he’d certainly be a possibility.