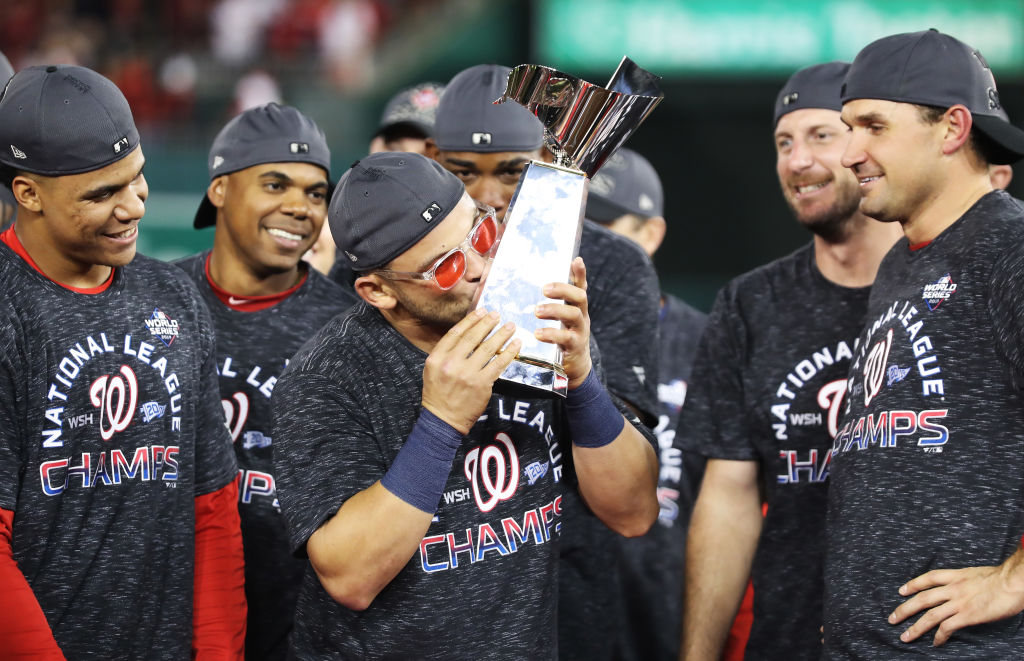 Gerardo Parra #88 of the Washington Nationals celebrates with the trophy after winning game four and the National League Championship Series against the St. Louis Cardinals at Nationals Park on October 15, 2019 in Washington, DC. (Photo by Rob Carr/Getty Images)
Getty Images
By Bonnie Stiernberg / October 16, 2019 9:37 am

For the first time in the history of their franchise, the Washington Nationals are headed to the World Series.

The team advanced Tuesday night after a 7-4 victory against the St. Louis Cardinals, sweeping the NLCS and holding the Cards to just six runs in four games. “I can’t put this into words,” Manager Dave Martinez said after the game. “I’ll say this: Often bumpy roads lead to beautiful places. And this is a beautiful place.”

The National League championship is vindication for a veteran team that lost Bryce Harper and got off to a rough 19-31 start this season. “We knew we were going to be the oldest team in the league,” Max Scherzer said. “Everyone said that was a negative. We looked at it as a positive. I’m one of the old guys. Us old guys can still play. I think the older guys bring a lot of value to the clubhouse. The experience we bring, the emotions we bring, all that helps.”

The series was an embarrassingly one-sided one, with the Cardinals hitting just .130 against the Nationals’ rotation. “They beat us, clearly,” Cardinals manager Mike Shildt — whose infamous postgame speech declaring his team would beat any team they face did not, in fact, turn out to be true — said after the game. “They pitched very, very well … we tip our hat to them and wish them nothing but the best.”

It is going to be a looooong night for the Nats

The Nationals will face either the Houston Astros or the New York Yankees in the World Series on Oct. 22. Game 4 of the ALCS is tonight (Oct. 16) at 8 p.m. EST.