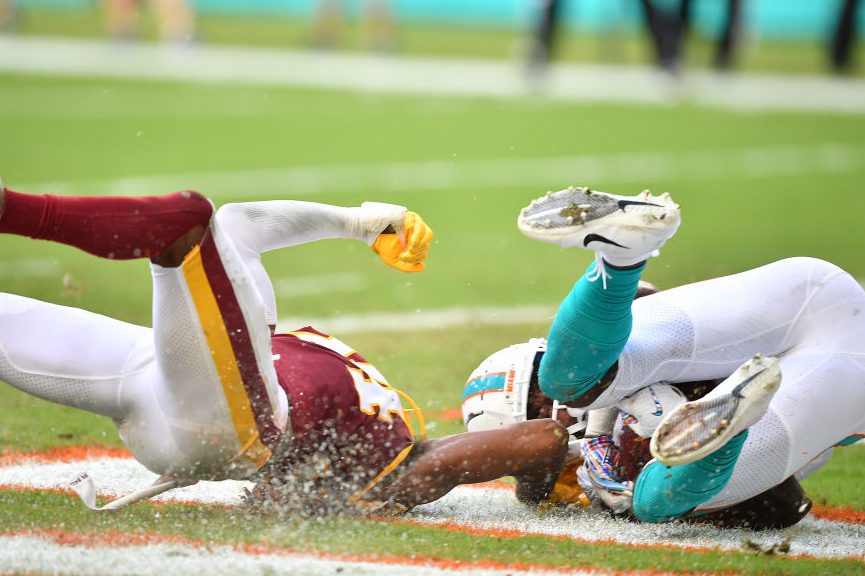 DeVante Parker makes a catch for a touchdown against the Redskins. (Mark Brown/Getty)
Getty Images
By Evan Bleier / October 14, 2019 10:38 am

The Miami Dolphins may have lost their battle against the Washington Redskins yesterday, but they put themselves in a better position to win the war.

Trailing by seven points, Miami scored a touchdown with seconds left and only needed to kick an extra point to send the game to overtime. However, the Dolphins instead opted to try for a two-point conversion which, predictably, failed when running back Kenyan Drake dropped the ball on a play that almost looked like it was designed not to work.

The Patriots ran that for a 2-point conversion against the Falcons in the Super Bowl.

Intentional or not, the 17-16 loss keeps Miami winless at 0-5 and gave the 1-5 Redskins their first win of the season. In the grand scheme of things, losing to the Redskins actually helps the Dolphins in the long run as they now have a better shot at finishing with the worst record in the league and drafting No. 1 overall.

Should that be the case, they’d likely take Alabama quarterback Tua Tagovailoa as second-year QB Josh Rosen has not been impressive as Miami’s starter and went 15-of-25 for 85 yards and two interceptions before being yanked in favor of journeyman Ryan Fitzpatrick.

The only fly in the ointment for the Dolphins is that the Cincinnati (0-6) are also still winless under rookie head coach Zac Taylor and look just as bad as Miami.

Like they did with the Redskins, the Dolphins will have their chance to ensure the Bengals get a win as Miami hosts Cincinnati on December 22.

Read the full story at The Ringer