The two-time Super Bowl winner looked awful and old in a 34-13 loss to the Philadelphia Eagles. 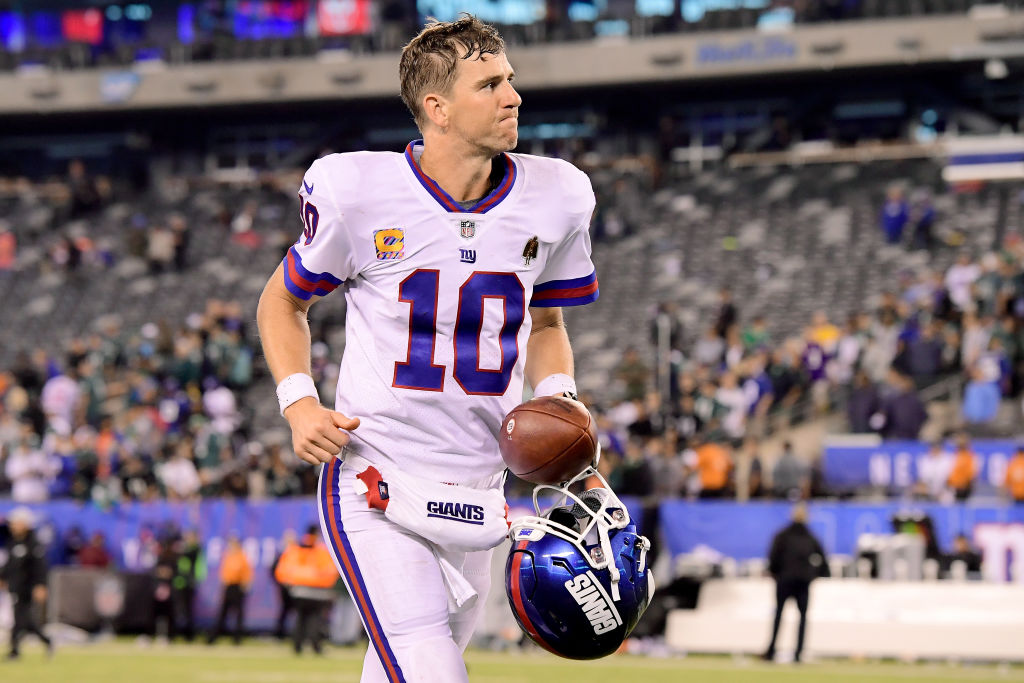 EAST RUTHERFORD, NJ - OCTOBER 11: Eli Manning #10 of the New York Giants walks off the field after his teams loss to the Philadelphia Eagles at MetLife Stadium on October 11, 2018 in East Rutherford, New Jersey. The Eagles defeated the Giants 34-13. (Photo by Steven Ryan/Getty Images)
Getty Images
By Evan Bleier / October 12, 2018 9:04 am

After drafting running back Saquon Barkley, revamping their offensive line, and getting Odell Beckham back healthy and happy, expectations were high for the Giants entering this season.

Then the games started and it became clear the 37-year-old Eli-phant in the room still needed to be addressed. Last night that became even more obvious during a brutal a 34-13 home loss to the Philadelphia Eagles during which Eli Manning completed 24-43 passed for 281 yards, one interception, and zero touchdowns.

And, had it not been for Barkley converting a number of dump-off passes into long gains (nine catches for 99 yards), Manning’s numbers would have looked far, far worse.

Manning’s play was so poor that his teammates, especially Beckham, were visibly frustrated. At one point Manning attempted to hit him down the sideline with a pass that was badly underthrown. Paid like a No. 1 receiver, Beckham had just 44 yards on six catches.

“My confidence in myself is good,” Manning said after the game. “I know I can play. It’s just a matter of we’ve just got to figure out how to be more consistent and be better at home.”

Now 1-5 on the season, the Giants need to think about life without Manning, who is 43-58 in the regular season and 0-1 in the playoffs since winning his second Super Bowl title.

Likely looking at another top draft pick, New York will likely attempt to draft Manning’s replacement and usher him out the door quietly.

“Manning won’t be earning $23 million under center in 2019, the final season on his deal,” writes ESPN’s Ian O’Connor. “His employers will try to put the best possible face on the divorce after the mess they made of the marriage in 2018. Most likely, they will try to persuade Manning to retire as a Giant, to go out with his dignity and his body intact, while eating the $6.2 million in dead-cap hit they’ll take by releasing him.”