Bryant responded to a post about Belichick with compliments for the coach and Tom Brady.

Dez Bryant #88 of the Dallas Cowboys leaves the field after a win against the Oakland Raiders at Oakland-Alameda County Coliseum on December 17, 2017 in Oakland, California. (Photo by Lachlan Cunningham/Getty Images)
By Evan Bleier @itishowitis

Before the 2007 season, the Patriots brought seemingly washed-up wideout Randy Moss into the fold and made him a superstar once again.

Dez Bryant is no Moss, but it appears he’s looking to land a similar career makeover in New England by using his social media skills instead of his pass-catching abilities.

Still looking for a job after failing to latch on with the Browns, Bryant apparently was looking at Instagram and noticed a Bleacher Report piece about Bill Belichick.

Responding to the post, Bryant wrote that Belichick’s “strategy is 1 in a million.” 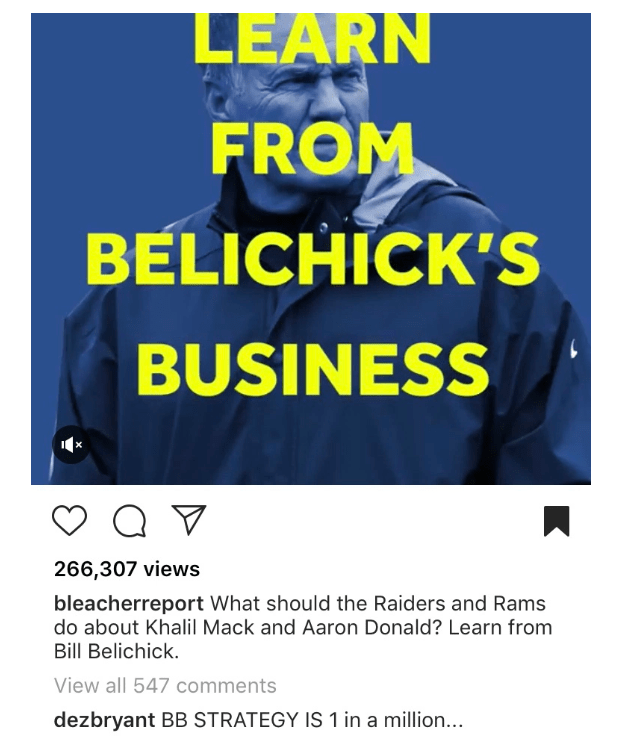 Then, when a Patriots fan commented Bryant should come to New England, Bryant responded with a comment about Tom Brady.

Get ready for the dez spotted at Logan tweets.. @jerrythornton1 pic.twitter.com/WpHJ2B7xWX

Despite the compliments, it’s unlikely Bryant will land in New England.

“Here’s a likely real fact: The Patriots won’t want Bryant, for plenty of reasons,” according to ProFootballTalk. “From a football standpoint, Bryant has spent eight seasons playing one position in one offense. Learning the Patriot Way on the fly would be a challenge that few could overcome.”