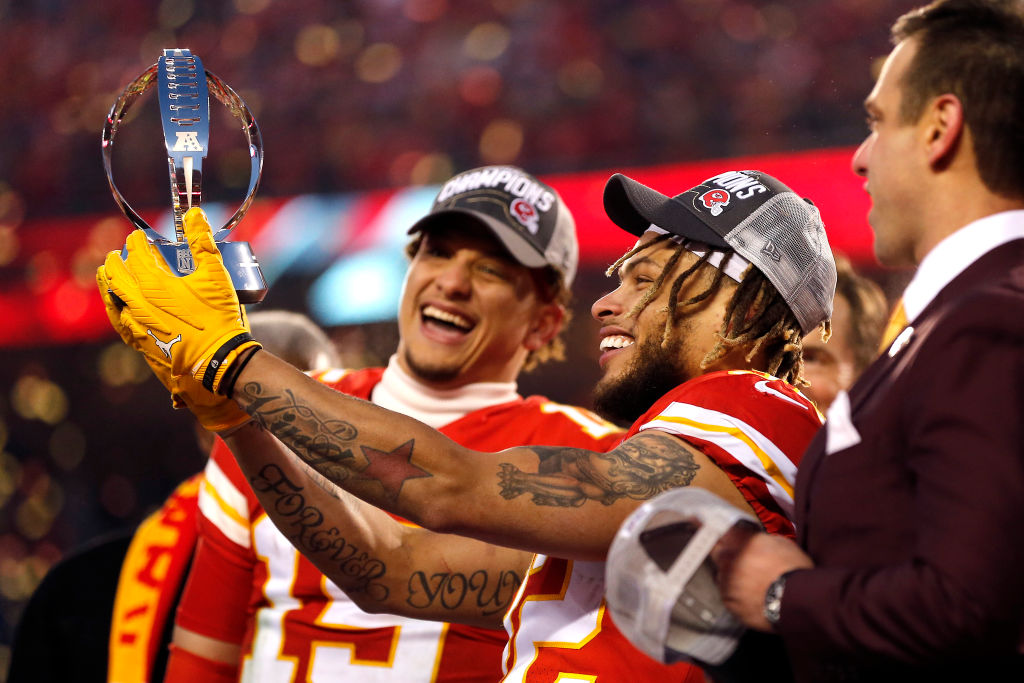 Tyrann Mathieu of the Kansas City Chiefs holds up the Lamar Hunt trophy after defeating the Tennessee Titans in the AFC Championship Game at Arrowhead Stadium. The Chiefs defeated the Titans 35-24.
David Eulitt/Getty Images
By Tobias Carroll / January 19, 2020 7:40 pm

The Kansas City Chiefs will play in their first Super Bowl in 50 years after a thrilling victory over the Tennessee Titans in the AFC Championship Game.

It wasn’t easy for the home team. Tennessee took an early 17-7 lead on a tremendous performance in the first half of the game by running back Derrick Henry, who had anchored his team to impressive victories over the Patriots and Ravens. There’s a down side to centering your offense around one player, though: shut them down and you’ve effectively defanged their entire offense. And once the Chiefs figured that out, they minimized Tennessee’s impact on the rest of the game.

The #Titans played well, but a few things did them in:

2. You can’t routinely let Mahomes outside the pocket.

3. You can’t give up the lead before halftime, knowing you’re a running team.

4. You must force a turnover against the #Chiefs

Besides the home field advantage, Kansas City also had Patrick Mahomes, who had a tremendous game. This culminated in the quarterback making a 27-yard touchdown run with 11 seconds left in the first half. That might make Mahomes’s feat sound less impressive than it actually was; he also managed to dodge what appeared to be half of Tennessee’s defense en route to the end zone. It was a stunning play, and one which catapulted Kansas City into the lead; they didn’t relinquish it for the rest of the game.

Patrick Mahomes becomes the 1st player in Chiefs franchise history to ever record multiple Pass TD and a Rush TD in a postseason game … and he did it in the first half.

The Chiefs lead the Titans, 21-17, at halftime of the AFC Championship. pic.twitter.com/gMgCXRjvI7

Up next for Kansas City: facing off against the NFC Champions on February 2, in what’s shaping up to be a fantastic Super Bowl.