Santa Anita is scheduled to host the Breeders' Cup world championships this fall.

After the deaths of 21 horses over the past two months, a California track has canceled racing indefinitely.

Santa Anita, which is scheduled to host the Breeders’ Cup world championships for a 10th time in the fall, has suspended all races so the dirt surface of the track can be re-examined.

Seven deaths have occurred during races on the dirt track. Five have occurred on the turf course and nine came during training on dirt.

One of the horses that had to be euthanized was Battle of Midway, a five-year-old bay that finished third in the 2017 Kentucky Derby for Hall of Fame trainer Jerry Hollendorfer.

The increased number of deaths has sparked concern and led to a handful of animal-rights activists protesting outside the track’s main gate on Sunday. 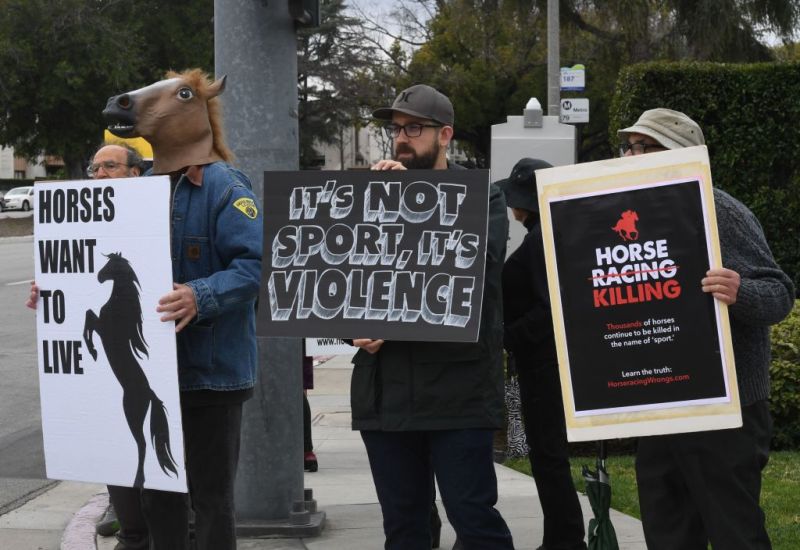 Animal-rights advocates protest the deaths of 21 racehorses in the first two months of this year at the Santa Anita Racetrack in Arcadia, California on March 3, 2019. – Santa Anita averaged more than 55 horse deaths per year from 2008-18, according to data from the California Horse Racing Board, a total of 553 deaths in all, but this year’s major rise in deaths is under investigation. (Photo by Mark RALSTON / AFP) (Photo credit should read MARK RALSTON/AFP/Getty Images)
AFP/Getty Images

Tim Ritvo, chief operating officer of the ownership group that owns Santa Anita, told The Associated Press he wasn’t sure when training and racing would resume.

“Obviously, one horse is too many,” Ritvo said. “The recent rash is just horrible. We need to definitely take a step back and evaluate everything.”

But, Ritvo is confident the ship will be righted and races will resume.

“In whole, we feel confident in the track and we’re just being very proactive,” he said. “We want to do all the testing that needs to be done. When we believe we’re in good shape, we’ll start to train over it again.