Baker Mayfield Mocked As Browns Are Embarrassed by 49ers on “MNF”

Mayfield passed for a career-low 100 yards and had a 13.4 passer rating in the loss 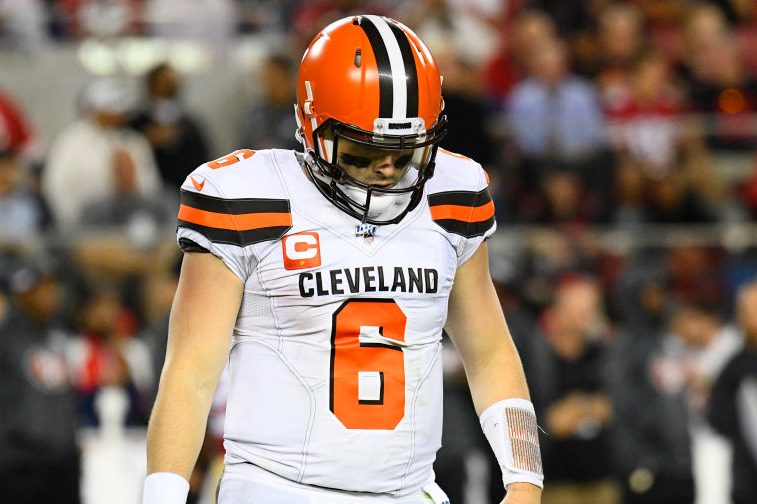 Coming off a massive divisional win against the Baltimore Ravens, expectations that the Cleveland Browns had gotten their season back on track were sky-high heading into a matchup against the San Francisco 49ers on Monday Night Football.

Those expectations came crashing back to earth during a 31-3 beatdown in San Fran that saw Cleveland quarterback Baker Mayfield play extremely poorly and get mocked by 49ers players both during the game and after it.

Late in the second quarter with the Browns already in a big hole, former Ohio State Buckeye Nick Bosa was able to force ex-Oklahoma Sooner Mayfield into an intentional grounding penalty. To celebrate, Bosa mocked when Mayfield planted an Oklahoma flag in the middle of the OSU field after a 31-16 win over the Buckeyes over two years ago.

After the game, Bosa spoke about the gesture and what playing against Mayfield had been like.

“I think everybody knows what that was for,” Bosa said after the game. “Just wanted to get payback. He had it coming … I don’t know how anybody can think he could see over Arik (Armstead) and Buck (DeForest Buckner) but he was panicking, double-clutching, rolling back and forth, we had him rattled all game.”

Bosa’s teammate Richard Sherman revealed after the game that he’d tried to shake Mayfield’s during the pregame coin-toss but the Browns quarterback refused.

“What’s amazing, and annoying, was him not shaking hands at the beginning,” Sherman told NFL.com. “That’s some college s—. It’s ridiculous. We’re all trying to get psyched up, but shaking hands with your opponent — that’s NFL etiquette. And when you pull bush-league stuff, that’s disrespectful to the game. And believe me, that’s gonna get us fired up.”

During the loss for the 2-3 Browns, Mayfield completed 8-of-22 passes for a career-low 100 yards, had a 13.4 passer rating, threw two interceptions, fumbled twice and was sacked four times before being pulled in the fourth quarter.

With the win, San Francisco (4-0) joined the 5-0 New England Patriots as the only remaining undefeated teams in the NFL.