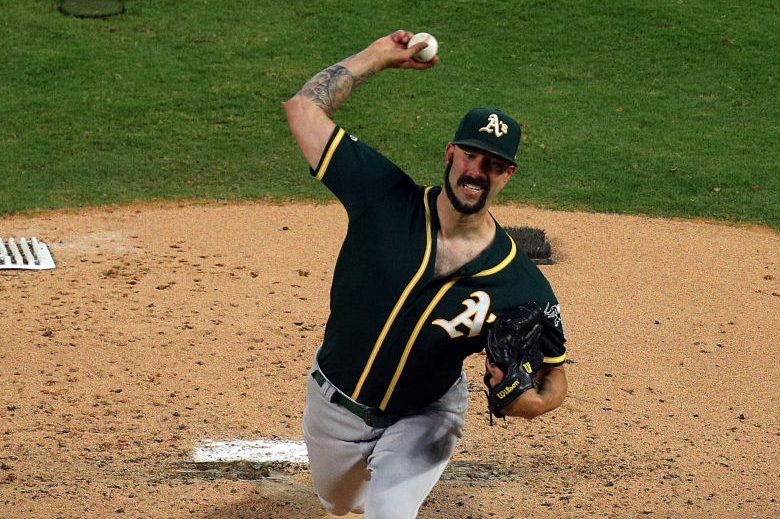 Mike Fiers of the Oakland Athletics pitches against the Texas Rangers in the second inning at Globe Life Park in Arlington on September 14, 2019 in Arlington, Texas. (Photo by Richard Rodriguez/Getty Images)
Getty Images
By Bonnie Stiernberg / September 15, 2019 5:20 pm

Keen-eyed observers of the Oakland Athletics’ 8-6 victory over the Texas Rangers on Saturday (Sept. 14th) may have noticed something was missing. A’s starter Mike Fiers took the mound without a chunk of his facial hair, sporting a bizarre beard that resembled the letter G.

Fiers, who appeared before the media clean-shaven after the game, explained that it was a goofy idea to create good morale in the clubhouse as the team continues to chase an American League wild card spot. “We were just looking up fun things to do because I was thinking about shaving my beard and starting fresh,” he said. “But we were thinking about something funny to do and we were searching on Google for funny beards and that was one of them that came up.”

However, Fiers wound up leaving the game in the second inning after experiencing nerve irritation in his throwing arm — meaning, of course, that the weird beard had to go. “I got hurt,” Fiers explained when asked why he shaved. “I can’t continue that. Just had to shave that off. One-start thing.”

The pitcher said he experienced numbness in his arm and underwent testing to determine the cause. “It was just the one pitch,” he said. “I threw it, my hand went numb, and I had to wait for some feeling to come back. It was more mental at that point than anything. Altering my delivery is something that you don’t want to do. You can get injured further doing that.”

The A’s expect the test results to come back on Monday.