Adidas Will Fight Anyone Trying to Trademark Stripes. Its Latest Target: J.Crew.

The sportswear company has filed 16 trademark opposition cases this year

Adidas believes its three parallel stripes are so iconic that no other brand can trademark stripe designs.
Christian Wiediger/Unsplash
By Alex Lauer @alexlauer

While Adidas has been publicly vying for your sneaker dollars against the Nike juggernaut, they’ve been privately waging a war in the trademark office over the use of stripes. The brand’s latest target is J.Crew.

According to Law360, J.Crew filed a trademark application last year with the United States Patent and Trademark office for a design consisting of five parallel bands of color including burgundy, ivory, navy blue, ivory and burgundy, in that order. The clothing brand hoped to use the five-stripe design “on apparel ranging from tops and shorts to bowties and pajamas, as well as handbags, luggage, business card cases, and beach bags,” writes The Fashion Law. Then last week, Adidas swooped in to block it. 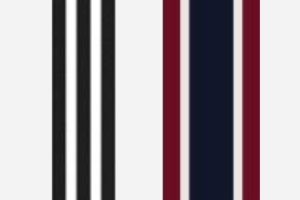 The Adidas stripes [left] versus the proposed J.Crew trademark design [right]. Are they too similar?
Adidas claims the five multi-colored stripes proposed by J.Crew are too similar to its own three black stripes. Specifically, as quoted in The Fashion Law, the sportswear company “believes that [it] will be damaged by the issuance of a registration” to J.Crew; it worries that consumers will assume that J.Crew is “affiliated, connected, or associated with [adidas]”; and it is hopelessly verklempt that J.Crew’s design would “dilute the distinctiveness of the three-stripe mark by eroding consumers’ exclusive identification of the three-stripe mark with adidas.” Really.

If that sounds paranoid, ridiculous or indefensible, you’d be right on the first two. Adidas has been fighting a constant battle to protect its stripe design, many times successfully. In 2019 alone, the company has filed 16 Trademark Trial and Appeal Board cases, according to Law360.

In 2017, it challenged Tesla’s Model 3 logo, and Tesla changed it (though reportedly not because of Adidas). That same year, it settled a case out of court against Forever 21 who called Adidas a “bully.” But it hasn’t been a clean sweep — this past June, a huge trademark push for the design in the EU failed.

Against J.Crew, however, Adidas is looking like it will win out. According to The Fashion Law, the brands “are attempting to resolve their trademark differences on their own.” Will J.Crew stand up to the bully? Or will it stay on its downward trend to irrelevancy?

InsideHook’s Guide to Black Friday 2021
The 100+ Best Gifts for the Women in Your Life
The 102 Most Stylish Gifts to Give This Holiday Season
Six Key Black Friday Sales to Shop Right Now
Review: The River House at Odette’s Is a Bucolic Hidden Gem 90 Minutes From NYC
The 5 Best Restaurants That Opened in SF This Fall
What Happens When Paul Thomas Anderson Makes a Feel-Good Movie?
The 6 Best Restaurants That Opened in LA This Fall
Don't Miss Farfetch's Black Friday Sale on Sale Event