The famously beefy golfer has lost 20 pounds in a month

The 29-year-old golfer is looking svelte these days. What gives?
Patrick Smith/LIV Golf via Getty
By Tanner Garrity @tannergarrity

During peak quarantine, Bryson DeChambeau turned his garage into a cutting-edge performance lab. After months of strength training (you can watch him get after it here) he looked more like Gronk than a professional golfer. DeChambeau reportedly put on 20 pounds, drawing compliments from Tiger Woods and gaining distance on his already-towering drives.

Fast forward a couple of years and the poster boy for bulking (who has since abandoned the PGA Tour for LIV Golf) is actually headed in the other direction. DeChambeau is looking atypically svelte these days, and has apparently lost 20 pounds, which he confirmed in a recent appearance on the golf podcast Five Clubs with host Emma Carpenter.

Is the 29-year-old now anti-bulking? Not necessarily. But he seems to have soured on the methods that catapulted him into stardom throughout 2020 and 2021, when he came fourth at the PGA Championship, won the U.S. Open and finished third at the Players Championship.

DeChambeau is now skeptical of the caloric intake he needed during that time to pull off his rigorous strength training schedule. He was eating 3,500 calories a day, and the menu, frankly, was insane:

Throughout his conversation with Carpenter, DeChambeau goes full physics-nerd on the relationship between arm angle, body power, ball speed, etc., and clearly feels he’s lost his mechanics at times over the last few years (leading to more “duck hooks”…and early exits from tournaments). It makes sense that he’s interrogating his relationship with weight-lifting in light of that fact.

But don’t expect DeChambeau to quit the gym. He knows — like practically every other modern golfer — how important strength training is to the game now. (The game’s best now appreciate what Tiger understood decades ago; lifting makes you more injury-resistant, not susceptible, and represents one’s best chance to increase clubhead speed.)

The outspoken pro doesn’t need to be the biggest man on either tour, though, and especially not if his eating cadence is tearing his body apart, which appears to be what was going on behind the scenes over the last year.

“I ate things that were not great for my system that I was very sensitive to,” DeChambeau said on Five Clubs. “Ultimately it got to the point where it was a little too much. And that’s why I started to back off of that…I ate improperly for almost a year and a half and I was starting to feel weird. My gut was all messed up, and so I went completely healthy, went on a Whole 30 diet, got a nutritionist, did blood work, measured stuff in my gut biome. I was super inflamed. And then just recently since I’ve been using this new chef, I lost 20 pounds in a month.”

“The inflammation has just left my system, and I feel a lot more at ease,” DeChambeau continued later. “I mean, I’m a lot leaner now, I feel better, my face has thinned out finally… I look like I’m 20 again, not 35…. [It’s better to] get stronger in a healthy way. Go get a blood sensitivity test and figure out what works best for your body to gain size and strength.”

How heavy is he now? Unclear — maybe a little under 220 or so (and he stands at 6’1″). That still puts him around the size of a slugging first baseman. Don’t expect him to lose too much on his 323-yard average drive.

And while DeChambeau’s comments on health have sometimes been maddening, his shift from protein-packing (which felt very “high school locker room,” no matter how new lifting may be for the sport of golf) to a focus on the health of his gut (one of the most important and unheralded parts of the body) is a big deal.

This is refreshing to hear from a brawny male sports icon, considering men have a habit of neglecting their microbiomes, and in the long-term, it’s promising for DeChambeau’s game. Protein shakes may extend a drive, but inflammation can torpedo a chip shot any day. 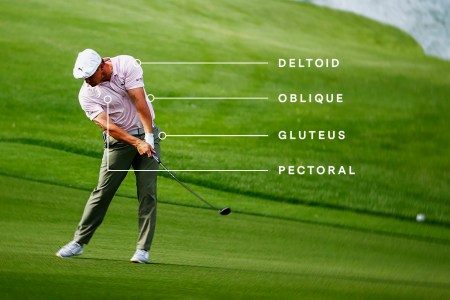 Excerpt: Jason Gay Reflects on the Humbling Nature of Golf in His New Book “I Wouldn’t Do That If I Were Me” 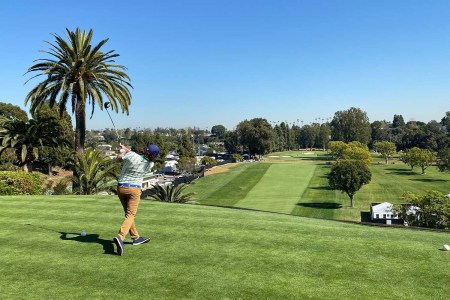