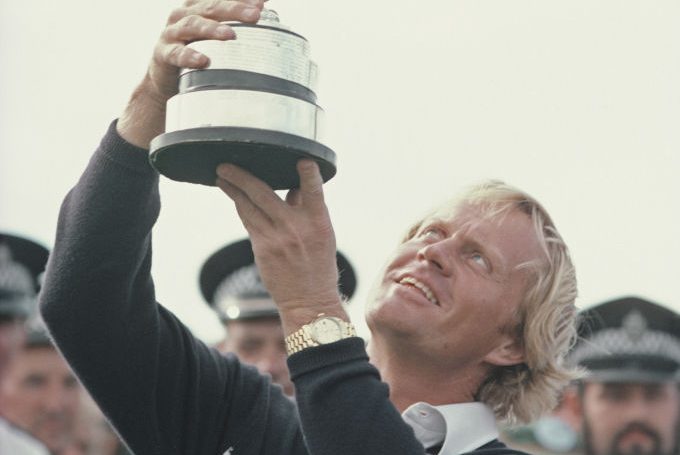 One of the greatest ever to tee off has decided it’s high time to put his prized gold Rolex watch on the block.

Jack Nicklaus, golf’s all-time leader in major victories with 18, will be selling off his Oyster Perpetual Day-Date Rolex with all the proceeds going to benefit his charity.

A constant on the 79-year-old’s wrist since it was gifted to him by the watchmaker as a thank-you present for attending a Rolex cocktail party in Tokyo during the 1966 Canada Cup, the timeless ticker is likely to fetch seven figures and has the potential to be one of the most expensive pieces of sports memorabilia ever sold when it crosses the auction block courtesy of Phillips on December 10 in New York.

Often photographed when Nicklaus was hoisting a championship trophy following a win, the watch features 18-karat yellow gold and is fitted with a “pie‐pan”‐style dial with tapered and faceted baton hour markers.

“When I hit the course, the watch would go into a little pouch and then into my golf bag,” Nicklaus told Robb Report in 2017 when the prospect of auctioning the watch was first mentioned. “When I would finish up on the 18th, I’d put my wallet back into my pocket and my watch back on my wrist. That’s why you see it in every picture of me holding a trophy over the last 50 years.”

Nicklaus first got the idea of selling the watch when he saw the $17.8 million sale price Paul Newman’s Rolex Dayton brought in following a 12-minute bidding war in 2017, a new record for a wristwatch at auction.

And the Golden Bear won’t be lining his pockets with the proceeds from the sale of his golden Rolex as the entire auction price, including Phillips’ cut, will go to benefit the Nicklaus Children’s Health Care Foundation.

Visible on Nicklaus’ wrist after 12 of his major titles, the watch likely won’t fetch as much as Newman’s because it is not as rare a model, but it should still bring in enough to make the accountants at the Nicklaus Children’s Health Care Foundation quite pleased.

“Parting ways with this watch is certainly bittersweet,” Nicklaus said in a press release. “While I will certainly miss the opportunity of wearing the watch and having it serve as a constant reminder of some of my life’s most memorable moments I know that parting with it will help countless children and families impacted through the work of the Nicklaus Children’s Health Care Foundation. I have said many times that the work being done by our Foundation and Nicklaus Children’s Hospital is far more rewarding than any four-foot putt I made to win a golf tournament.”

Here’s Nicklaus explaining a bit more about the watch:

After being put on display at the Jack Nicklaus Museum in Columbus on May 29, the watch will be displayed in London, Geneva, Hong Kong and throughout the U.S.

“A tour‐de‐force of athleticism and philanthropy, Jack Nicklaus is the greatest golfer of all time, revered by sports fans around the world. We are honored to present this superb Rolex Day‐Date Reference 1803 in our December auction,” said Phillips head of watches Paul Boutros. “With its incredible provenance and timeless aesthetics, we look forward to seeing an enthusiastic response from collectors, golf fans, and charitable supporters, who, in addition to vying for one of the greatest timepieces associated with an iconic sports legend, will have the opportunity to raise funds to positively impact the lives of children.”