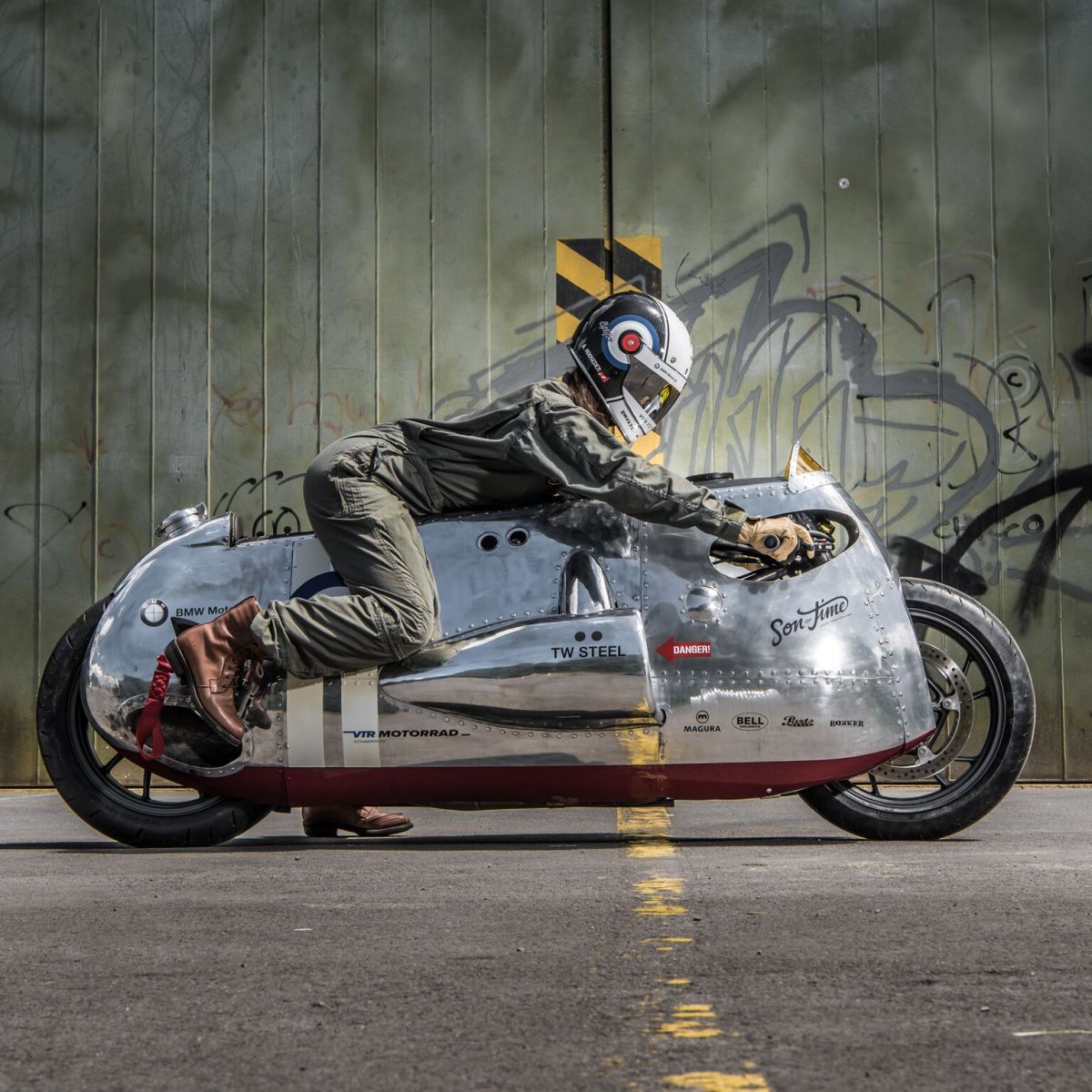 The one-off Spitfire from BMW Motorrad and VTR Customs in Switzerland (Andri Margadant via www.photocab.ch)
By Evan Bleier / May 31, 2018 5:00 am

The new, one-off Spitfire drag racer from VTR Customs is modeled after one of the biggest stars from Christopher Nolan’s Dunkirk—and we don’t mean Tom Hardy.

With a chrome-laden design clearly evoking the fuselage of the single-seat Spitfire fighter planes that Britain’s Royal Air Force used in World War II, the motorcycle also earns its name because VTR outfitted it with a ridiculous, fire-spitting exhaust system. 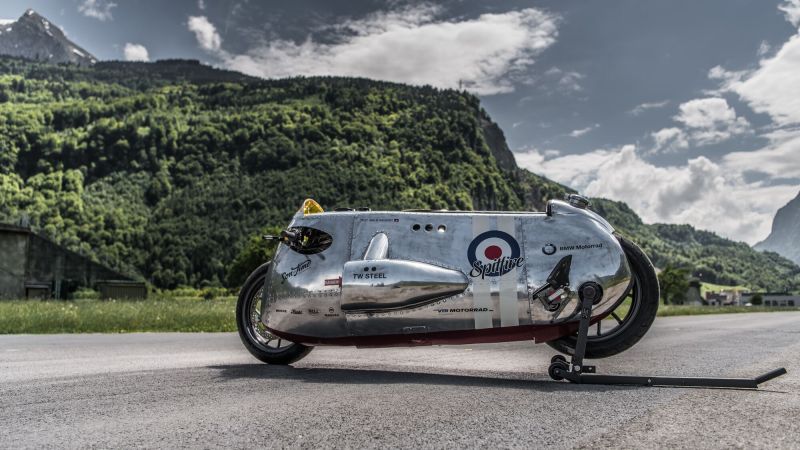 Side view of the one-off Spitfire from BMW Motorrad and VTR Customs in Switzerland.(Andri Margadant via www.photocab.ch) 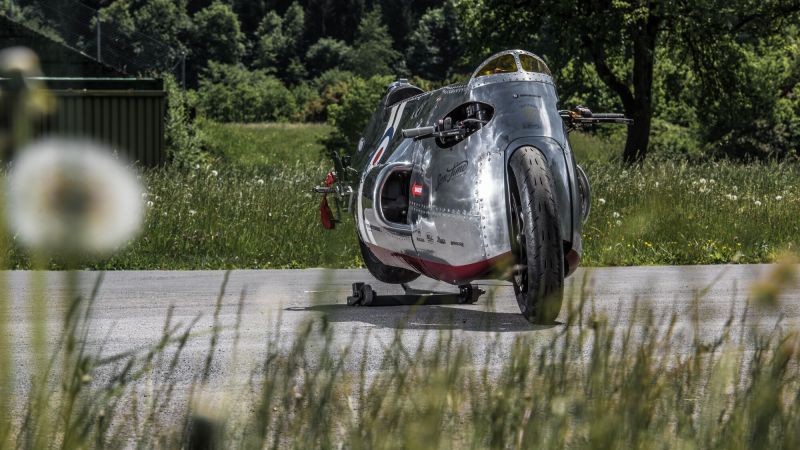 According to VTR boss Daniel Weidmann, he got the idea for giving the Spitfire what amounts to a rear flamethrower because he wanted to replicate the spitting flames and smoke he saw shooting from plane engines while working as a technician on classic aircraft earlier in his career.

“As a maintenance guy of this WWII fighter, I remember the spectacular engine start up with the big radial engine of the plane I was working on,” Weidmann told RealClearLife. “I felt immediately that we must build this idea and have it shaped and designed as an aircraft from WWII.”

Built out over four to five months, VTR used a 2017 R1200 R supplied by BMW Motorrad as a base model for the Spitfire and then lowered it by about a foot.

Using a hand-drawn sketch instead of a 3D design created on a computer as a blueprint, VTR did all the metalwork on the bike’s aluminum alloy body by hand, using hammers, sand sacks and an English wheel. 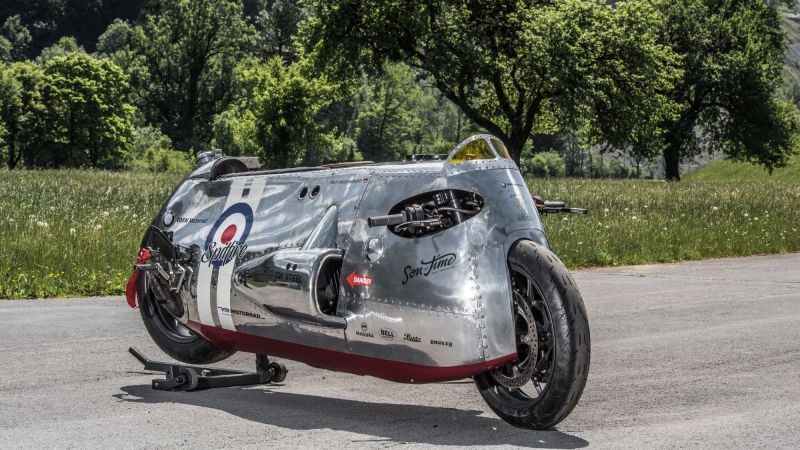 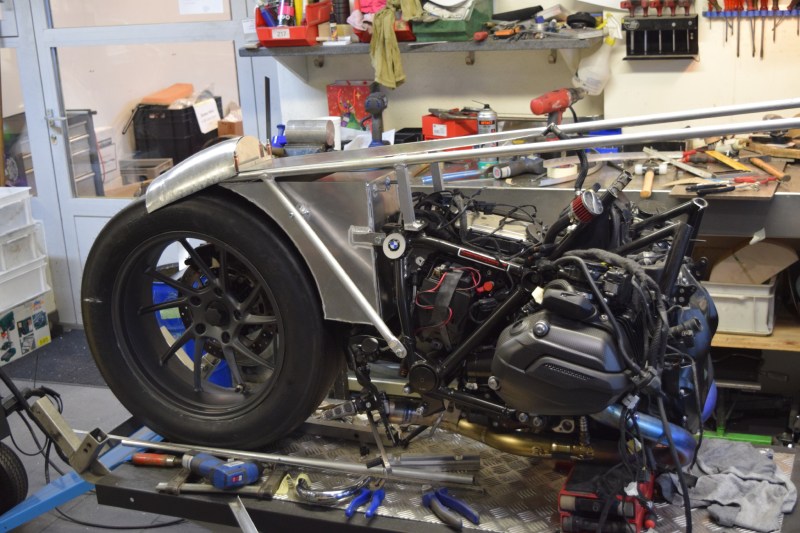 The Spitfire kept the BMW R1200 R’s standard 125-HP engine—which some estimate could hit up to 160 miles per hour. (Andri Margadant via www.photocab.ch)

Using his experience as a classic aircraft technician as a guide, Weidmann added details to the aluminum body and seat upholstery that mimicked the builds of aircraft fuselages and the interior of vintage cars.

To add further authenticity, VTR sourced original instruments and start switches taken out of a Spitfire cockpit from a supplier in the UK and installed them on the bike. 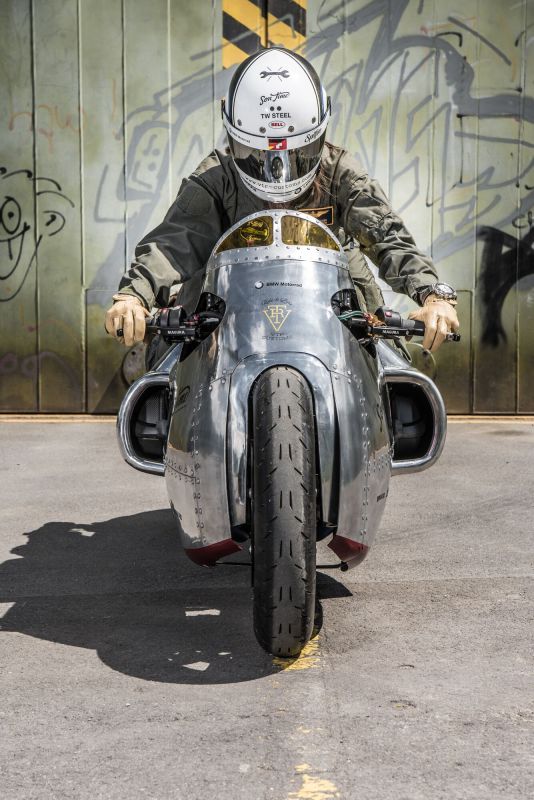 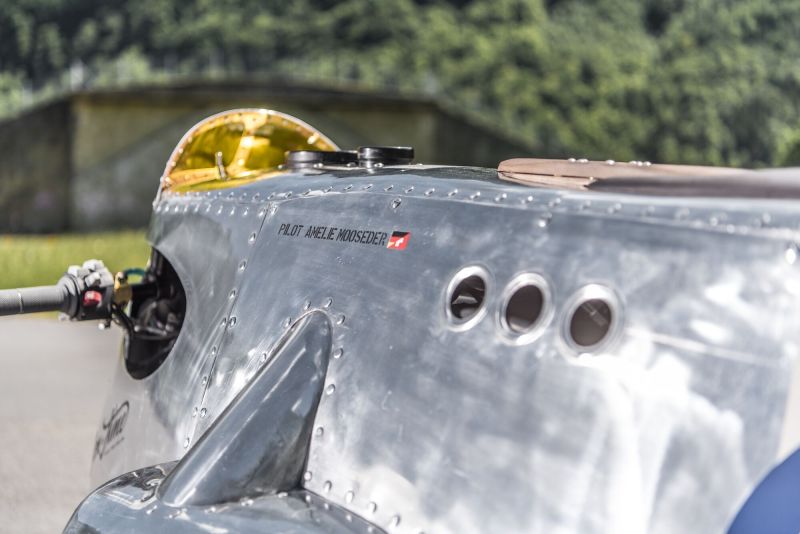 The top-side view of the Spitfire. (Andri Margadant via www.photocab.ch)

Since VTR wanted the bike to meet Factory Class racing regulations, they didn’t do much tinkering with the engine and left the R1200 R’s original two-cylinder boxer largely untouched.

The lack of modifications didn’t hurt the Spitfire any during its initial foray into competition, as the 125-HP bike—which Weidmann estimates can hit up to 160 miles per hour—came in second at its first race in Monza. “The bike itself is a bit difficult to ride,” Weidmann acknowledged, “but it’s good to win.” 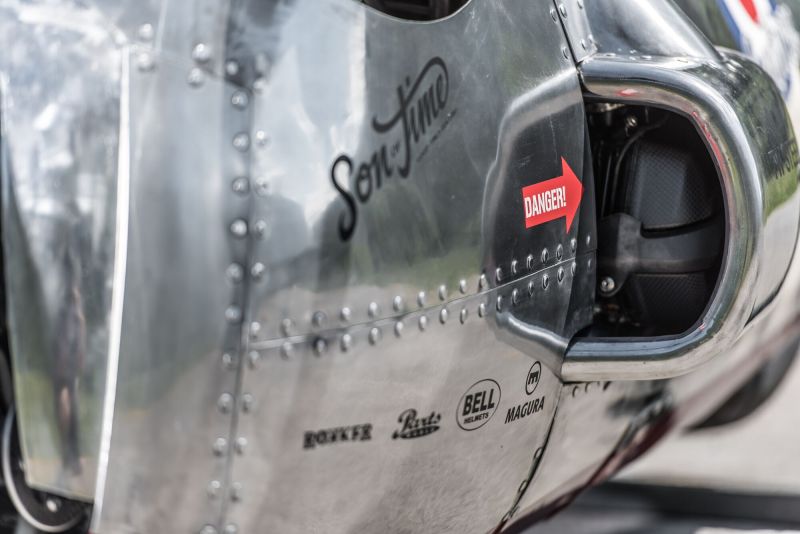 The side-mounted intake of the Spitfire. (Andri Margadant via www.photocab.ch) 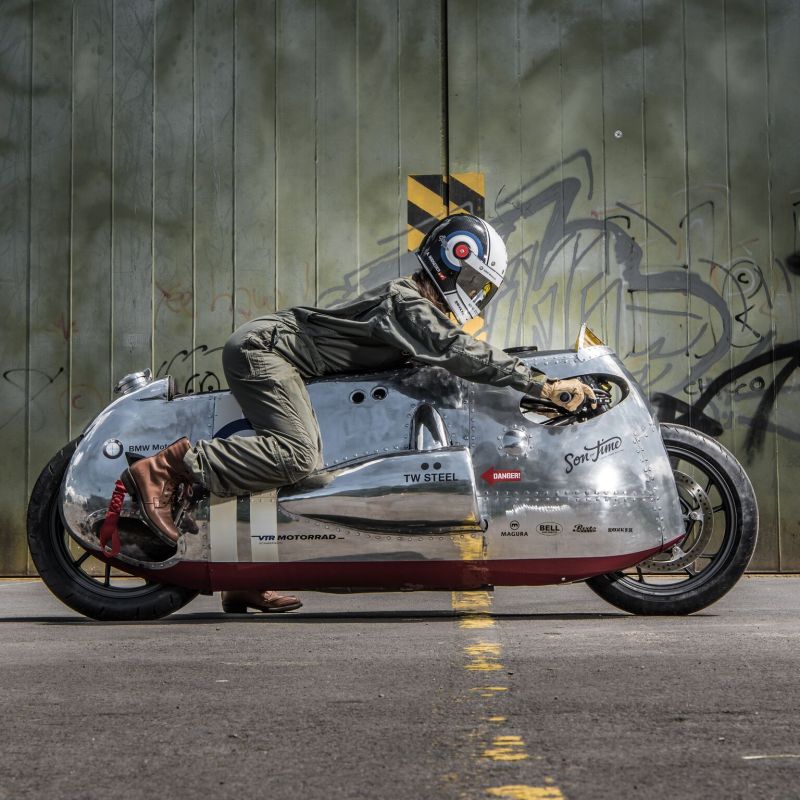 The riding position of the Spitfire is an incredibly aggressive, forward posture. (Andri Margadant via www.photocab.ch)

As for the flame-spitting exhaust system,  it wasn’t used during the race for safety reasons. “We only use this before and after races to scare our competitors,” Weidmann told Bike Exif. “While racing, the system is off.”

The Spitfire’s rider is able to control the flaming tailpipes thanks to a toggle switch in the cockpit that activates a fuel spray nozzle that’s connected to the gas tank.

When the switch is flipped, the injector nozzle sprays fuel on a spark plug that’s been mounted in the exhaust and, voila, Spitfire. 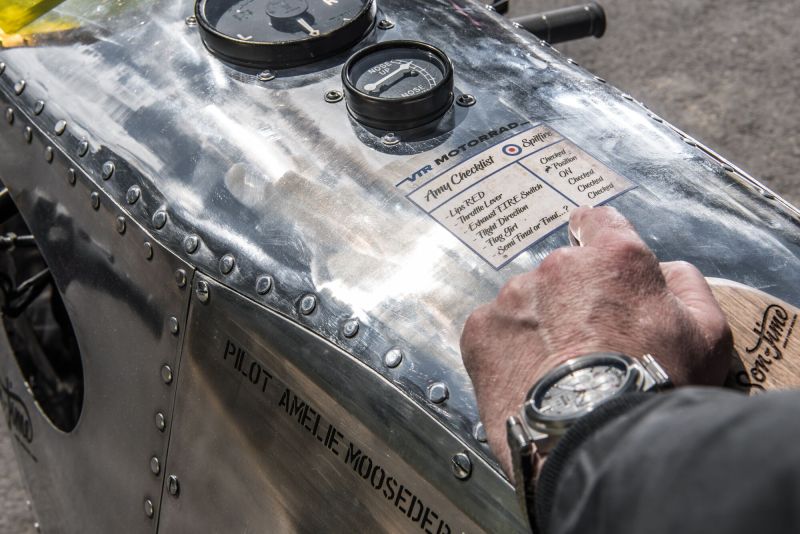 A start-up checklist for the Spitfire sits atop the cycle’s fuselage. (Andri Margadant via www.photocab.ch) 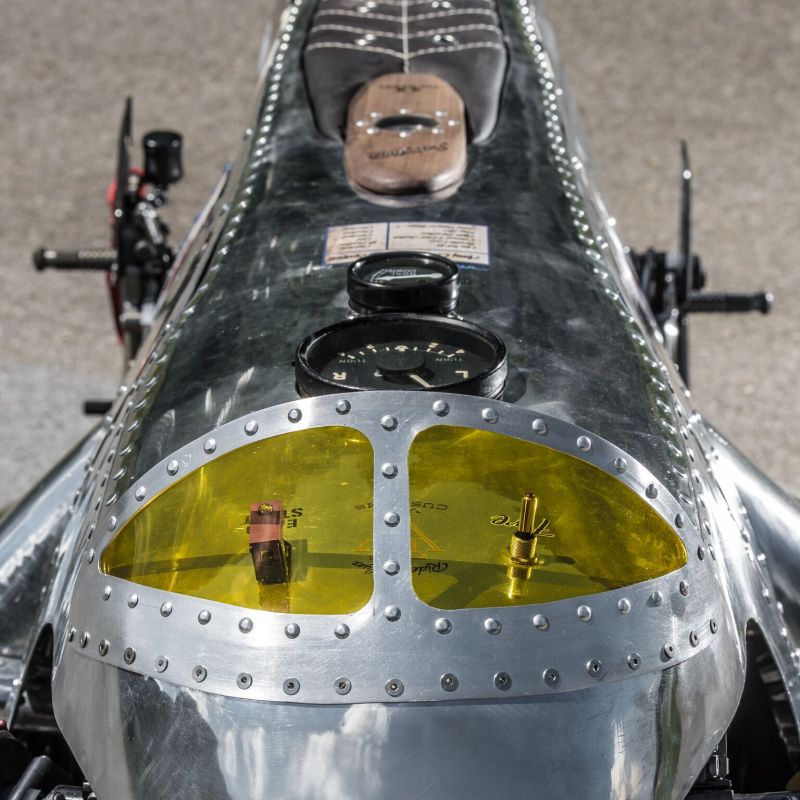 The Spitfire’s toggle switch (seen through wind visor, right) injects fuel into the exhaust over a spark plug, to send flames out of the motorcycle’s rear end. (Andri Margadant via www.photocab.ch)

“We are very happy and very proud of the outcome,” Weidmann said. “The build of the bike took us to many challenges where we had two ways forward: compromise or do it again. We always went the second way: no compromises. We are happy we did take that road, even it took us sometimes to our limits.”