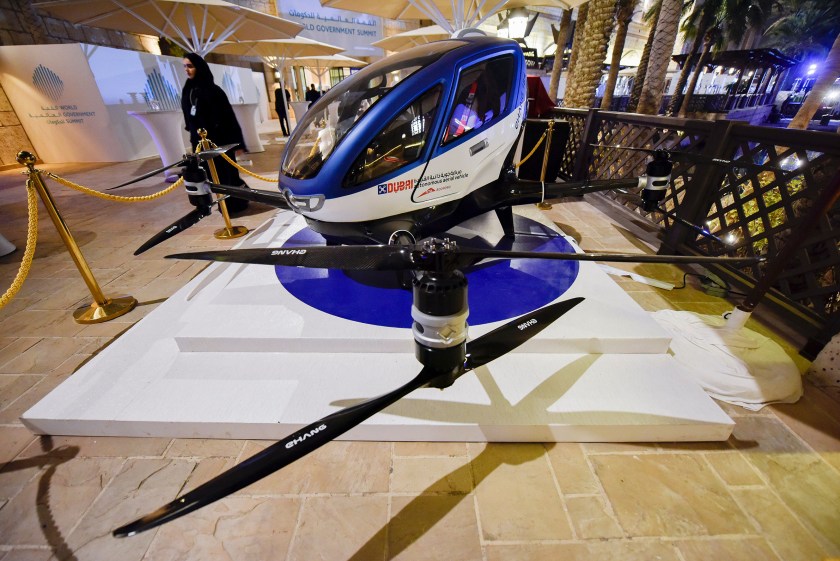 A model of the EHang 184 autonomous aerial vehicle is displayed at the World Government Summit 2017 in Dubai’s Madinat Jumeirah on February 13, 2017. (Stringer/AFP/Getty Images)
AFP/Getty Images

Drones could be ferrying tourists around the skies of Dubai as early as this summer, according to the city’s transportation authority.

After debuting a year ago, the Ehang 184 could be introduced as early as July in a milestone for the transportation industry. The autonomous flying taxi project is part of a plan by the city to have 25 percent of its transportation be self-driving by 2030.

Capable of carrying one passenger, the electric drone travels on a pre-programmed course, selected by the passenger and approved by a flight control center, at approximately 60 miles per hour. Chinese drone manufacturer Ehang has built the autonomous taxi, which travels 1,000 feet in the air, has a maximum flight time of 30 minutes, and recharges in two hours.

The announcement was made after the Ehang 184 was successfully tested in Dubai. It comes on the heels of another futuristic transport concept announced in November. Hyperloop One is planned to connect Abu Dhabi with Dubai. Watch a test flight below.