The 2017 Chevy Cruze Is a Severely Underrated Off-Roading Vehicle

And other sh*t they don't tell you in the manual

When it comes to driving to remote locations in a timely manner, speed is undoubtedly a virtue. But as a famous race between a hare and tortoise made clear, steadiness is also a valuable — if oft-overlooked — attribute. Steady as a mountain goat (and able to give the hare a run for his money too): the 2017 Chevy Cruze, an appropriate car for traversing the domain of the tortoise, the desert of Joshua Tree, where we drove one a fortnight ago.

Here’s how she fared in the ol’ wild west.

… in the city? Despite having enough cargo space (47.2 cubic feet) to accommodate anything you’d need in the desert for fun, survival or shallow burial, the Cruze is a compact car, and it handles like one. It nimbly zips in and out of tight spaces, and when there’s a situation that requires a bit of extra boost, the car’s 1.4-liter turbo engine supplies it.

… on the freeway? A Porsche it ain’t, but the Cruze isn’t going to slow you up either, with a 0-60 time of 7.7 seconds. The car’s forward collision alert system notifies you to ease up if it senses an accident incoming. That feature can feel unnecessarily cautious at times, but maybe that’s a good thing.

… in the desert? Even where the pavement turns to packed dirt or sand moguls, the front-wheel-drive Cruze is able to tread. Relying on its 18-inch wheels to avoid falling into sand traps, the Cruze can navigate the ups and downs of off-road terrain (slowly) without giving its passengers too bumpy of a ride. The six-speed transmission also means low gear is an option.

Why does it handle like that? The driver, obviously. (Ha!) But the Cruze also comes with an electronic StabiliTrak  stability system, which senses when the driver makes a sudden turn and then automatically adjusts the engine torque and applies precise pressure to the brakes if it determines the car isn’t moving where the driver intends.

How often does it need a fill-up? With a 14-gallon fuel tank, the Cruze gets 29 miles per gallon in the city and 38 MPG on the highway. We were courteous enough not to return it empty, but the Cruze probably could have done LAX to Joshua Tree and back with some side trips to boot on a single fill-up.

What’s the interior like? Well thought-out. The infotainment system sits front and center, and its seven-inch touchscreen allows you to easily use the car’s on-board navigation system or connect your navigation option of choice via USB. Both the seats and steering wheel can be heated when temperatures drop at night, and there’s a sliding sunroof to use when the sun rises. A rear USB port also allows backseat passengers to charge their devices without bothering the driver.

Can my kid drive it? Yup, and you can feel good about it. The Cruze has a new “Teen Driver” feature that lets you limit features of the vehicle and stops safety features from being switched off. You can also get a report from the car about how it was used to let you monitor your kid’s driving habits. There are also 10 airbags.

Will they want to? Probably. The car has a pretty decent standard sound system (a Bose upgrade with extra speakers is an option) and the SiriusXM should keep them satisfied. If for whatever reason it doesn’t, the car can also be turned into a mobile wifi hotspot so they can use Spotify, Tidal or wherever else the kids are getting their music these days.

Will I want to? That all depends on you. The Cruze probably isn’t going to turn any heads when you pull into the golf club or campground, but when you pull enough gear for a full weekend of roughing it out of the trunk, you’ll probably get a couple of nods of approval. The safety features the Cruze offers also make it a decent starter car for an inexperienced driver.

Where should I go if I test drive it in Joshua Tree? There’s a lot to see, but start with this. 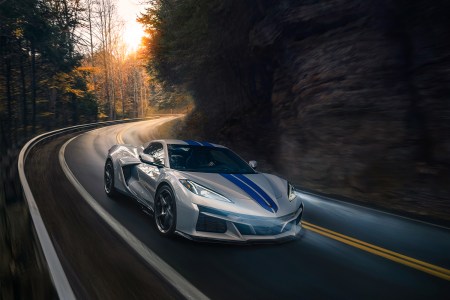