The 5 Best Things to Do in Pinnacles National Park 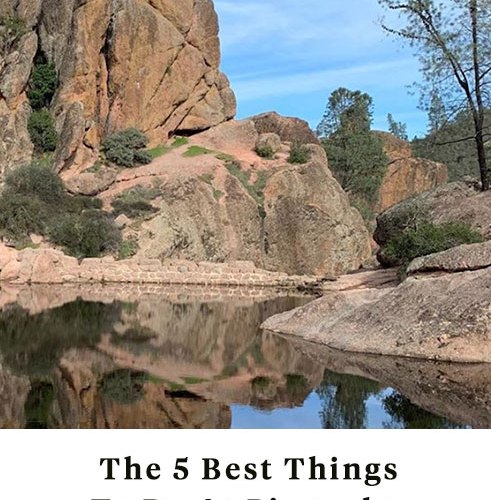 This one-time national monument-made-good is Northern California’s newest national park — it only earned the title in 2013, when President Obama signed it new designation into law. Eighty miles south of San Jose, Pinnacles is especially convenient for those in the South Bay. It’s compact — at 26,000 acres, it’s about 1/30th the size of Yosemite — but offers a wide variety of activities. These are our favorites.

Do most any hike at Pinnacles and you’re likely to see rock climbers on your way, hoisting themselves up the park’s rock walls. Looking to learn the basics? Sign up for a day-long basics course with an outfitter like Adventure Out.

California condors might not win many beauty contests (“Condors are striking birds that can be viewed as ugly or majestic, depending on who you ask”), but they are indisputably compelling, with a nine-foot-plus wingspan, and their resurgence in the park is reflective of statewide efforts to bolster the population. For your best chance of seeing one, hike High Peaks in evening or morning, and look for their distinctive white underbellies.

One of two talus caves in the park, Bear Gulch requires a flash light, flexibility and waterproof shoes — as well as some scheduling flexibility, as the upper and lower passages of the complex close occasionally due to high water or the needs of the resident bat community. (Expect bat-related closures mid-May through mid-July.) Immediately outside the cave is the Bear Gulch reservoir, one of the park’s most photogenic spots.

North Chalone Peak is the park’s highest point, and accessible via the Chalone Peak Trail. It’s nine miles long, and a particularly good option in the spring — when Bear Gulch Cave might be closed — thanks to the plethora of wildflowers along the route. The views from the top, of course, are excellent in any season.

Make a weekend of it by reserving one of Pinnacle’s year-round camping sites — unlike some other California national parks (cough Yosemite cough), it’s not impossible to get near-term availability (at least midweek, or during the quieter season).