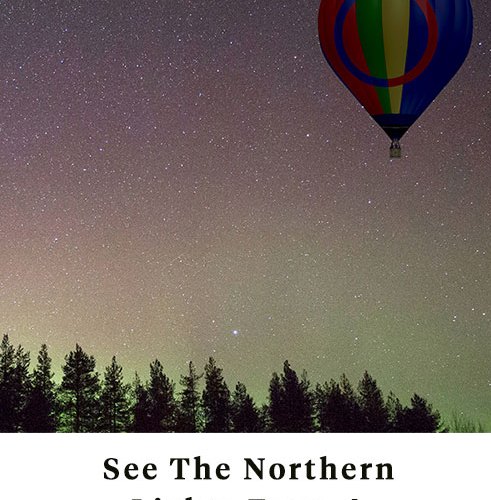 If the Pew Research Center collected data on Americans who’ve witnessed the nighttime light phenomena know as the aurora borealis, their graphs would indubitably show a huge bump in the 2010s, as Icelandic tourism exploded and Scandinavian intrigue took over the globe.

A proverbial ROYGBIV rush followed, as tour operators, cruise ships, and locals with extra beds scrambled to provide bespoke “Northern Lights experiences” for eager visitors. Here at InsideHook we covered all of it, and after a while, blasphemous/bougie as this may sound, the idea of glass cabins under colors dancing in the sky began to sound a little routine.

Lapland, Sweden, though, is about to roll out a concept that’s poised to inject the industry with some creative flair. It’s called Aurora in the Sky, and it’s the world’s first hot-air-balloon aurora hunt.

The project is a joint venture between Jonas Gejke and Fredrik Broman, founders of Aurora Safari Camp, a “ballooning expert” named Andrew Peart (who’s flown hot air balloons over African savannahs for 25 years) and Off the Map Travel, a tour operator that specializes in trips to the region. During a three-day-trip, guests can expect the 40-meters-up flight, quarters in a teepee base camp (which apparently has a sauna) and even a snowmobile adventure, weather permitting. In case your hunt comes up empty, don’t worry. Swedish Lapland is the nation’s wildest, most stunning province, and there will also be opportunities to head up for a view during the day.

Find more info here, and if you’re interested, be sure to reach out sooner rather than later. Spots on the earliest “flights” will fill up quickly.

Subscribe here for our weekly travel newsletter, The Journey