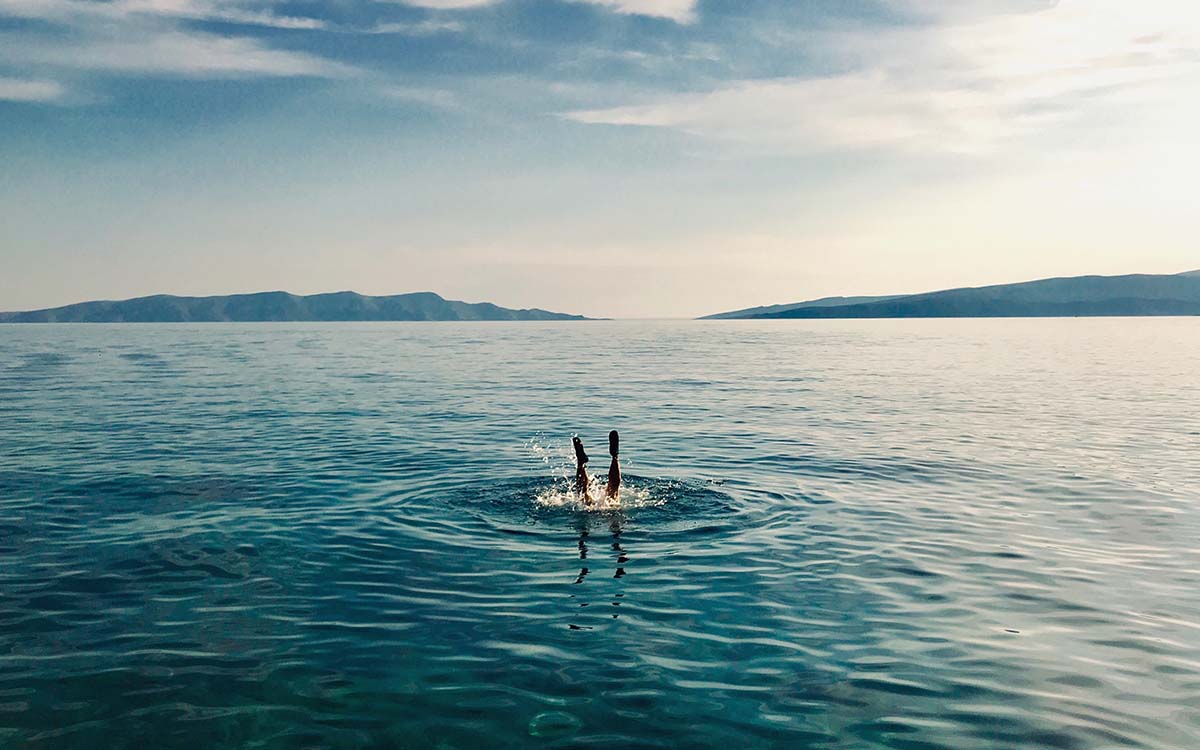 Three summers ago, on the way back from a weekend in Montreal, I stopped with some old college friends in Vermont to jump into Lake Champlain. There’s a park in South Burlington called Red Rocks that features a few hiking trails lined by hemlocks, a pebble-set beach and easy-enough routes down to the boulders that line the water.

We couldn’t have spent more than a couple hours there — we jumped in, waded around and stared at Juniper Island, an islet the state paid just $200 for in the early 19th century — and for much of the ride home, packed into an excessively air-conditioned Jeep, our suits remained damp and uncomfortable. But years later, that slice of afternoon — more an unexpected aside than a premeditated adventure — is what my friends still text about when referencing the Montreal trip.

Such excursions could prove crucial this summer, with uncertainty over how, exactly, Americans will get their swimming fix. The CDC released guidelines for “public pools, hot tubs and water playgrounds” last week, and emphasized that while there is no evidence COVID-19 can be transmitted by pools specifically (chlorine is believed to help kill the virus), the many other physical trappings of a swimming pool — the crowds, the railings, ladders and slides, the tight-quartered locker rooms, the poolside furniture, the dining pavilion, the shared towels — could complicate any hope of a safe, sustained reopening.

The nation’s current plan to reopen its aquatic venues is a predictably confusing patchwork that varies by state and severity. In New York, swimming pools are tied up with arts, entertainment and sports as part of the vaunted and final “Phase Four” of reopening, which won’t arrive until late summer at the earliest (though Mayor Bill de Blasio has stated that community pools will not open regardless). States like Alabama, Alaska, Arizona and Arkansas, meanwhile, have been operating at 50% for weeks now. Missouri pools are only just reopening, but you wouldn’t be able to tell from a Lake of the Ozarks party over Memorial Day Weekend. In Ohio, pools are officially allowed to begin operating, but many don’t want to. Other states have highly specific mandates: Virginia is allowing outdoor lap swimming only, one-per-lane, and Kentucky has opened “exercise” pools only.

Any pool that manages to nail the CDC’s regulations, though, would be a truly bizarre and unique scene. Pool loungers will need to be set up six feet apart. Kids, accustomed to days spent antagonizing lifeguards, salting curly fries and smacking each other across the head with pool noodles, will now be expected to somehow practice social distance. Everybody will have to wear a mask when not in the pool. Some have even floated the idea of segmented attendance days (your family is allowed to go on Friday, the folks down the street can go on Saturday, etc.). It’s hard to imagine every pool in America taking these stipulations seriously, and impossible to imagine exclusive pool clubs or privately-owned backyard pools attempting to enforce them at all. (If anything, there will soon be more private pools added to America’s supply. As the The New York Times reported last month, some Northeastern glitterati got to work building Gilded Age in-ground pools not long after they fled the city for lockdown.)

In other words, they country isn’t counting on effective re-openings, and neither should you. But you don’t need to spend $75,000 or refresh Home Depot’s aboveground pool page every two days to see when the $300 inflatables are back in stock. This is actually a unique opportunity to embrace a growing trend started by our friends across the pond: “wild swimming,” which was born in the frigid bogs of rural Britain.

Rebecca Mead wrote an expansive piece for The New Yorker this past January — one part guide, one part ode — that details how the activity exploded in the United Kingdom, where half a million are swimming each month, even on the coldest days of the year. Inspired by the aquatic adventures of writers like Roger Deakin and Kate Rew, the British are increasingly seeking out swims in the U.K.’s 40,000-plus lakes, from lochs in Scotland’s volcanic national parks to the ponds at London’s Hampstead Heath. The procedure is simple and invigorating: jump in, kick around, swim if you wish. That such a foundational, primitive instinct — see water, jump into water — has become an actual movement is buoyed by the many physical and mental health benefits the British have come to associate with it.

Wild swimming has thrived in spite of the U.K.’s famously dour weather, and perhaps even because of it. British water temperatures hang around the low 50s, but the nation’s swimmers — competitively or casually — have embraced the chilliness, and reported benefits associated with cold-water therapy. Research has long suggested (and recently been popularized, most notably by Dutch extreme athlete Wim Hof) that immersion into frigid water catalyzes post-workout recovery, staves off injury, lowers blood pressure, increases metabolic rate and stimulates the immune system. The British have reported mental health benefits, too: consistent dips have been associated with the release of neurotransmitters like dopamine, adrenaline, norepinephrine and serotonin, all of which have anti-depressive effects.

For many Americans this summer, an afternoon spent wild swimming could prove a well-deserved distraction, if not a godsend. When executed thoughtfully, jumping in a body of water somewhere unfamiliar is an expert social-distancing activity, and can even feel transformative; it’s the reason Lake Champlain still gets top billing in the group chat with my friends, as opposed to our run-ins with poutine, a jazz concert or a grunge bar fit for Parts Unknown. Our swim felt completely separate from the rest of the trip, and a solar system away from the long hours I routinely spend in front of a computer in New York City. Recent surveys have suggested that work-from-home burnout is at an all-time high, and a retreat into nature will provide your brain and body with vastly different stimuli, readily subverting any notions you might be having that this summer will be a lost cause.

Sites like RV Share have diligently catalogued (and updated, in real time), the reopening status of state and National Parks throughout the country, which will give you a better idea of where exactly you can pull off a dip. At this point, every single state has now upgraded its state parks consortium to “open” or “limited” for hiking. Limited here means that larger, more popular state parks may be closed, or be observing caps on parking spaces. As for National Parks, the majority are only partially open, with certain roads or sections of the park still closed down. (Some notables, like Glacier, Sequoia-Kings Canyon and Yosemite, are yet to open at all.)

And even if your favorite public park is open, you’ll have to be flexible to unannounced gate closures, potential crowding in certain areas (viral transmission is hindered, but by no means prevented by the great outdoors) and the dangers of traveling through a wild area with a reduced maintenance staff: trash cans may be overflowing, which could attract unwanted visitors, and certain trails may not be as orderly as you’re used to. Last year, I chatted with a guide on Yosemite’s Mist Trail who explained that California Conservation Corps normally spend all summer setting and replacing stones.

But while things could get complicated, the extra legwork will be worth it: many of us aren’t just missing pools, but also the behavioral activation benefits of planning a trip. A wild swimming excursion gives you an opportunity to check both those needs off your list.

Wherever you do end up splashing around, whether in a local stream or a glacial lake, make sure it belongs to the public domain and is open for recreation. And when you’re there, keep in mind The Outdoor Swimmer’s Code, a set of rules outlined by the United Kingdom’s Outdoor Swimming Society. There are quite a number, but a choice few to keep in mind: keep a good distance from anglers, be considerate of nesting birds, own up to your swimming ability, understand that there aren’t any lifeguards on duty, honor the buddy system, don’t disturb waterweed and gravel beds, forego single-use plastics and most importantly, keep your pants on. If anything, you might want to bring extra gear — in her piece for The New Yorker, Mead reports keeping a pair of neoprene booties handy, for when the water is especially cold. She also recommends taking note of the water’s temperature and convert it to Celsius — that’s roughly the number of minutes you should feel comfortable in frigid water.

It should be said, too, that wild swimming might be best enjoyed without an assist from social media. A Welsh writer wrote a piece for The Guardian earlier this year entitled “‘Wild swimming’? We used to just call it swimming,” which details how comical and privileged the term sounds to the community in her native Snowdonia (a mountainous region that comprises an expansive national park in northwestern Wales) and to others who live astride “quarry holes, waterfalls and lagoons.” Her concern is that the phrase highlights the once-in-a-while backcountry escapades of urbanites while marginalizing those who interact with natural areas every single day. It’s a legitimate argument, especially in a pandemic, when flight from cities has become a flashpoint issue and can put strain on towns hours away. To that end, maybe save the photos for yourself, or be mindful (if you travel far) of focusing on the swim for now.

And if you’re still in need of motivation, just remember: We’re living through an exhausting, frustrating age. Rarely does that reach-for-the-phone ritual each morning yield news exciting, or joyful, or rectifying. But miles away, in your mind, if not literally down the road, there is probably a pond, river or Lake Champlain where you can stop for a little while and swim, splash around, or just tread water. It might not look, feel or smell like anything you’re used to, but then, neither will anything this summer.