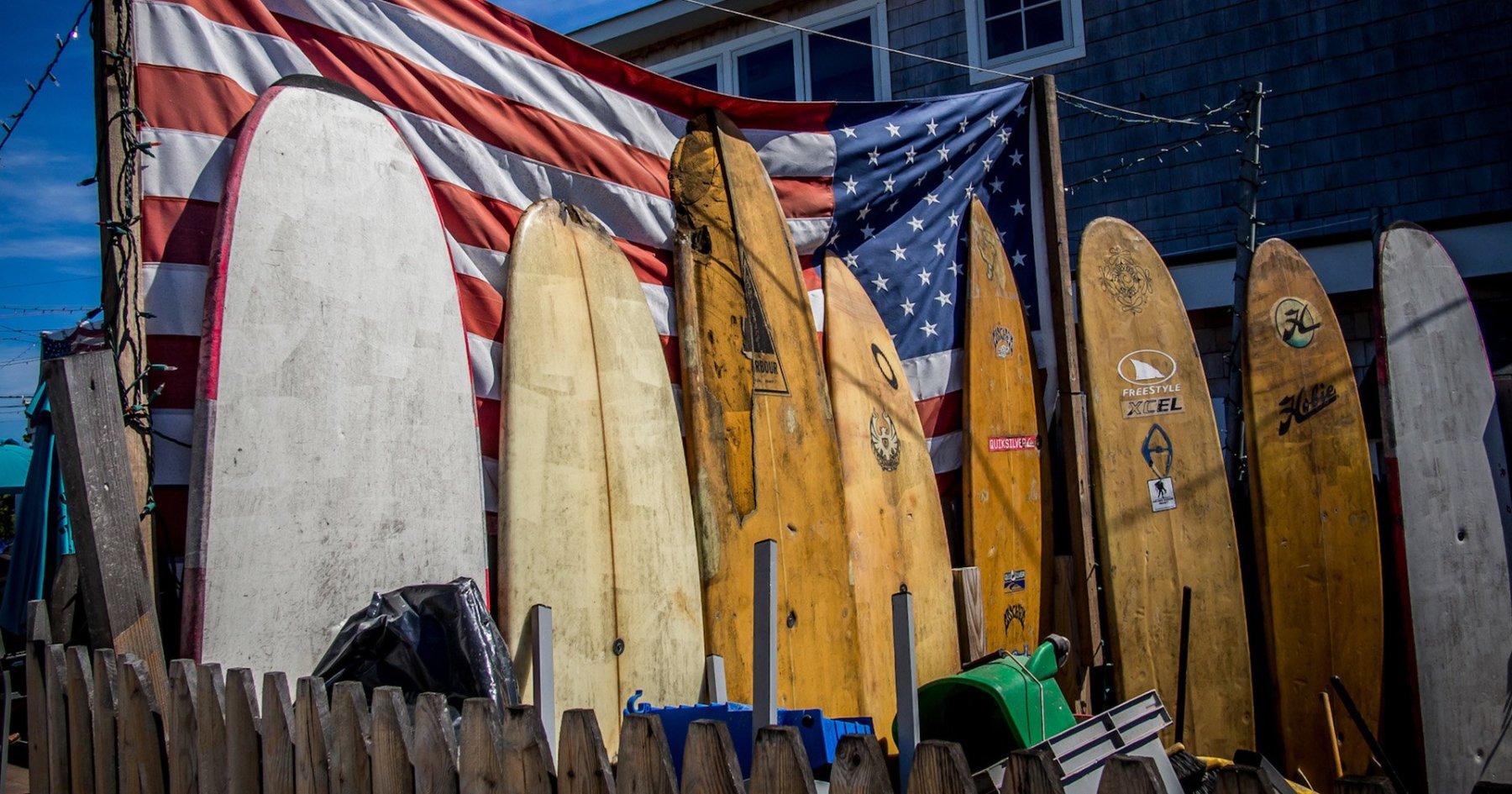 New York really does pack 40 theaters into five square blocks. Austin smokes a helluva brisket. And you can’t walk a mile in Denver without passing a weed shop.

But following the masses on your next long weekend isn’t just narrow-minded: it also tends to be more costly and crowded. It’s like waiting six minutes to spend $10 on an airport Heineken: they’ve got you right where they want you, and charge accordingly.

So in the spirit of discovery, we’d like to propose 15 alternative American destinations, aka cities that serve up a particular amenity (say, live music) just as well as their more ballyhooed counterparts. Think touring wine country in Oregon. Surfing on Long Island. Or swigging from an open container in a Southern city that isn’t New Orleans.

And we’ve added a global alternative for each, too, just in case you’ve got cabin fever. 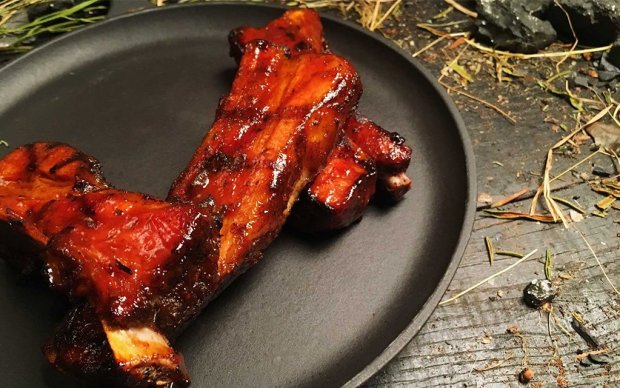 BBQ
Instead of Austin, TX, head to … San Luis Obispo, CA
SLO is a sleepy Cali coastline tri-tip grilling haven (triangular pieces of beef cut from the sirloin, grilled on the edges to a dark crust) and a welcome change of pace from the Southern BBQ scene … Head to Old San Luis BBQ Company for tri-tip sliders … Run it back with a tri-tip sandwich at Firestone Grill (or grab an ABC burger) … If you’re still hungry try Rib Line or Mo’s Smokehouse … Oh and the views shouldn’t be too bad, either.
Or book a flight to … Argentina
Image from Rib Line 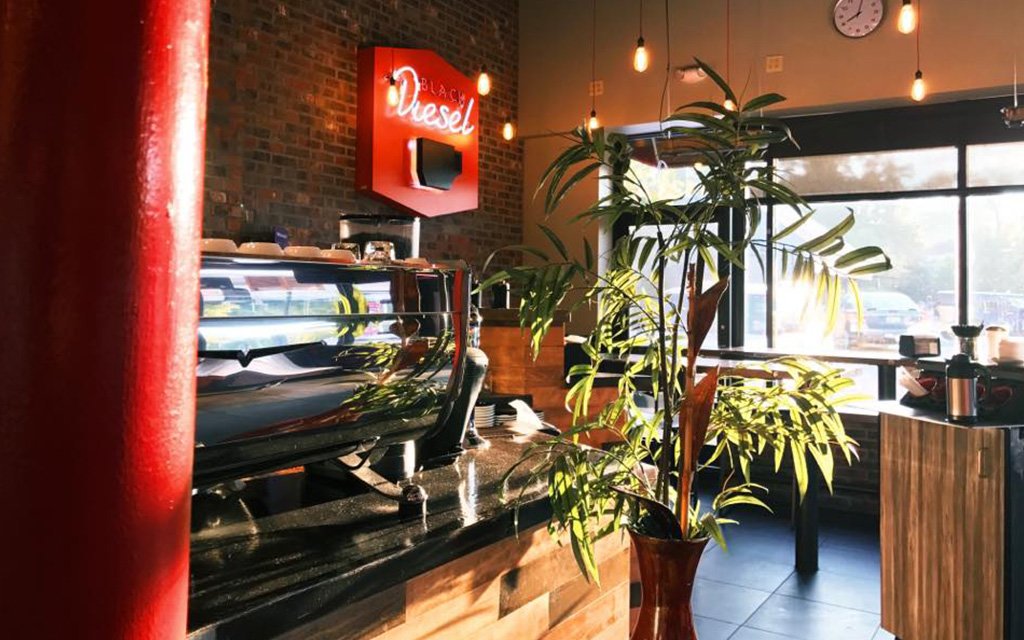 Coffee Culture
Instead of Seattle, WA, head to … Ann Arbor, MI
Someone ring up Jerry Seinfeld: college towns are java wonderlands … Seek out Black Eye Diesel Coffee for beans from Michigan roasters … Literati Coffee for a poetry reading alongside your espresso … Comet Coffee for some epic pour-over … Or Shinola Cafe, a basement hideaway under the leather and watchmakers’ local outpost … And you’ll stay at the Graduate Hotel, home of — you guessed it — Poindexter Coffee.
Or book a flight to … Ethiopia
Image from Black Eye Diesel Coffee 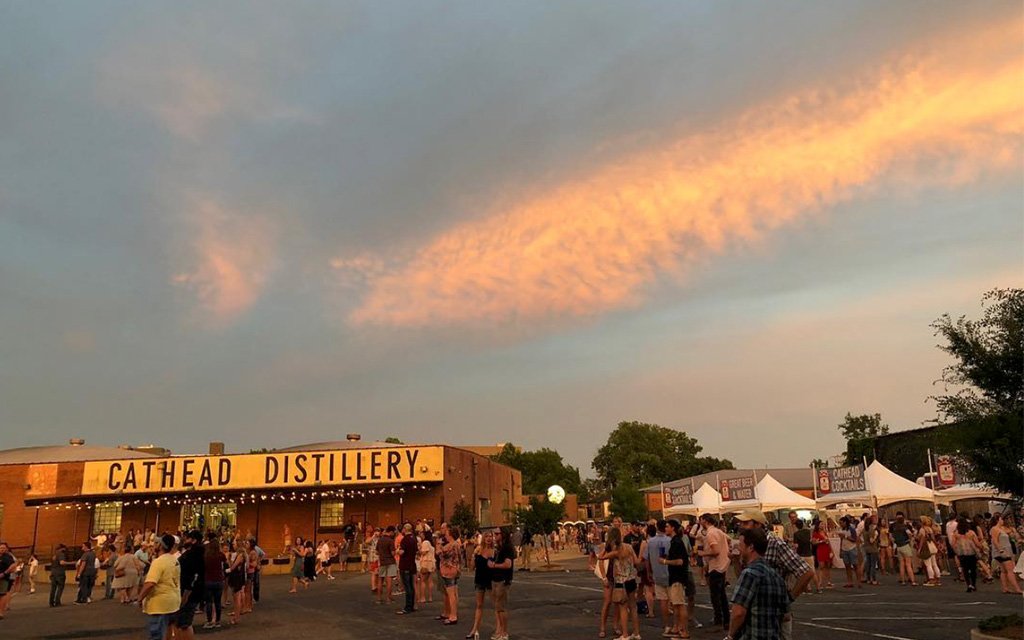 Live Music
Instead of Nashville, TN, head to … Jackson, MS
Reintroducing The City of Soul … First, head to Duling Hall, a stained-glass elementary school turned concert venue, for country, blues and jazz … Hungry? Try Underground 119 for bites and blues in a basement setting … More of a festival guy? Cathead Distillery hosts one every summer … And there’s also Spacecamp for some alternative rock tunage.
Or book a flight to … Australia
Image from Cathead Distillery 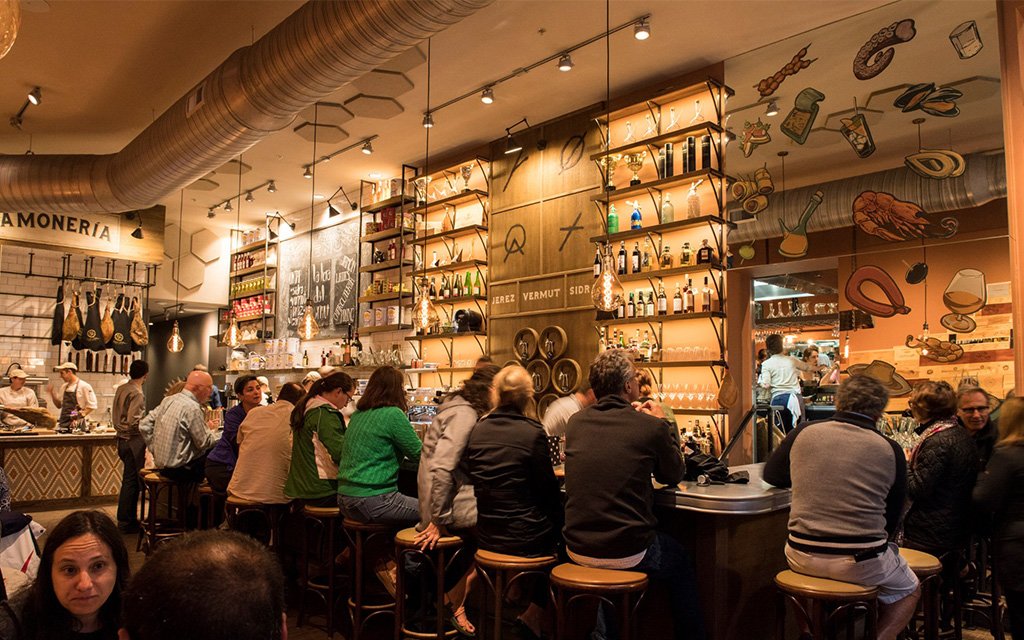 Gastronomy
Instead of Portland, OR, head to … Asheville, NC
Welcome to the Southern stopover everyone should be talking about … Sovereign Remedies serves up dishes from local farmers/foragers, from jalapeno pig ears to shrimp sausage … Cúrate’s an old bus depot that now churns out mouthwatering Spanish tapas … Biscuit Head’s got you covered on, uh, biscuits (and fried chicken) … And try Wicked Weed, Asheville Brewing or Hi-Wire Brewing for craft beer.
Or book a flight to … Denmark
Image from Cúrate 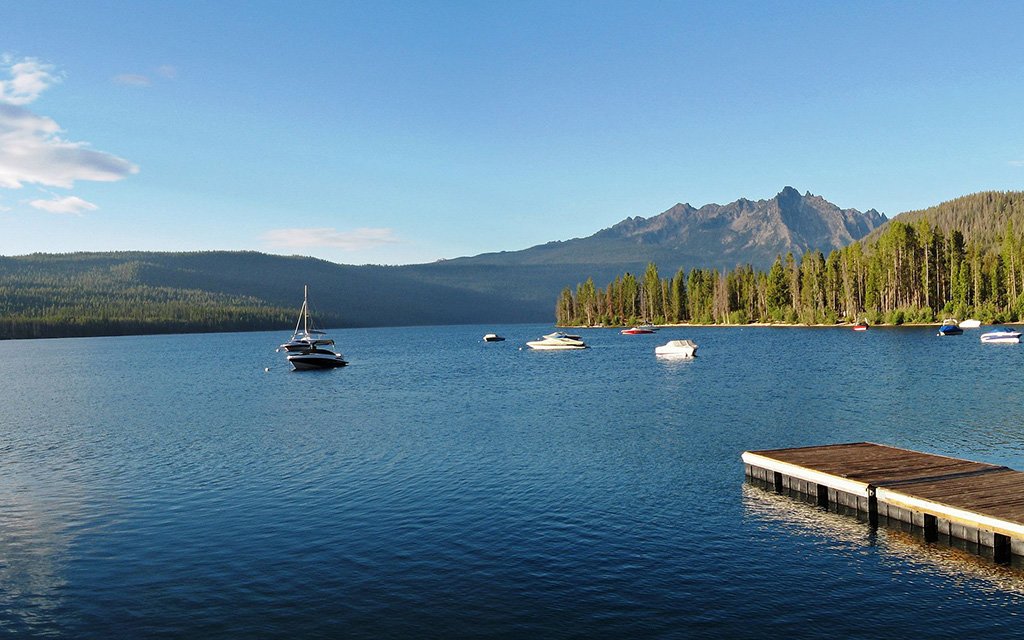 Lake Life
Instead of Minnesota, head to … Idaho
Minnesota’s the Land of 10,000 Lakes and New York’s got George and Placid, but believe it or not, there’s plenty of freshwater fun to be had out in Idaho … Book a summer cabin at either Hill’s Resort or Elkins in Priest Lake … Then visit Lake Pend Oreille, the state’s largest and the nation’s fifth deepest (100+ miles of its shoreline is rugged mountains) … Spend a couple nights at Redfish Lake, situated at the base of the Sawtooth National Rec Area … And don’t forget C.J. Strike Resevoir for watersports galore.
Or book a flight to … Uganda
Image from Wikimedia Commons 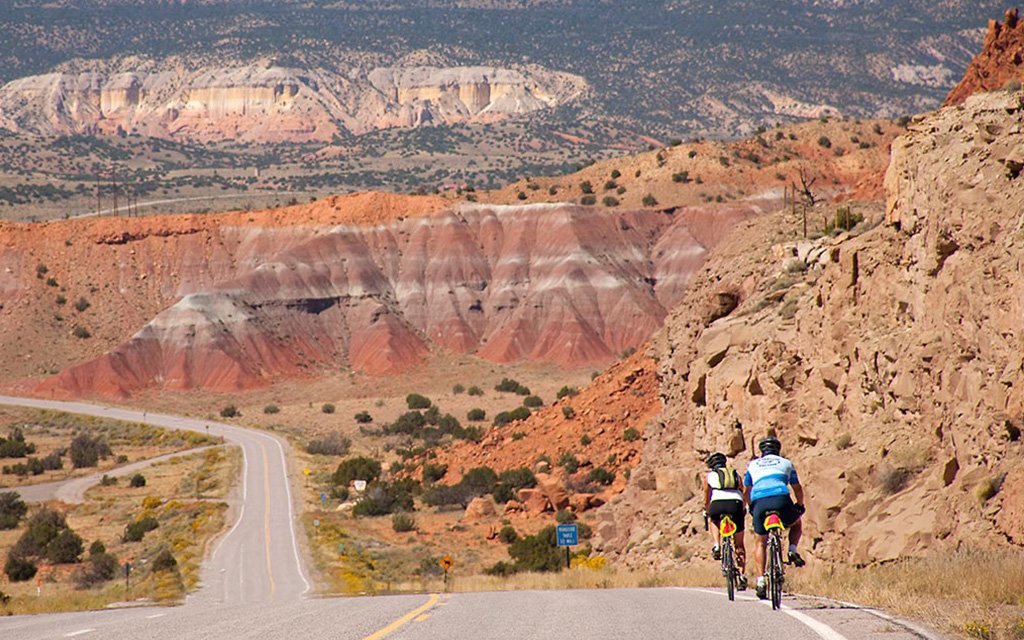 Outdoor Adventure
Instead of Boulder, CO, head to … Santa Fe, NM
Fuel up with a world-renowned breakfast burrito and get going. Plan a six-mile out-and-back hike to the summit of Atalaya Mountain … Snap some shots of volcanic cinder cones along the Petroglyph National Monument … Bike through Carson National Forest on the South Boundary Trail … Hitch a cycling tour with Taos Bike Tours while you’re at it … And once the temp drops, hit up Ski Santa Fe for some New Mexican pow pow.
Or book a flight to … Chile
Image from Taos Bike Tours 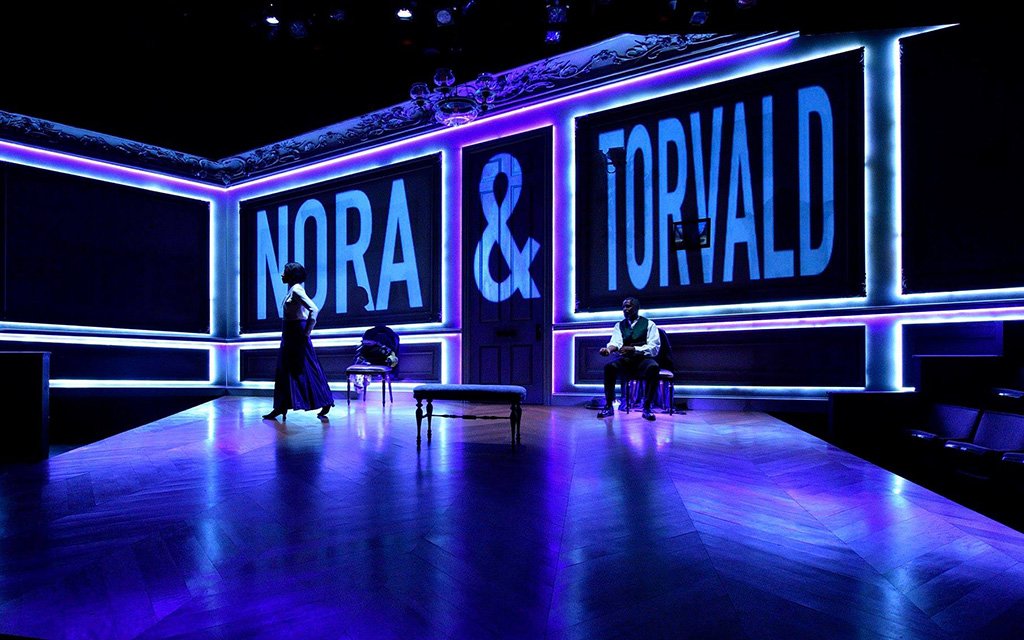 The Performing Arts
Instead of New York, NY, head to … Louisville, KY
Louisville offers more than just baseball bats … Start at the Actors Theatre, which has been around for 55 years and puts on 30 shows a year, while also hosting an ace apprentice program … The Humana Festival of American Plays is approaching its 43rd year in operation (three previous plays have won the Pulitzer Prize) … Other notables: Louisville Theater for Broadway shows and Kentucky Center for the Arts for plays, comedy specials and concerts.
Or book a flight to … Scotland
Image from Actors Theatre 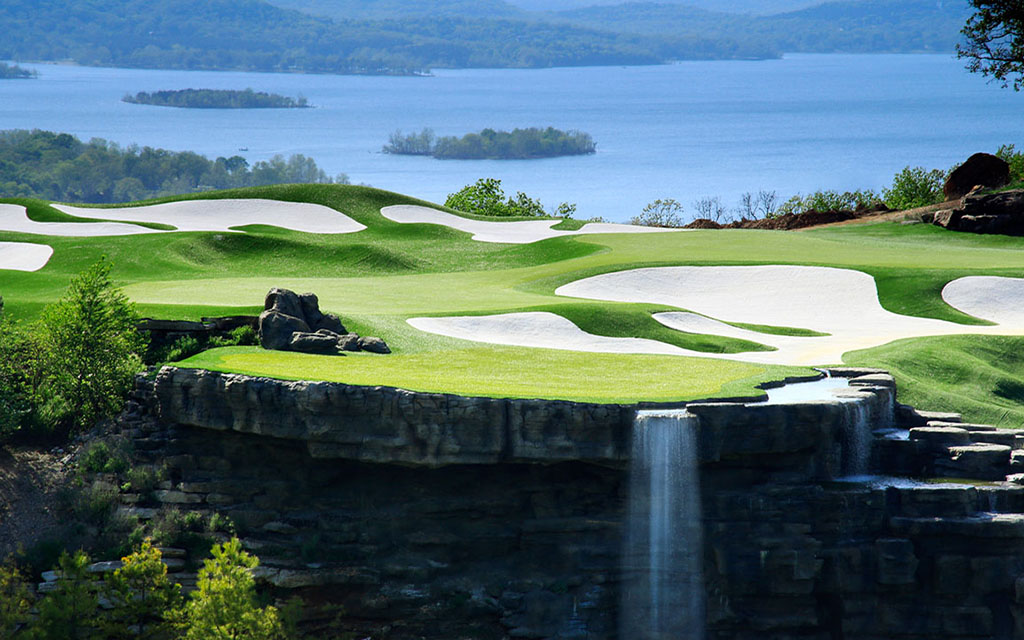 R&R
Instead of Scottsdale, AZ head to … The Ozarks, AR/MO
It’s hard to relax when Arizona wants half of your bonus. Instead, try the Ozarks, starting with Beckham Creek Cave, a private lodge built into a mountainside with 260 acres of wilderness to explore … Then stay the weekend at Big Cedar Lodge in Branson, MO, soon to boast courses designed by Gary Player, Jack Nicklaus and Tiger Woods … You can also mix meditations and massages at Spa Shiki or Old Kinderhook.
Or book a flight to … Finland
Image from Big Cedar Lodge 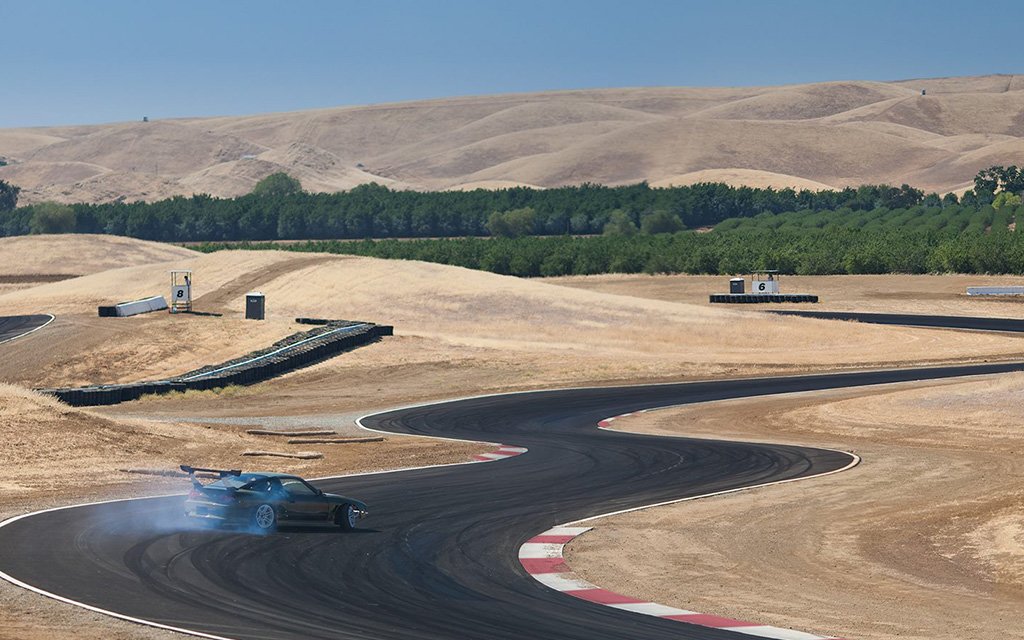 Race-Car Driving
Instead of Indianapolis, IN head to … Sacramento Valley, CA
No more tailgates! Time to get behind the wheel yourself … Check out Thunderhill Raceway Park in Glenn County, California. It can be rented out for racing, drifting, go-karting, driving schools, commercials, weddings, you name it … The city also hosts a pretty cool lights festival when there aren’t cars on the road.
Or book a flight to … Austria
Image from Thunderhill Raceway Park 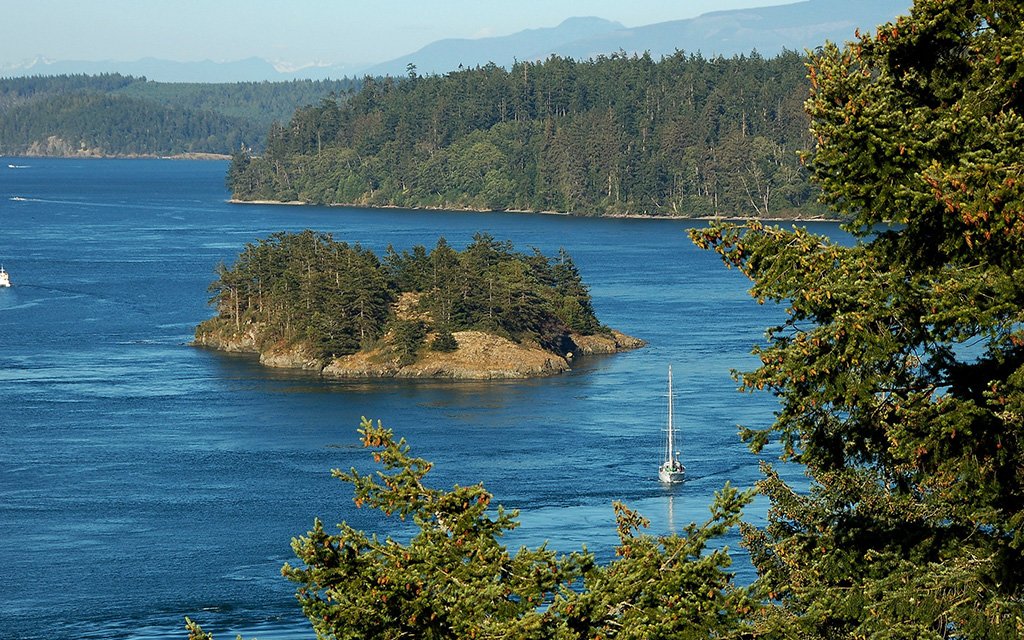 Salmon Fishing
Instead of Alaska, head to … Washington
It’s tough to replicate Alaska’s legendary salmon fishing, but Washington gives the Lower 48 a fighting chance … Head to Neah Bay in July for Chinook salmon up to 50-lbs, and to Skagit River in September (on odd years) to catch pink salmon … Washington newbs should stay at the Sun Mountain Lodge to enjoy an array of outdoor fun.
Or book a flight to … Japan
Image from Wikimedia Commons 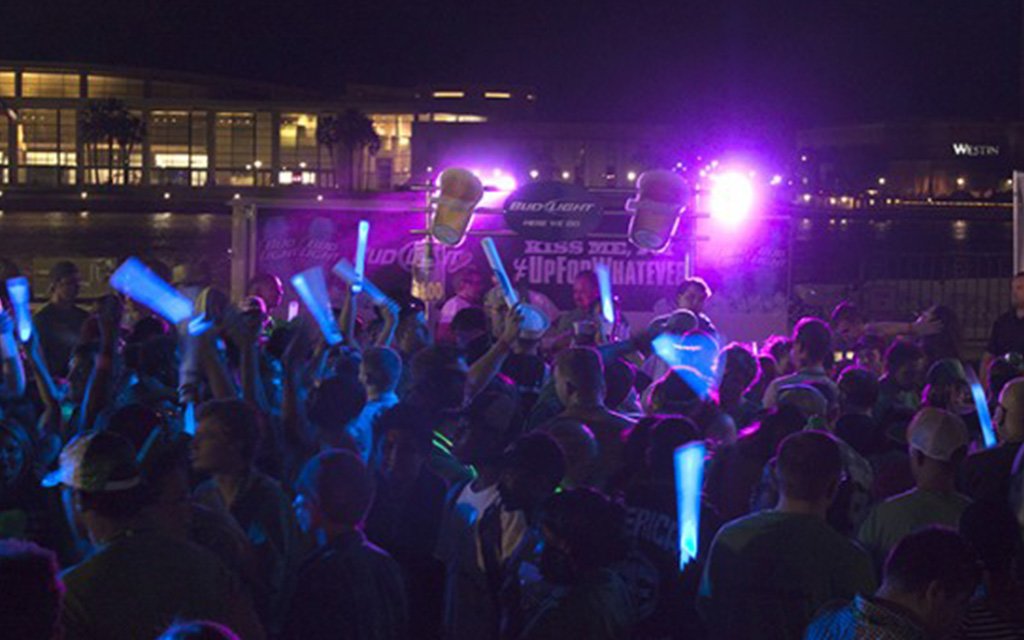 Street Parties
Instead of New Orleans, head to … Savannah, GA
One of the few places in this puritanical country with relaxed open-container laws — so long as you remain in the Historic District and keep your drink in a plastic 16-ounce cup, you’re good to go … Head to the city for one of its many Irish celebrations (Irish Festival, Greening of the Fountain, St. Pat’s) … Or, for traditional indoor drinking, visit dive bar The Rail Pub or Treylor Park.
Or book a flight to … Croatia
Image from Savannah.com 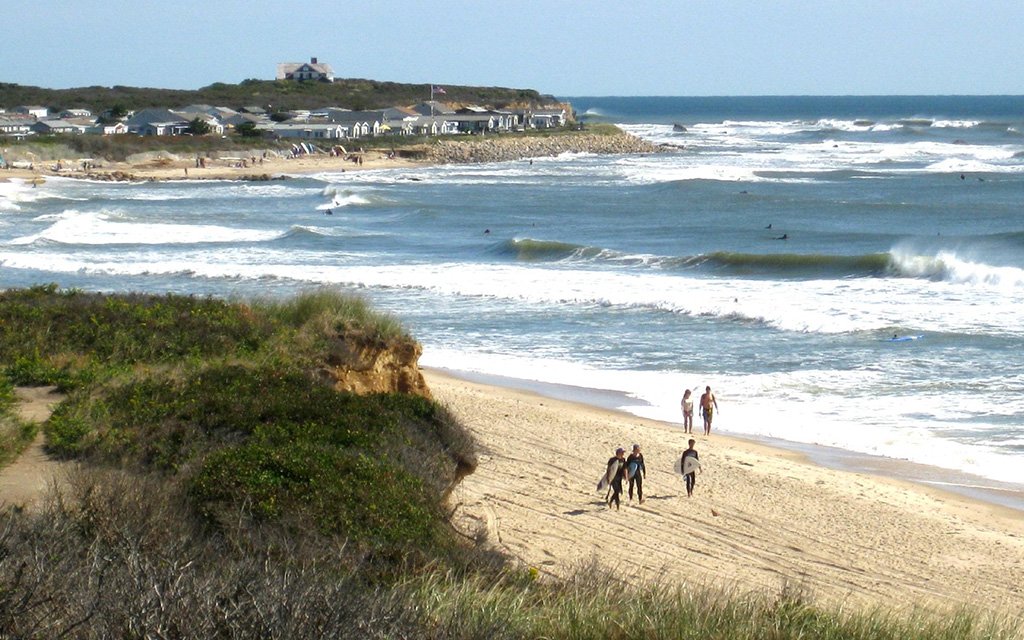 Surfing, Brah
Instead of Southern California, head to … Montauk, NY
Welcome to The End, perfect for all manner of surfer, from barneys to bros … Head to either Ditch Plains Beach for some reliable waves or to Terrace to avoid the crowds … Stay at The Crow’s Nest for laidback digs and/or stand-up paddleboarding on Lake Montauk … Hawk a longboard or beach cruiser into town and pick up some grub at The Hideaway (Mexican, BBQ, seafood) or Herb’s Market (fried chicken).
Or book a flight to … South Africa
Image from Wikimedia Commons 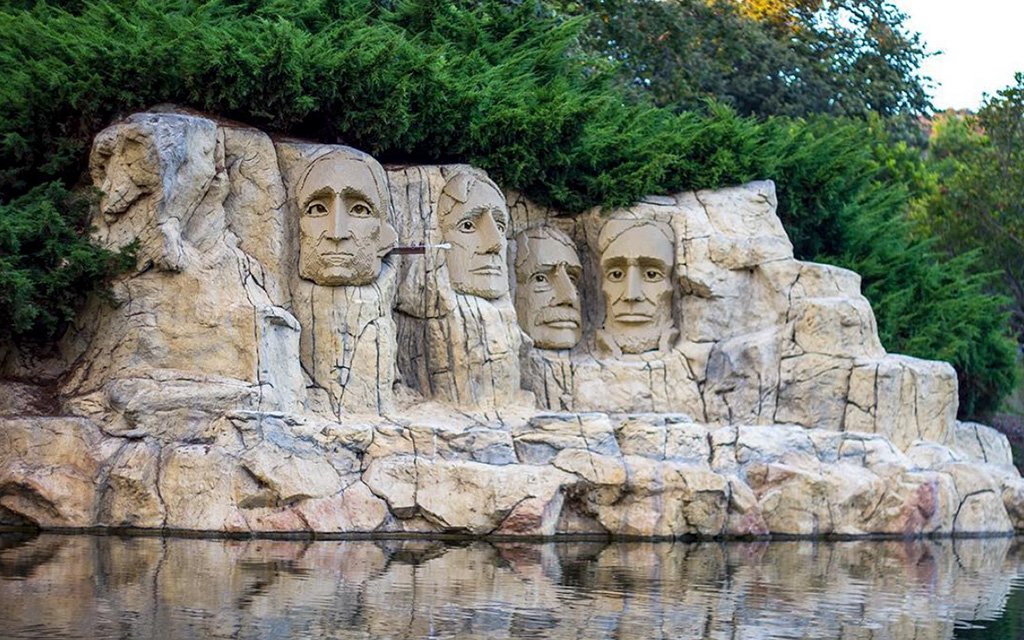 Theme Parks
Instead of Orlando, FL, head to … Carlsbad, CA
You can do better than the Mouse’s kingdom, people! … Carlsbad is home to LEGOLAND (expect dinosaurs, cities, presidents all made of the little blocks), which also has a waterpark … If you haven’t sworn off aquariums, Sea Life is also an option … Once the kids are sick of the park, drag ‘em to Carlsbad Ranch and its yellow-and-red flower fields … And North Ponto Beach is sure to please.
Or book a flight to … Hong Kong
Image from LEGOLAND 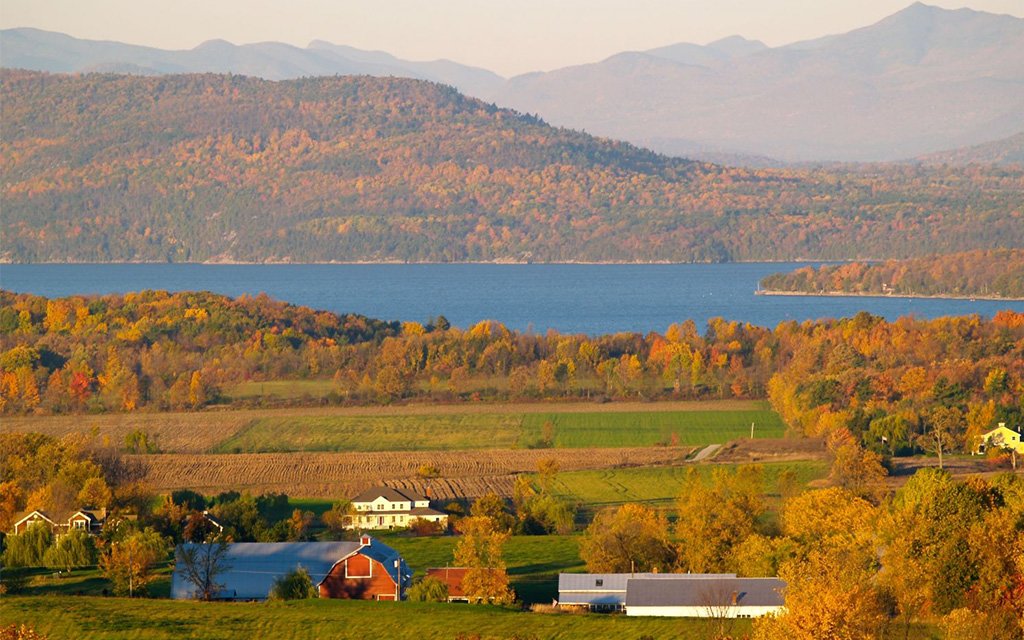 Weed Haven
Instead of Denver, CO, head to … Burlington, VT
Rejoice, Vermont has joined the list of legal states (so long as you avoid smoking on Lake Champlain, in public parks, etc.) … Book a stay at the Mt. Philo Inn, a “Bud and Breakfast” just 30 minutes outside of downtown Burlington … Visit the Champlain Valley Dispensary for provisions … Spend an afternoon biking the Burlington Path … Meet your appetite with a pastry or two from August First.
Or book a flight to … Costa Rica
Image from Wikimedia Commons 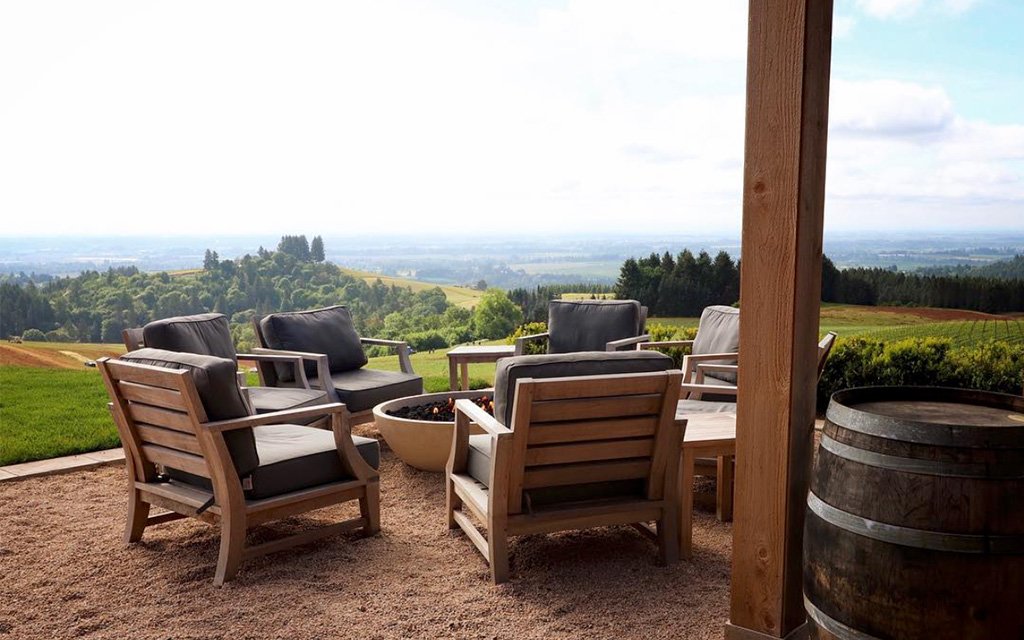 Wine Country
Instead of Napa Valley, CA head to … Willamette Valley, OR
A 150-mile valley packed with more than 500 wineries, Willamette is a slice of Pinot noir paradise … Spend a few nights at the Black Walnut Inn & Vineyard or the equally well-appointed Atticus Hotel … Visit three to four wineries on an exclusive tour with Backcountry Wine Tours … Check out the preposterous waterfall in Silver Falls State Park to extend the whole “pouring” theme.
Or book a flight to … Uruguay
Image from Black Walnut Inn & Vineyard