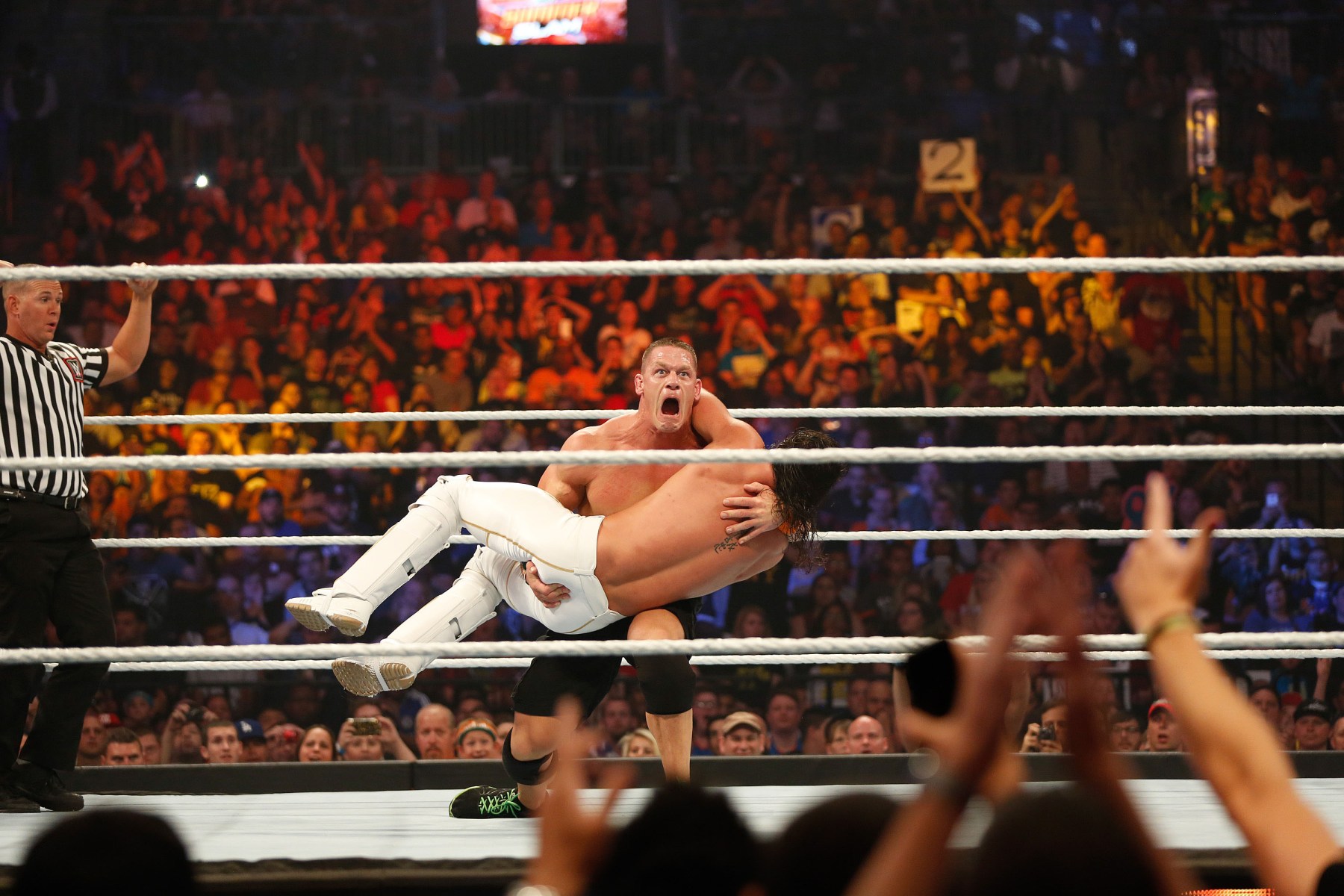 As the coronavirus pandemic swept through the United States, professional wrestling has done its best to adjust to the new climate. To that end, WWE’s annual marquee show, WrestleMania 36, will go on in with a unique, never-before-seen format. While the Showcase of the Immortals typically takes place in sold-out football stadiums, this year, it will take place at the company’s Performance Center in Orlando, with no fans.

To add to the bizarre situation, the matches will be pre-recorded, with some taking place in unique environments. While it’s not ideal for anyone involved, WWE is often at its best when its back is against the wall, and the WrestleMania card this year has the potential for some incredible showdowns. With 16 matches spread out over Saturday and Sunday night on the WWE Network, the biggest wrestling show of the year has a lot of potential, so we narrowed it down to the five matches that should be the best spectacles, whether you’re a hardcore fan or someone just dipping their toes into professional wrestling.

We’ll start with the biggest legend and character in WrestleMania history. The Undertaker has defined the biggest show of the year for decades, with his undefeated Streak deeming his match one of the biggest each year regardless of his opponent or place on the card. That Streak was broken by Brock Lesnar in 2014, and Taker’s matches since have ranged from “acceptable” to “please retire, for the love of all that is unholy.” However, the weirdness of this year’s WrestleMania, combined with his opponent, might just mean we get one last classic from the Deadman.

AJ Styles is one of the best wrestlers of all time, full stop. Since joining WWE in 2016 after years in the indies and japan, Styles has put on a variety of high-quality matches across all segments of the company, and now he gets a shot at the final boss of WrestleMania in what is being called a “Boneyard Match.”

What does that mean? Absolutely no idea! The mystery surrounding the match is part of the draw, but really, the fact that it’s bound to be a hyper-produced match should allow for covering the Undertaker’s many weaknesses at his advanced age. While Taker was a quality wrestler in his time, he’s now more a character than a performer, so expect some spooky zombie magic to take center stage.

Since returning to WWE in 2019 after some time off, Wyatt has been dealing with a split personality. In promos, he’s the aforementioned Mr. Rogers but with a lunatic tilt; there are puppets who murder each other, among many other insane touches. However, in matches, he lets The Fiend take over, a brutal monster who wears a mask not unlike those favored by Slipknot.

Cena and Wyatt have had some theatrical promos during the current run of Performance Center SmackDown episodes, and their match should incorporate disturbing mind games and a lot of violence. It’s always fun to see one of WWE’s main stars thrown into something they’re not familiar with, so seeing Cena deal with the Firefly Funhouse should be worth the price of admission, figuratively speaking, all on its own.

The single best moment of WWE in 2020 was the return of Edge, who made his surprise re-debut in the ring at the Royal Rumble to enormous cheers. Seriously, watch this return, and focus both on the look on his face after nine years away due to serious neck injuries as well as the reaction he gets from the fans at Minute Maid Park in Houston:

Part of the fun of his return was seeing the Rated R Superstar team up with Randy Orton, his former partner in Rated RKO, as well as seeing Edge dump him unceremoniously from the ring. That led to the best story leading up to WrestleMania, which saw Orton try to retire Edge once again by smashing his head between two chairs. Edge’s real-life wife and former WWE wrestler Beth Phoenix also got involved, catching Orton’s RKO finisher for her troubles and spurning Edge to challenge the Viper to a Last Man Standing match, WWE’s most violent “regular” match; essentially, everything goes and the only way to win is to incapacitate your opponent so they can’t answer a 10-count, similar to boxing.

These two should take advantage of the lack of fans and unique setting of the Performance Center. It’s likely that they will fight all over the building and with a variety of weapons, making it a match befitting such a blood feud. This one might not be for the faint of heart, but for those who check it out, it will be a great example of how WWE can pay off its best stories with violent climaxes.

Though there are four separate women’s matches over the two nights of WrestleMania, the one focused on WWE’s third brand should be the best. Rhea Ripley has held the NXT Women’s Championship — the top title for women in the company’s former developmental brand — since December, and it’s easy to see why. She’s a great wrestler, with a unique look, and at only 23 years of age, she has more potential than perhaps anyone in the division. She’ll have to face wrestling royalty at WrestleMania to keep her title, however.

Charlotte Flair is the daughter of the Nature Boy Ric Flair, and while she’s not at the level of her father (who is?), she’s a megastar in her own right. Charlotte bucked tradition after winning the women’s Royal Rumble match in January, bypassing the Raw and SmackDown women’s titles in order to go after the NXT version, of which she was the second champion back in 2014. The story has been simple — Charlotte wants to reclaim the title that made her into a star — but simple works when you’ve got two great performers. There shouldn’t be any gimmicks like the above matches, with these two instead focusing on delivering a show-stealing performance.

Last but certainly not least, we’ve got what promises to be the best pure wrestling match on the entire card. If you ever wanted to see high-quality wrestling performed on the biggest stage possible, look no further than the Intercontinental Championship match between the incumbent, Sami Zayn, and the challenger, Daniel Bryan. These are two of the best workers in the entire company, wrestling over what has traditionally been known as the “workers’ belt.”

That Daniel Bryan is even wrestling is a marvel of perseverance and modern science. The Yes Man retired from wrestling in 2016 due to concussions and neck injuries, but after two years of rehab, he was cleared to return in 2018. Since then, he’s held a variety of titles, including the WWE Championship, which he defended in the best match at last year’s WrestleMania against Kofi Kingston. Now he’s doing excellent work in the mid-card, and will be challenging for Zayn’s title, a title that he had to relinquish due to injuries in 2015.

On the other side of the ring, Zayn has been a revelation ever since turning heel and aligning himself with Shinsuke Nakamura and Cesaro as The Artist Collective. The trio feel underappreciated despite their considerable wrestling skills, though Zayn won the Intercontinental Championship at February’s Elimination Chamber in a 3-on-1 handicap match against the monster Braun Strowman. Since then, they’ve bullied Bryan and his former enemy-turned-friend Drew Gulak. While there might be some shenanigans with the three wrestlers involved on the outside of this match, the two inside the ring are capable of wrestling gold, and their styles — Bryan is a submission specialist who lives and breathes for putting his opponents in painful holds, while Zayn is more of a hyperactive puppy in the ring, bouncing around from move to move — should mesh perfectly well to put on the closest thing this WrestleMania has to an all-time classic.