What to Watch: “Brexit” and “Black Monday” Retell Major Events 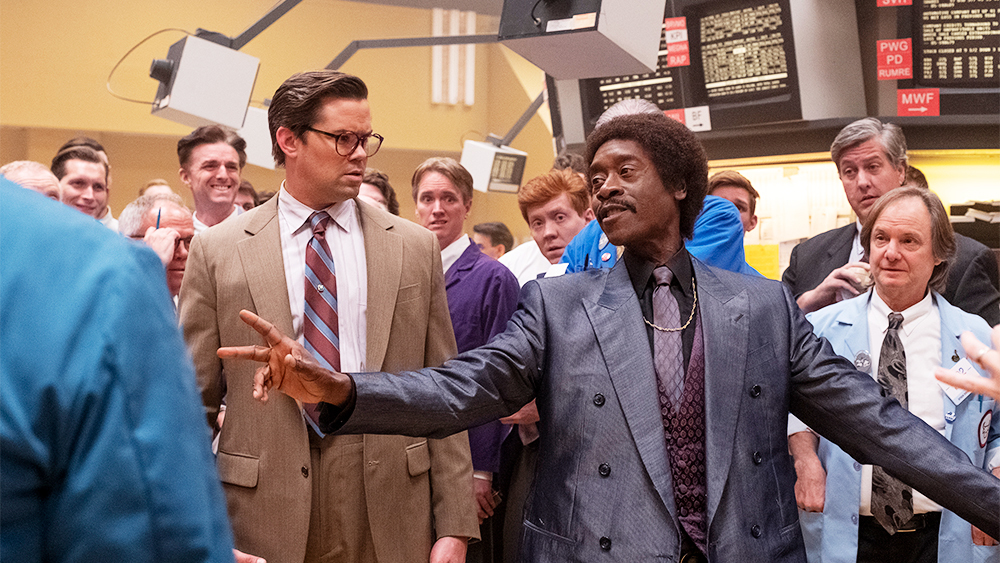 Welcome to What to Watch, a series where we tell you the best shows, movies and series out right now, both on networks and streaming services. And sometimes we lampoon the not-so-good shows these services want us to watch.

Few shows lean so heavily into satire that they feel more like a realistically-animated cartoon than live-action sitcom. Corporate is such a show about workplace life taken to extreme hyperbole. Jake Weisman and Matt Ingebretson star as junior execs (nihilist and optimist, respectively) at the nefarious mega-conglomerate Hampton DeVille that plots a media takeover in season 2. Twitter’s favorite comedian Aparna Nancherla, Lance Reddick, Anne Dudek, and more series regulars round out the all-star cast. Season two expands beyond the cubicle maze to the more acute struggles of whiny old millennials — and if I had to guess those might include ineffective open office plans, social media disillusion, and everyone’s new favorite excuse “burnout.” Episodes air Tuesday at 10:30 PM EST, and you can catch up on the first episode/all of season one on Comedy Central.

In the past few weeks I’ve encountered this show advertised everywhere. Plastered on subway walls, droned about before my morning podcast, and as Hulu’s new favorite ad to play every, single commercial break. So now you too have to become aware of a show best described as Vampire Diaries but with aliens. If you’re older you may remember the original 80’s show starring Katherine Heigl and Shiri Appleby. The CW series ages the cast from high schoolers to 20-somethings, and adds current immigration politics to make obvious metaphors to “illegal aliens.”  The actual aliens in Roswell have been hiding out as regular people since their ship crashed on Earth. The show starts with their high school friend Liz Ortecho returning to visit her undocumented father. A love triangle forms among Liz, her ex-boyfriend who now works for ICE, and one of the three aliens. The CW never fails to deliver melodramatic, nonsensical teen soap operas.

While fans of the original aren’t impressed by the reboot, new Rosewell does an applaudable job of tackling current, more serious topics with reasonable gravitas. This is no X-Files, but a standout among the CW’s slate of head-scratching teen dramas.

Deadly Class is an adaptation of the monthly comic series of the same name, and if you like the graphic novels you’ll enjoy this show. Otherwise, reviews criticize the lack of necessary changes from page to screen. The show follows a young class of assassins-in-training at a secret American school. What was once a program to help underprivileged kids learn how to protect themselves has turned into an elite prep academy for the famous children of gang leaders and criminal royalty. There’s a lot of violence and gun imagery for a high school, as some have noted, but this is based on a comic series after all. One critic calls it “Hogwarts for hitmen.” It certainly tries to be as dark as the later Harry Potter films, but its messaging is unfortunately a bit cheesier.

What’s most interesting to me is star Lana Condor, who blew up opposite of Noah Centineo in Netflix’s smash hit To All the Boys I Loved Before. Perhaps Condor wanted to show she can take on darker roles, but I’ve yet to figure out what her agent was thinking when nabbing this show. Knowing the source material I thought this would be an interesting venture for SyFy, but I’m left not knowing who this show is for. The only target audience I can conjure for this show is the slim number of people who would have rather watched Twilight as a DC movie (distinctly not Marvel).

We were blessed to get two docs on Fyre Fest this week (along with its own scandals), but an arguably larger scam might be HBO’s new film retelling of Brexit. Why is it a scam? Maybe because Brexit is still happening, and many Brits want an official investigation into the vote—not a Hollywood drama. Regardless, Benedict Cumberbatch plays Dominic Cummings, the man behind the winning Leave campaign. If, like me, you never fully understood what all the hullabaloo was about in the first place, HBO’s new drama reveals all of the characters, motivations, and strategies behind the Leave and Remain campaigns.

The name brings to mind prestige television like The Sopranos or Succession, but the images look like a cutesy nature doc. Dynasties is neither. Instead the show follows animals from five different species all in danger of going extinct. After the virtual extinction of the white rhino and blue macaw in 2018, this series is Sir David Attenborough’s most urgent documentary yet.

I’ve long been annoyed with the fascination of making Wall Street’s corrupt seem fashionable (having money doesn’t make a depersonalized cocaine addict cool, kids). But with a spectacular cast  that includes Don Cheadle, Regina King, Andrew Rannells, and Paul Scheeras, I’m willing to let it slide and check out this hilarious retelling of what probably didn’t cause the worst stock market crash to date. What Black Monday does best is compare race, gender, financial issues of now to those in the 80s. It’s a brilliantly blended think piece that is as funny as it is insightful.

Season three of the comedy focuses on burnout of all kinds, proving creators Katja Blichfeld and Ben Sinclair know stories that capture the ethos of right now. The show gathered a cult following as a web series before being picked up by HBO. While most episodes are loosely connected stories about New Yorkers looking for a hit and the cycling dealer known as “The Guy” (played by Sinclair), Blichfeld says season three will focus on “moving on.” Season two dove more into “The Guy’s” background, and a decision to move on could mean the end of the show following this character who, now in his thirties, is realizing how lame it is to weedle out a living selling dime bags to NYU students. Or maybe he’ll just move on to larger shipments.