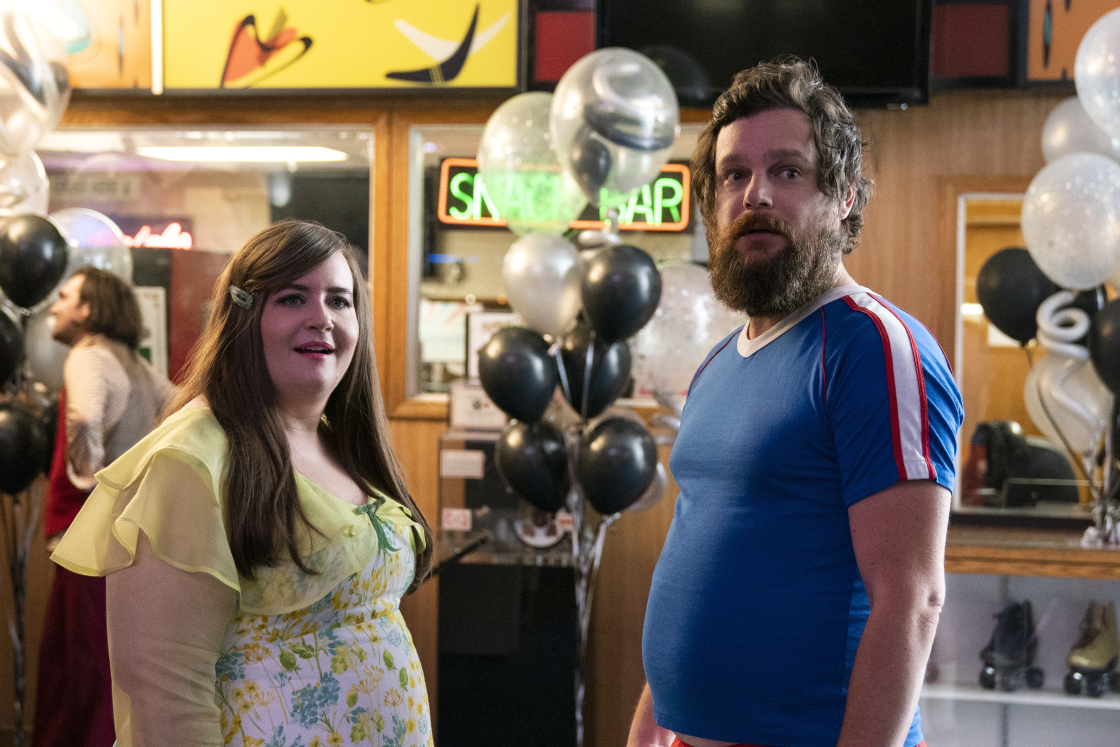 Luka Jones knows you’re not rooting for him.

Or, perhaps more accurately, he knows you’re not rooting for his character. As the hilariously inept Ryan on Shrill opposite Aidy Bryant’s Annie, he plays a classic loser boyfriend: He cheats. He asks Annie to leave out the back door after they hook up so she won’t be seen by his roommates. He’s got a kid he didn’t bother to tell her about and no discernible source of income. So as Jones heads into Season 2 (out January 24th on Hulu), he’s at peace with the fact that you’re not in Ryan’s corner.

“After the first season got released, I was sitting at my local coffee shop and it was pretty crowded but a woman across the way noticed me and sort of signaled that she recognized me from Shrill,” he tells InsideHook. “She mouthed the words, ‘I love the show,’ or something like that. It was clear what she was talking about because it’d just come out. And I’m like, ‘Thanks so much.’ I go over to her after a little bit and I go, ‘It’s so, so nice of you.’ She said really lovely things about the show in general and Aidy and everybody. And I was like, ‘That’s so nice. It’s so nice. I really appreciate it. I’ll pass that along.’ And then I went back and sat down to finish my coffee. And as she was leaving, she’s like, ‘I do want her to dump you though.’ And I was like, ‘I get it. I understand.’”

That seems to be the general consensus when it comes to Ryan, but part of what makes him so compelling is that it becomes clear over the course of the show’s first season that — despite his obvious lack of success — he’s trying. He’s a twist on the bad boyfriend trope, what The Cut dubbed “the bare-minimum boyfriend.” (“The BMB,” Jones says with a laugh.) He’s not malicious; he’s just clueless.

“There’s almost nothing I could do to make some of those situations feel anything other than, at the very least, deeply insensitive on his part,” Jones says. “And I guess this is the way I think of him: I don’t think he’s meaning to be deeply insensitive. I think it’s accidentally deeply insensitive, which isn’t any less hurtful. He loves her, he cares about her and he just doesn’t know how to do it in a way that’s feels consistently loving. But from the inside, I just play it like he loves her. And then sometimes I say words that I, Luka, know aren’t going to feel very loving to her character.”

“It’d be different if he was the kind of boyfriend, I don’t know, explicitly calling her bad names or something like that,” he continues. “And then having to pull it back and go like, ‘I’m sorry, I’m sorry. I know, I’m sorry. I’m awful.’ But he’s just in a way like a puppy dog who doesn’t know the rules and hasn’t had to learn them, maybe is privileged in that way … I think all the moments that he seems like a real crappy boyfriend are ones where she’s there. It’s not like he’s saying anything behind her back or anything like that.”

There’s an earnestness and a naivety to Ryan that endears him to us. (After Annie’s mom jokes at dinner that he has permission to slap her if he sees her reaching for the bread bowl, he responds gravely, “I would never hit a woman.”) He doesn’t underestimate her like her boss does, and he’s not cruel to her like the online troll who comments on her weight and even brings up her dad’s cancer. But that’s not enough to make him a worthy partner.

“I’ve never played a character like this where people had emotions about my character,” Jones says. “I mean, I’ve played a character where people were like, ‘Yeah, man. I like you in whatever.’ But I think the meaningfulness of this show [stands out], especially for certain segments of the population, and I don’t mean just the obvious ones. Just anybody who really connects with the idea that it can be tough to be comfortable in your own skin if you’re not already automatically that way.”

Whether or not it comes naturally or takes time to achieve, that comfort is key — and it’s something that has guided Jones through a PhD in philosophy and his time as a performer at the Upright Citizens Brigade in Los Angeles all the way to Shrill. As he tweeted recently, “A trait I luckily ended up with is that I find it thrilling to be around people who are funnier and/or smarter than I am.”

“I feel like feeling good about that, it allowed me to really enjoy it when people are really comedically talented or incredibly intelligent and benefit from those traits in them instead of feeling overly competitive with them or whatever else sometimes people feel or maybe sometimes are diminished by that,” he explains. “It’s just really exciting to me.”

That geniality and unflappability might serve him well once his unpopular opinion about Annie sticking with Ryan for the foreseeable future gets out.

“I think she’s being brave [by staying with him],” he says. “Like a lot of us have to be in the face of somebody behaving in a way that doesn’t conform to what we prefer or what we’d ideally prefer, whether or not we’re even expressing that. I think she should stay with him as long as she feels connected to him in the way that she does and as long as he’s helping her — not on purpose — work on her ability to ask for what she really wants and deserves … And so far as he stops helping her with that or she outgrows him or something like that, if that happens, then I understand her letting him go.”

Of course, he’s fully aware that you disagree, and he understands that as well.

“I just think he’s a triggering character for some people, and I think that’s part of what makes him interesting to play and maybe part of what makes him an interesting and useful aspect of the show in respect to Annie’s main story,” he says. “You want the viewers to feel something. And if it’s like, ‘Fuck that guy,’ then that’s great. It’s cool.”