The 1,640-foot Aperture Spherical Radio Telescope (FAST) is seen on its first day of operation in Pingtang, in southwestern China's Guizhou province on September 25, 2016. The world's largest radio telescope began operating in southwestern China on Sept. 25, a project which Beijing says will help humanity search for alien life (STR/AFP)
By Will Levith 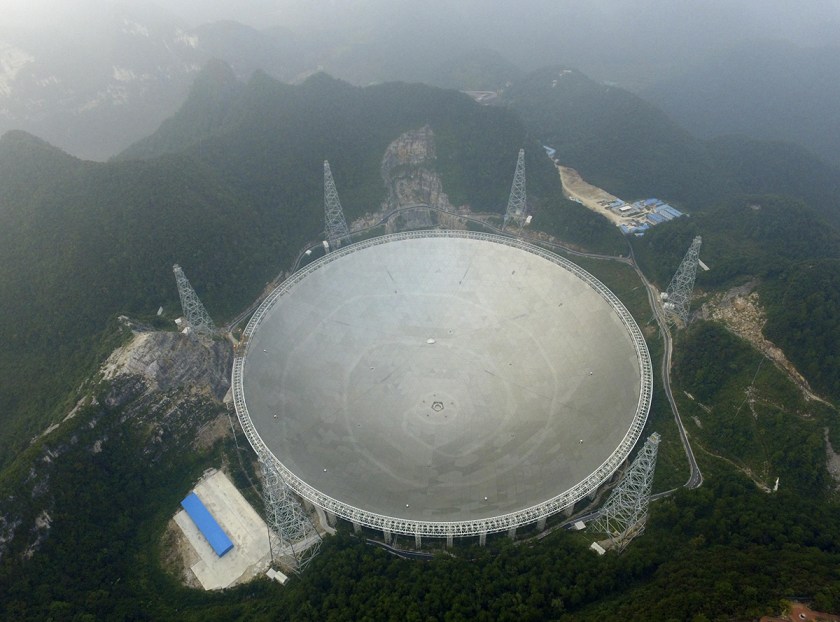 The 1,640-foot Aperture Spherical Radio Telescope (FAST) is seen on its first day of operation in Pingtang, in southwestern China’s Guizhou province on September 25, 2016. The world’s largest radio telescope began operating in southwestern China on Sept. 25, a project which Beijing says will help humanity search for alien life (STR/AFP)

The 1,640-foot Aperture Spherical Telescope (FAST) in the country’s southwest, which began operations in September and cost 1.2 billion yuan ($180 million) to build, is the world’s largest radio telescope. Once fully operational, FAST will be able to peer deeper into space than ever before, examining pulsars, dark matter, and gravitational waves—and searching for signs of life. 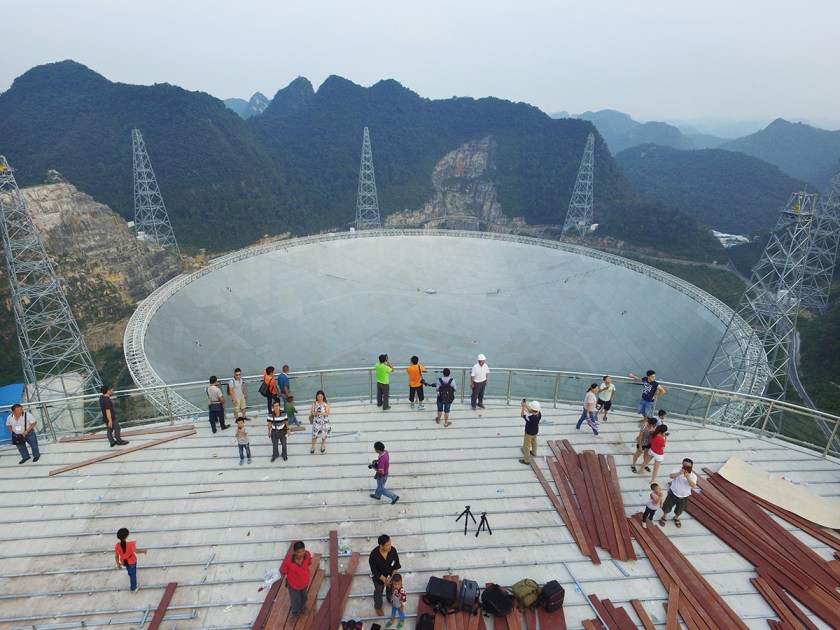 Aerial view of tourists looking at a dish-like radio telescope at Pingtang County on September 17, 2016, in Qiannan Buyei and Miao Autonomous Prefecture, Guizhou Province of China. After five years’ construction, the 1,640-foot Aperture Spherical Telescope’ (FAST) was put into use on Sept. 25. (VCG/VCG via Getty Images)

Authorities also hope it will bring tourist dollars to the province of Guizhou, one of China’s poorest regions. But it comes at the cost of forcibly displacing about 9,000 villagers who called the site in Pingtang county their home. Many were outraged at being forced to leave the valley surrounded by forested karst hills, and hundreds of families are now suing the government, with some cases being heard in early December.

Many were outraged at being forced to leave the valley surrounded by forested karst hills, and hundreds of families are now suing the government, with some cases being heard in early December. Octogenarian Han Jingfu drank pesticide days after being made to sign a relocation contract and died at his front door, neighbors and relatives said.

China built FAST as part of efforts to take on international rivals and raise its embarrassingly low tally of Nobel Prizes, explained Peng Bo, director of China’s National Astronomical Observatories, which oversees the telescope. The 1,640-foot dish dwarfs its nearest competitor, the U.S.’ Puerto Rico–based Arecibo telescope, which is only about 1,000 feet across.

“We said we had to be a little more daring, because we had to surpass the U.S. no matter what,” Peng said. “I think we can get a few Nobel Prizes out of it. We as Chinese people really want to win them.” The world’s most populous country and second largest economy has, so far, only won one scientific Nobel Prize, awarded last year to chemist Tu Youyou for medicine.

FAST’s receivers are more sensitive than any previous radio telescope, and its pioneering technology can change the shape of the dish to track celestial objects as the Earth rotates. It could catalog as many pulsars in a year as had been found in the past 50, Peng said. But he acknowledged that FAST will be overtaken by the larger Square Kilometer Array telescope in South Africa and Australia, which will be built over the next decade. 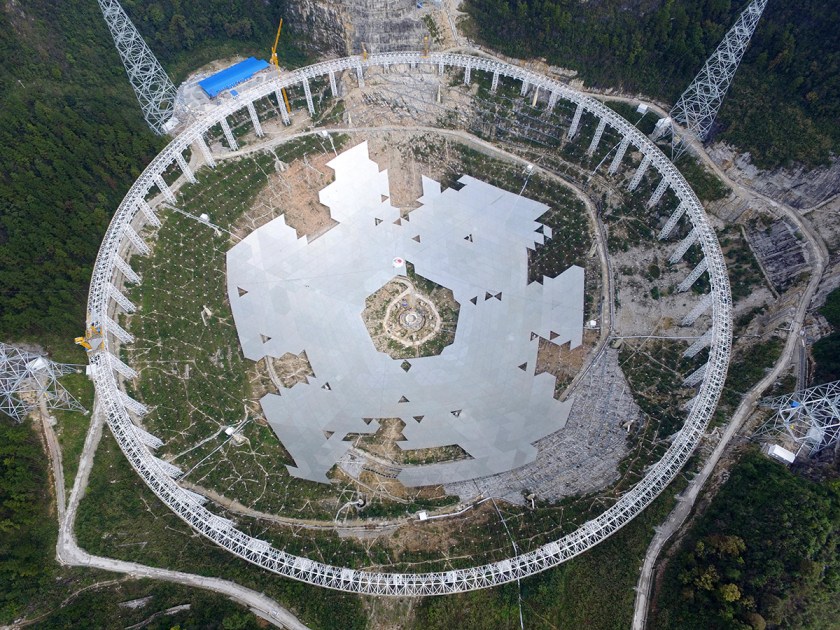 The feed supporting system of the 1,640-foot Aperture Spherical Radio Telescope (FAST) is under test on November 26, 2015, in Pingtang County, China. The construction was completed in September 2016. (VCG/VCG via Getty Images)

‘Pushed Into a Corner’

FAST needs a three-mile-wide “radio silence” buffer zone around it with electronics banned in order to reduce interference with the sky’s much fainter frequencies.

Relocated residents would “enjoy better living standards,” the official Xinhua news agency said when the dish was completed in July. “Villagers in nearby communities admired their luck, saying they should ‘thank the aliens,’” it added. But locals allege land grabs without compensation, forced demolitions, and unlawful detentions, and up to 500 families are suing the Pingtang county government.

Lu Zhenglong, whose case was heard back in November, said officials demolished his house without warning or consent when he was not even present, burying his furniture. “What would have happened if I had been inside?” he told AFP, adding that authorities had “pushed ordinary people into a corner. It’s really unbelievable.” A neighbor also surnamed Lu said: “They’ve chased us all off to some wasteland and ordered us to live there with no way to maintain our old standards of living. For 90 percent of us, basic survival is a problem.”

The rubble of their homes now lies under soil and new saplings in a tourist park just outside the radio silence zone, with a museum, a space-themed hotel, and visitor reception facilities which will sell tickets for nearly $100 each. According to the Pingtang county government website, the park was aimed at “high-end people from developed cities” and cost over 1.5 billion yuan—more than the telescope itself. 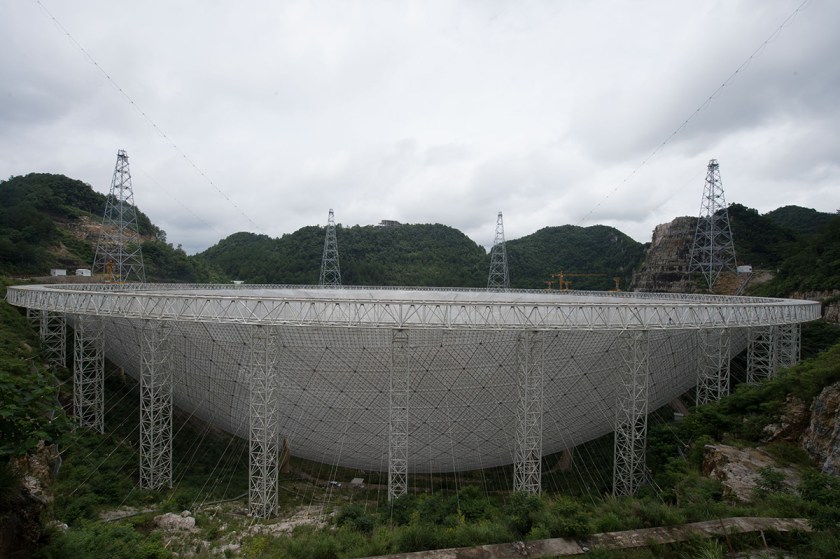 Workers lift the last panel to install into the center of a 1,640-foot Aperture Spherical Telescope (FAST) on July 3, 2016, China. (VCG/VCG via Getty Images)

Meng Xiujun, whose Elites Law Firm in the southern city of Guangzhou is handling most of the cases, said officials tried to intimidate him, telling him he should “see the bigger picture for a key national project.” But he told AFP: “This isn’t just a matter of economic interests—once you start asking average citizens to kneel down or beat them, it becomes about human rights and problems with China’s rule of law.” The Pingtang county government did not respond to requests for comment by AFP.

Andreas Wicenec, head of data-intensive astronomy at the International Center for Radio Astronomy Research in Australia, said that FAST had “world class” potential and its engineering was “absolutely a marvel.” Unusually, the FAST program was “remarkably, extremely open” to outside collaboration, he said. 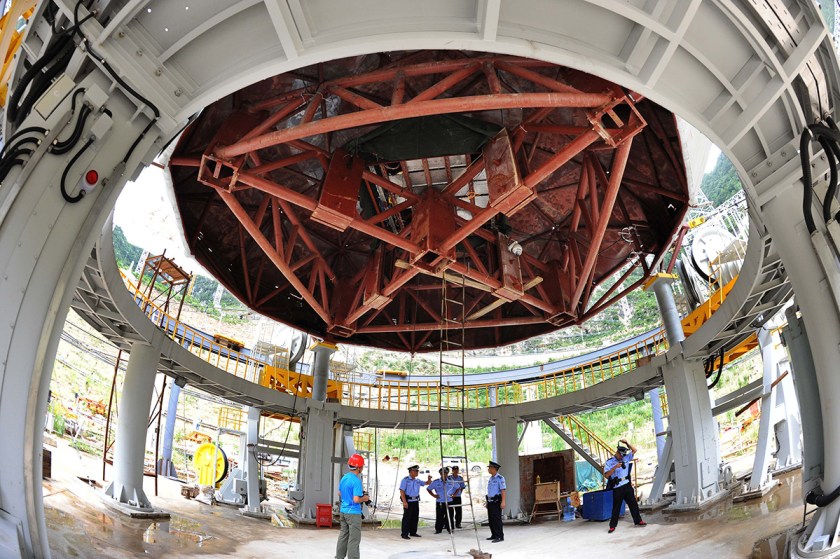 It was not clear how many tourists have visited the park since it opened—almost none were present when AFP visited recently. But authorities have high hopes.

Along the roadside, government-sponsored billboards emblazoned with the dish declared: “Rapidly build a unique astronomy tourism site based on ‘China’s eye to the sky.’” —Relaxnews

To take a visual tour of the telescope, follow the BBC in this video report below.

The 20 Best American Hotels to Visit for the Holidays in 2020
Revisiting the P-47 Thunderbolt, the Plane That Helped Win World War II