‘Smart Cities’ of the Future Will Require More than Big Data

Data collection must be complemented with problem-solving infrastructure and public transparency.

When New York City started replacing 7,500 unused pay phones with high-tech kiosks emitting free wi-fi, the mayor’s office was sending a message: out with the old and in with the new. The “LinkNYC” kiosks, which have USB ports for phone charging along with embedded tablets for access to city maps and services, are an effort to modernize the Big Apple—and ultimately, bring it into the future.

Yet, the buzz around LinkNYC has died down considerably since it was rolled out, in part, because of the way it was done. Residents concerns about privacy and security led some to question the kiosks’ utility. One person described LinkNYC as a “sophisticated billboard.” If more input from the community had been sought out, policy experts think the kiosks would’ve been embraced more and been able to deploy its full capabilities, making New York City a little more “smart.”

The term “smart city” is often tossed around to describe a municipality with sensors integrated into everything from manhole covers to street lights and traffic signals. The ultimate goal is leveraging this quantifiable data to improving the city. It’s like taking a 19th-century post office and upgrading it to run like one of Amazon’s automated warehouses.

“Right now, so much of our infrastructure is stand-alone and static. We don’t’ really know what’s going on,” said Eric Goldwyn, Research Affiliate at Columbia University’s Center for Sustainable Urban Development. “Having infrastructure that we can communicate with and learn from, that’s ultimately, I think, very powerful.”

As such, governments around the globe are racing to infuse technology in just about every aspect of their municipal operations, from public transportation and urban mobility to energy and sanitation. Many are relying on the notion big data will help as urban population density increases.

The potential impact is huge. Half of the world’s population currently lives in urban areas, but that is expected to grow to 70 percent by 2050, according to the United Nations. As the number of city dwellers rises, so do problems. Headaches for city managers will become critical issues for entire cities in a few decades.

Overcrowding, housing shortages, and aging infrastructure that includes mass transit, bridges, and highways will face increasing strains that present problems municipalities hope to fix with data-driven solutions. “The thing that’s so exciting is the process of counting has become so much easier. We can do it so much more accurately and on a much wider scale,” Goldwyn said.

Carlo Ratti, Director of the Senseable City Lab at MIT, compares the modern city to “computers in open air.” He views the “smart city” movement as one element in a much larger trend: “the Internet is entering the place we live in and is becoming ‘Internet of Things,’ allowing us to interact with the space around us in new ways.”

Cities in the last decade, Ratti says, became blanketed in digital technology, from industrial control systems and various public sensors to smartphones and tablets, which form “the backbone of a large, intelligent infrastructure,” Ratti said.

While the Internet can certainly act as the connective tissue throughout a city’s infrastructure, each sensor still produces disparate data streams. Adding all these sensors is not a panacea. Intelligent design and comprehensive thinking must tie all this data together and make decision making better and easier.

“It’s not just the application of technology that makes a city smart, there’s a lot around it that has to be done right,” said Ben Green, a fellow at Harvard University’s Berkman Klein Center for Internet and Society.

To him, cities shouldn’t just be thinking about technical solutions to solving problems. Instead, he says municipalities need to determine if the technology is well adapted to the problem it’s trying to solve and if it does so in “a thorough, responsible, and effective way.” 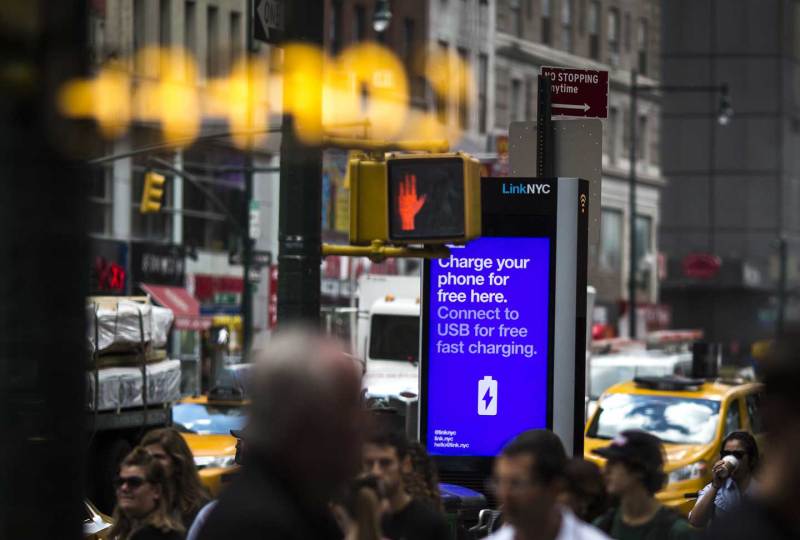 LinkNYC, Green says, is a “well-intentioned effort that maybe focuses a little too much on surface level technology and not much the architecture or the way in which that technology was deployed.”

Signed to a decade-long contract, Intersection, the Alphabet-funded startup behind the LinkNYC kiosks, will be updating the hubs periodically to stay relevant and modern. Some of the improvements reportedly being considered include environmental sensors for air quality and video sensors to spot “abandoned packages or objects.”

In fact, LinkNYC’s privacy policy shows the entire kiosk is embedded with cameras, including on the tablet, that are capable of giving Intersection a full 360-degree-view. According to Recode, these cameras were never turned on because of public concerns about privacy.

Green thinks the city didn’t gauge opinion well enough about the risks of data collection and surveillance that community members might be willing to trade for the benefit of free wi-fi.

“If they had done a better job of talking to the community and developing a privacy policy that addressed the use of that data… they could potentially be able to use that technology in a better way since right now those cameras aren’t being used at all,” Green said.

Cities like Oakland and Seattle have citizen advisory boards to engage with public officials, providing critical feedback on these sorts of issues to ensure the municipality’s goals line up with citizen’s values. “At a minimum, the level of citizen engagement needs to be comparable to potential impacts, both good and bad, of the program,” said John Verdi, Vice President of Policy at Future for Privacy Forum.

In the heart of downtown Kansas City, there’s an array of smart devices, including magnetic sensors that identify an available parking spot and smart streetlights that automatically dim when no one’s underneath, producing a stream of predictive data for municipal officials. It’s also available to public online, packaged into a neat dashboard with graphics displaying real-time information like traffic.

According to Bob Bennett, the city’s Chief Innovation Officer, these are the 51 smartest blocks in the United States. It all started with pot holes, “the most boring thing I ever thought I could get engaged with,” he says. Bennett exuberantly explains how Kansas City’s public works department can predict within a block where the next pothole is going to occur.

Using an algorithm that incorporates traffic data from the sensors downtown along with weather reports and municipal records, the public works department determined 12 pothole-causing factors and used them to map out proactive maintenance. The data-driven strategy allows Kansas City to maximize the $4 million allocated for road repair annually. Typically, this funds one percent of the city’s road resurfacing, but the predictive algorithm stretches the budget to cover three or five percent, according to Bennett. “It’s crazy the way that this mundane stuff that people do is having an effect on people’s lives,” he said. 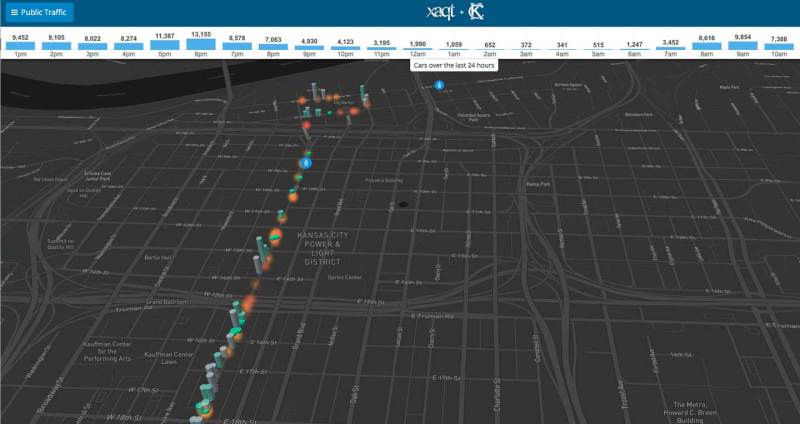 Still, Bennett believes data will become its most valuable commodity. “I am most excited about applying a suite of data analytics solutions to those existing 4,000 sets of data that I currently have in Kansas City, augmenting that, and refining it with sensor-based technologies that allow me to—on a single pane of glass—take the pulse of a city,” he explained.

That’s the dichotomy of the “smart city” movement, which revolves around building a city-wide network of sensors. It’s often billed as a way to usher in a futuristic metropolis where crimes are prevented before they happen and autonomous vehicles are synched up to reduce traffic accidents or congestion. The reality is less Jetson-like. It’s leveraging data to help cities operate more efficiently.

It’s impossible to avoid the hype that’s attached to anything described with a slew of buzz words like big data and the Internet of Things—even “smart city” is a buzz word itself. Perhaps, the term is too specious to temper expectations.

Instead of the phrase “smart city,” Ratti prefers to call it a “senseable city,” a double meaning that captures its ability to sense and its sensible application. The term, he explains, “puts more emphasis on the human—as opposed to technological—side of things.” It’s an idea that gives more credit to the Bob Bennett’s of the world and certainly one that others in the field, like Ben Green, agree with.

Embedding sensors into public infrastructure without centralizing and securing the data doesn’t make a city smart or sensible. If anything, it creates more privacy concerns and security risks. “This is kind of like giving everyone an ice cream,” said Albert Gidari, Director of Privacy at Stanford’s Center for Internet & Law. “Before you know it, what sounded like something for the greater good that we all liked, is killing us,” Gidari said.

Instead, “smart” or sensible cities would view sensors not a solution of itself. Technology can be helpful, but only when connected the right way augmenting something humans don’t do well. New York City’s Shotspotter system, for instance, can help triangulate a shooting with microphones engineered to only listen for gunshots. This eliminates a risk for privacy invasion while reducing the EMS response time.

Green explains that cities are better off when they view sensors as a way to generate data analytics that can shift how policies are implemented. “There are all sorts of innovations that are necessary to enable the technology to be valuable and can occur without technology to improve city government,” he said

Right now, various departments operate within silos, but the right data can be used to integrate them effectively to holistically inform predictions benefiting the entire city. Some real examples of this include predicting the risk of fires, food violations, or lead exposure to children. Green also points to social services as an area where this predictive analytics can be helpful. “Before someone ends up in jail, they might be better served with mental health counseling or addiction and homeless services,” he said.

Privacy advocates like Gidari question what most people will be willing to give up in order to have the societal gains, especially without knowing how it happens. “All of a sudden you’re getting alerts on your phone that says potholes will be filled on your street and you’re happy about it, but you have no idea what went into that on the back end. I think most people will not even see the collection activity,” Gidari said. “It doesn’t have to be your home that’s being invaded to be a concern. It’s the sidewalk, the street, the streetlight, the telephone poles. They’re all being outfitted with sensors.”