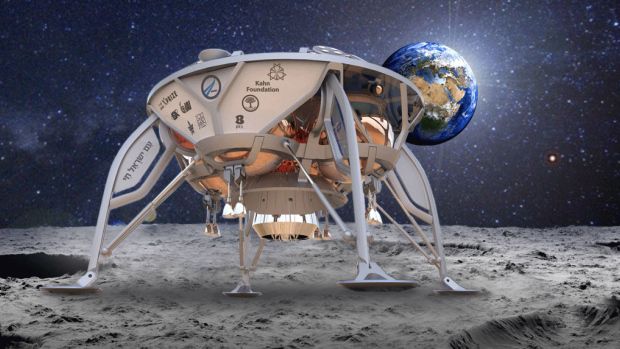 Israel's moon lander hit a snag on it's way to the moon carrying 30 million pages worth of humanity's greatest achievements. (SpaceIL)
By Chase Hill / February 27, 2019 12:45 pm

Beresheet, the moon lander built by an Israeli nonprofit, hit a snag during its planned moon mission as it attempted to burn an engine to raise its orbit around the Earth. SpaceIL says it’s looking into the situation with help from the Israel Aerospace Industries (IAI).

“At this time, the spacecraft’s systems are working well, except for the known problem in the star tracker,” SpaceIL said in a statement.

SpaceIL has not released more information about the orbiting issue, however they did experience a different issue last week then they found their star tracker was blinded by the sun’s rays.

The moon lander, if it successfully lands on the moon, would make Israel the fourth country in the world to make it to the Earth’s magnetic neighbor. SpaceX successfully launched the lander into space last week.

In addition to other scientific equipment the moon lander is also carrying 30 million pages worth of an archive of humanity’s greatest achievements.

According to Fox News, the archive is stored on 25 DVD-sized discs made of nickel, measuring only 40 microns thick and include information about mathematics, aerospace, women’s studies and humor.

The Arch Mission Foundation is releasing the information gradually due to various partnerships. “Much more content will be revealed…,” the agency told Gizmodo.  “Rather than rely on problematic curations of material, we want to include the full breadth and diversity of recorded human knowledge and culture and a record of the life and civilization of planet Earth.”

Over 60,000 images of documents, photos, illustrations, and photos are included on the discs with more hopefully making their way to the moon on future trips.