Buddhist Priests Can Be Ordered on Amazon in Japan

Forget to arrange a Buddhist monk for your latest wedding or funeral? If you’re in Japan, Amazon has got you covered. Obosan-bin, or “Mr. Monk Delivery,” is a service offered through the mega e-commerce site in conjunction with Minrevi, a Japanese startup that offers 400 rentable priests.

Even though three-quarters of Japan’s population doesn’t identify with any religion, Buddhism remains a cultural touchstone for important life events, like funerals. Since many Japanese do not regularly attend their temple, they’ve turned online to help connect with their culture’ religious heritage.

Some critics complain Obosan-bin will erode the support Japan’s 75,000 temples receive from their local patrons, while others believe the delivery service simplifies the process of arranging a monk for a family event. The usual route of hiring a monk can be confusing for those unfamiliar with it, especially when it comes to payment; donations are required, but often not clearly articulated. Minrevi hopes to ease this transaction.

“Many people don’t have ties with temples and they have no idea where and how to arrange Buddhist rituals, while monks are increasingly concerned about their declining temple membership,” Minrevi spokesman Jumpei Masano told Mashable. “We can cater to the needs on both sides and hopefully we can bring them together.”

To a hire a monk with Obosan-bin, the basic plan costs around 35,000 yen ($340) and that includes transportation and donation costs. Japanese funerals, with the elaborate rituals, are among the world’s most expensive. Minrevi markets itself as a budget-friendly alternative to traditional memorial services that can cost up to three times as much. 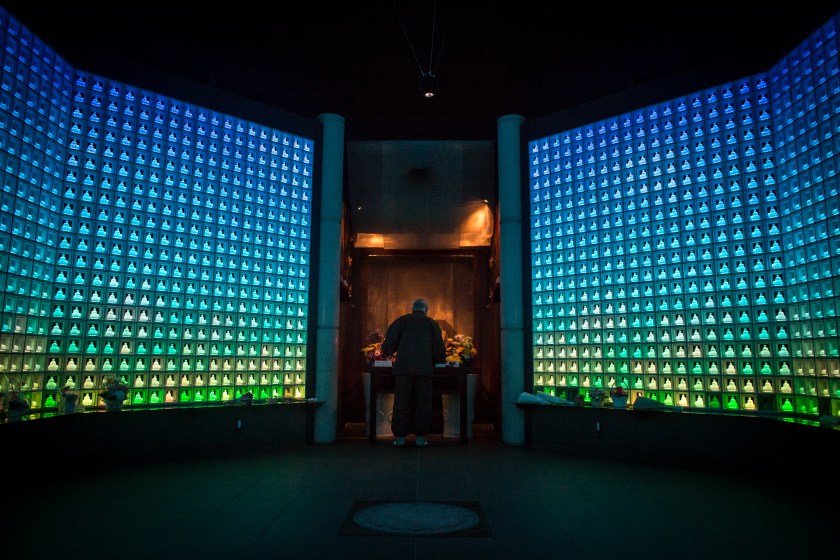 Koukokuji temple head priest Yajima Taijun demonstrates a prayer ritual inside the Ruriden columbarium as glass Buddha alters are lit up on April 6, 2015 in Tokyo, Japan. The Ruriden, operated by the Koukokuji buddhist temple, took two years to build and houses 2046 futuristic alters with glass buddha statues that correspond to drawers storing the ashes of the deceased.(Chris McGrath/Getty Images)
Getty Images

Obosan-bin is only a recent example of Japanese Bhuddism trying to modernize itself. In 2015, a futuristic columbarium, called the Ruriden, was erected in Tokyo. Families that keep their loved ones at the Ruriden receive an ID card that is associated with their urn. When guests arrive with the ID, lights guide the visitors to the loved one’s urn identified with a modern Buddha statue.