A Detailed Look at the Cost of Building a Death Star

Of all the things from Star Wars that captured the public imagination, perhaps none is so overwhelming as the Death Star. After all, it’s the size of a good-sized moon, and it has the power to destroy an entire planet. Ever since the release of the first installment in George Lucas’ series in 1977, fans have been wondering if such a thing could actually be built. Now, thanks to the good people at Twizzle.co.uk, we have a cost estimate… and it’s a doozy (click here to see it in full size). 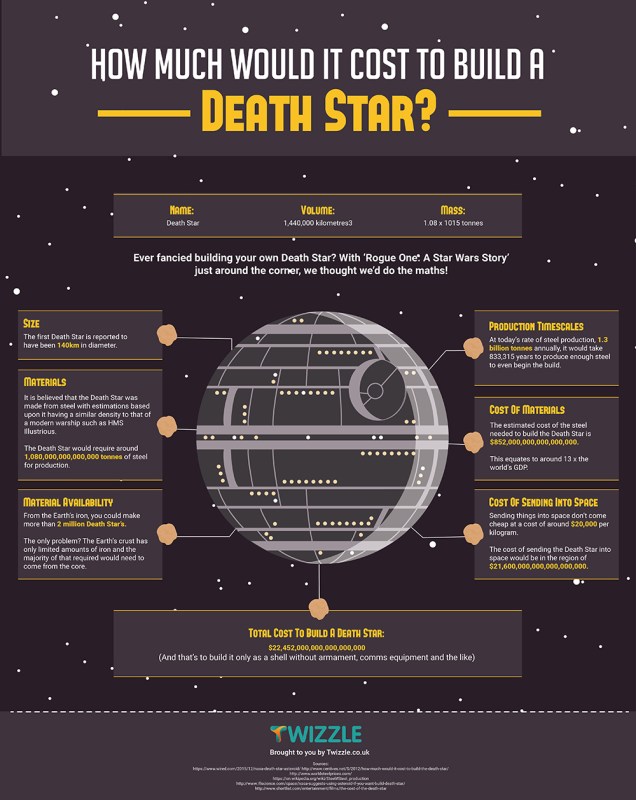 Yes, that amount is $22,452,000,000,000,000,000. (With 15 zeros.) And this is only for the “shell”, meaning you’d have to spend another frightening sum to make it into a functional weapon. So while we seem no closer to building our own actual Death Star, it does remind us that, on top of everything else, the Empire was extremely well-financed.

Speaking of the pseudo-celestial body, the latest Star Wars film in the franchise Rogue One: A Star Wars Story is set before the original films and centers around the rebel plot to steal the Empire’s blueprints for the Death Star. The movie, starring Felicity Jones and Donnie Yen, will be released in the United States on December 16. Watch the Rogue One trailer below. And then, take a look at the original trailer at the bottom to appreciate just how far we’ve come.