The 10 Best Shirt Jackets for Men

Shackets, CPOs, Jac-shirts ... by any name, they are the best 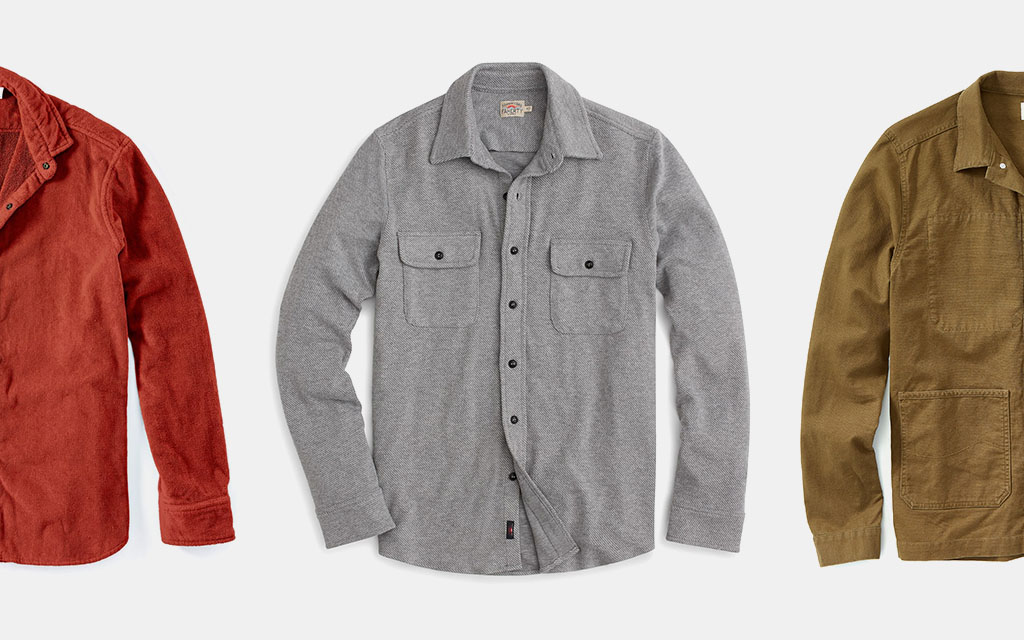 It’s pumpkin patch weather, people, and we are pumped.

Summer has a frustrating tendency to overstay its welcome, and after spinning our wheels on our 150th iteration of canvas sneakers, chinos and short-sleeves since Memorial Day, we’re welcoming any and all chillier mornings out there, along with the chance to head out in boots, jeans and multiple layers.

Included in those layers is our single favorite piece in the whole wide world of menswear: the shacket. That’s a unnecessary (but fun) portmanteau to describe a button-down with the look of a shirt and the heft of a jacket, which dominates shoulder month seasons. Shirt jackets, like much of modern menswear, hail from a 20th-century cocktail of working man’s clothing and armed forces-commissioned fabrics. As consumers have come to reconsider fast-fashion, conscious, creative brands have pulled these looks from sepia photographs and revived them with fabric blends more durable (and environmentally conscious) than anything our ancestors ever sweat into.

The result is a classic look, and a garment ideally suited for days ranging from crisp to freezing and occasions ranging from the workplace to Thanksgiving. Shirt jackets are vague enough in designation that some simply resemble thicker button-down shirts, while others are insulated with full-on brushed blankets. They include chore coats, flannels, corduroy-reminiscent weaves, and even water-repellent shells. You can wear them closed, with a crisp undershirt underneath, or open, with a tee depicting a bar around the corner. It’s your call, man. The best way to know when you’ve stumbled upon a shirt jacket? You probably wouldn’t trust it on its own below 50 degrees. That said, it can make for an ideal extra layer when the big dog jackets come out over the winter.

We recently tested our 10 shirt jackets from a range of brands: everyone from Everlane to Smartwool’s got a version. They’re all a little too different to compare against each other, but we were able to deduce a superlative for each. One’s easy on the environment, another wins on the coziness front, etc. Peruse and take your pick. Then set forth and find yourself a great pumpkin.

We’re not entirely sure how the softest shirt jacket we tested isn’t 100% cotton. Faherty, one of the best men’s brands in the game right now, actually employed a polyester-viscose-spandex blend that has four-way stretch (a method favored by most activewear brands these days). That means this shirt has a bit more backbone, won’t shrink, and allows for an heightened range of motion than you’d normally find in a flannel button-down. But somehow, this is also just an unconscionably soft shirt. You could wear it over an undershirt, but it feels like a blanket against bare skin. Pick it up in Steelhead Grey (pictured above), or in Arctic Buffalo, which features a plaid pattern.

Huckberry launched Wellen earlier this year, and we’ve written at length about the brand’s surf-inspired duds: hemp tees, boardshorts, and beach crewnecks. It would appear the brand’s got a great read on workwear too, and can make some of the style’s most iconic pieces, without sacrificing it’s environmentally-conscious ethos. Their Stretch Chore Coat is 66% organic cotton and 32% hemp. That means that no pesticides and a whole lot less water were used to construct the coat. We wore this coat last Friday for a full day and it handled every situation we threw at it: those front pockets can fit a full book, which we learned on an afternoon walk, and that canvas exterior doesn’t stain … which we learned after getting sprayed with beer at a raucous playoff baseball game.

Shirt jackets often invite debate over nomenclature. Is it too shirty to be called a jacket? Or vice versa? Everlane doesn’t really care. The SF-based masters of basics officially call this piece an “Overshirt,” but acknowledge it could function as an “over-jacket” or “over-sweater,” too. We enjoy wearing this shirt jacket with the buttons up, as it easily pulls off a more formal look, without sacrificing the comfort you’re accustomed to from the softer layering pieces in your closet. The material is an 8 oz. heavy cotton twill (which Everlane notes is twice as heavy as its Japanese Oxford cloth), and the two front pockets give it an extra dose of character. Thanks to Everlane’s accessible pricing, this is also one of the best deals you’ll find on this list.

Bedford fabric is a weave with vertical, cotton yarns (similar to corduroy, though thinner) that hails from Bedford, England, a town outside London. It’s historically been used to craft tough, work-ready chinos, and an iteration called “Jungle Cloth” was even used to create flight uniforms for the U.S. Navy. But Flint + Tinder decided to use it for a light shirt jacket, and it was easily one of the best we tested these last few weeks. The metal plackets, oversized pockets, and double collar gives the shirt a folksy feel that pairs perfectly with your favorite jeans. We wouldn’t recommend wearing this alone if it’s too chilly out — there isn’t much insulation on the inside. But throw this under a trucker jacket and you can do no wrong.

Adam Mar is based out of Montauk, so it’s hard for its designers to go too long without thinking about the beach. Naturally, then, here’s the Montauk Oxford: a button-down mixed with a beach towel. This 14 oz. organic terry cloth shirt is the most relaxed of any piece we tested here. We would probably argue too relaxed for every situation; your company’s Fridays better be aggressively casual if you want to roll in in this. But that color, “King Salmon,” is unbeatable and perfect for fall.

Be they days in the woods, in the backyard, at a tailgate … you get it. Howler Brothers hails from Austin, and this quick-drying, snap-up plaid shirt is probably all you’d need when walking out of the house down there for the next several months. In colder areas, it’s a good base layer, and the polyester/rayon/spandex blend means it can handle chopping wood or throwing a football or whatever men like to do these days with a bit more flexibility than flannels from decades past. Our only points of concern are the size (it runs big in the arms) and the “BROS” decal on the left breast, which reads a bit silly.

Proof is Huckberry’s in-house adventure brand, and the team recently designed a capsule collection with Men’s Health, which included this double-sided shirt jacket. We’d probably be reluctant to give it the shirt jacket designation if it were just the black water-resistant shell, but the inclusion of the olive polyester interior makes sure it qualifies. There doesn’t seem to be an obvious 9-5 use-case for this piece, but that might sort of be the point. You’re ready for really anything, and have two looks for the weight of one (without any labels showing when you reverse, we should add). That versatility also makes this a good travel option, when packing space is tight.

Yep, Faherty won the “Softest” and “Coziest” titles. That this CPO Jacket can appear on the same list as the Legend Sweater Shirt is the ultimate testament to the dynamic shacket. As for Faherty appearing twice … just go buy their whole damn fall catalogue. This jacket is cotton all over, though the interior is a brushed cotton meant to mimic your favorite living room blanket, and the exterior is a textured dobby cotton with fisheye buttons. There are 85 days left in 2019. We expect to wear this thing for at least 60 of them.

You probably know Smartwool for their exemplary selection of socks suitable for all sorts of outdoor pursuits. Or maybe you know them for their remarkably odor resistant merino wool baselayers. But you should also know that they make some damn fine outerwear as well, like this versatile, good-looking shirt jacket. It’s lined in merino, so it’s comfy as hell, but the exterior is made of DWR-coated (Durable Water Repellent) nylon that’ll keep you dry and safe from any potentially bone-chilling winds that may come your way. Lots of pockets and a lot of outdoorsy tech packed into a very casual silhouette.

This take on the shirt- jacket from the venerable chinos brand definitely leans more shirt than jacket, but with an added element of softness that makes it seem like the kind of thing you could wear to the bar to watch football and drink beer, if only you had the energy to get off the couch, where you are currently seated to watch football and drink beer. By which we just mean it’s really soft and really comfortable.