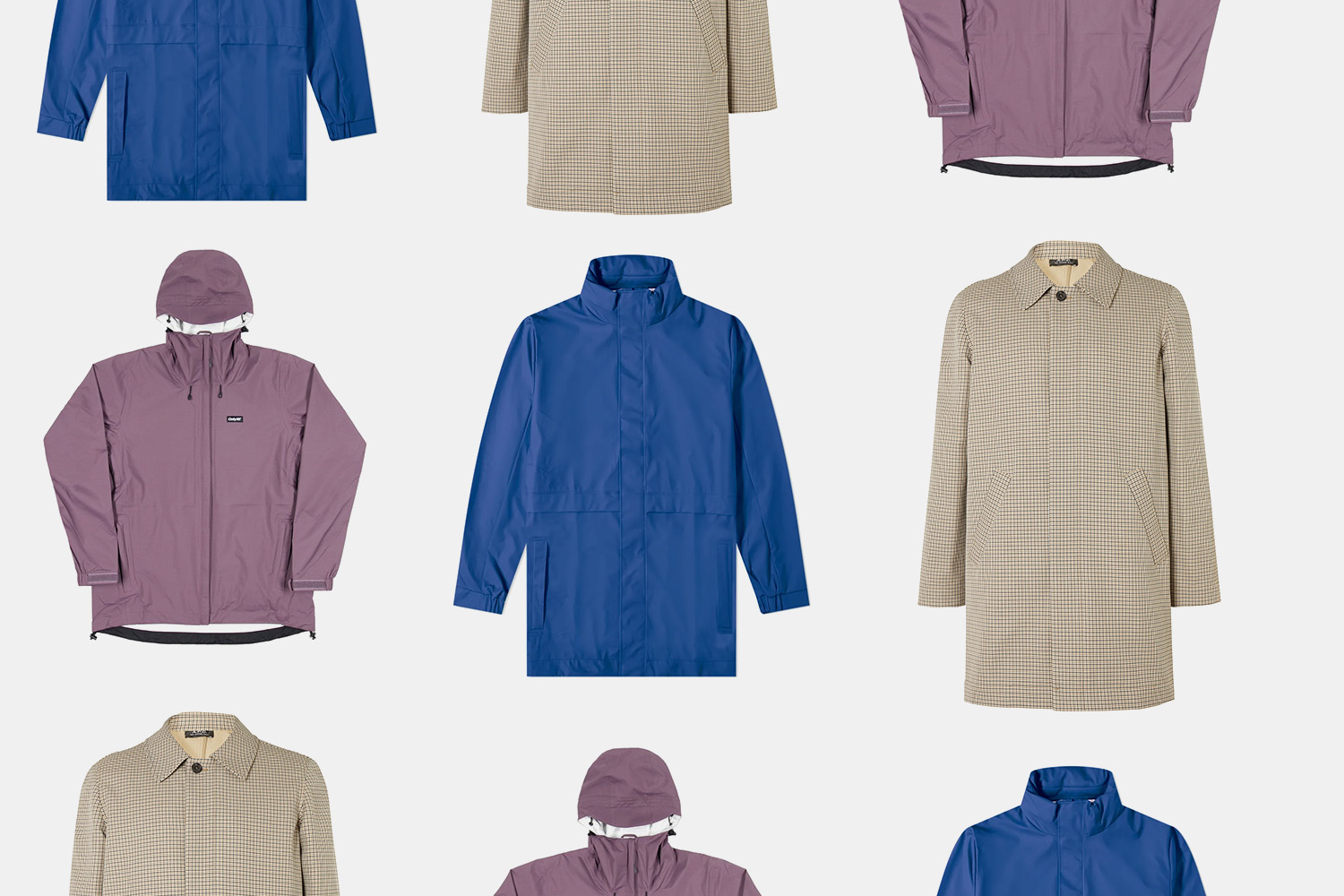 Rain sucks. It’s cold, it’s wet, it’s annoying. Getting dressed for the rain also sucks. Any attempt at being somewhat presentable seems futile in the face of a downpour. Even the slightest drizzle can have disastrous consequences to one’s outfit (and hair). And with spring nearly here, and thus the potential for more showers, resembling a wet dog is an increasing possibility.

So what does one do when faced with such a dilemma? Give up? As tempting as that sounds, you could always just wear … a rain jacket? Yes, it’s an item of clothing that doesn’t necessarily inspire the most excitement; it’s something you have to buy rather than something you want to buy. But rain jackets can be fun! In addition to the functionality they provide, they can add rather than detract from an outfit. If anything, rain jackets are becoming highly covetable items due in large part to their popularity among streetwear enthusiasts. They’re now officially cool.

Below we’ve rounded up ten of the best rain jackets/coats, and some rainwear adjacent outerwear like trenches, that’ll brighten up even the bleakest of days.

If the occasion really calls for looking well put together despite the rain, there’s no coat more suited for the occasion than this micro-checked trench from A.P.C. In fact, this coat is cause enough to make someone look forward to the rain, just so they have an excuse to wear it.

You can never go wrong with black, especially when it comes to an item of clothing that’s probably going to take a battering. It’s simple, yes, but sometimes that’s what’s best.

Even hypebeasts and skaters aren’t immune to the rain, so Only NY has crafted the solution to the dilemma with their transit shell jacket. The plum color is streetwear worthy, but you don’t have to skate to pull it off. Plus, whenever you need to make some extra room in your closet, you can just roll it up in stash it in its mesh bag.

With a name like American Trench, you’re going to expect some top notch trenches. Luckily, that’s just what American Trench does, and their Belted Trench is no exception. While still remaining classic, the silhouette has been ever so slightly updated from the traditional double breasted style.

White is a bold choice when it comes to outerwear, but we’re willing to take the risk for Penfield’s Halcott jacket. It’s an item of clothing you’ll be reaching for, rain or no rain. I mean, just look at that turquoise detailing.

Most rain jackets hit around hip length, which is nice and all, but it still leaves a lot of leg exposed to the elements. For those in want of a little extra coverage, Rains’ Track jacket extends beyond the hip. The color is different without being overwhelming or impractical for everyday use. What else would you expect from the Scandis?

The trench is generally spoken of as a wardrobe requirement, yet it always feels like an item of clothing people say they’re going to buy but never seem to get around to it. Now you have no excuse to procrastinate on purchasing the classic when this one is currently available from Uniqlo. It doesn’t get more trench-ier than this.