The cosmetic department head for Marvel television took the long road to success.

If Sarit Klein does her job just right, you’ll never notice her work, and she’s very proud of that.

“That’s something that makes me feel great,” says Klein. “I’m collaborating with a whole group of people to create something that, while viewers won’t specifically know what I’ve done, I’m sure they can sense that my work contributes, quite literally, to the big picture.”

The big picture that Klein is referring to is the Marvel television universe. For the past several years, Klein has served as the Makeup Department Head on Marvel’s The Defenders, Daredevil, Iron Fist, Jessica Jones, and Luke Cage. 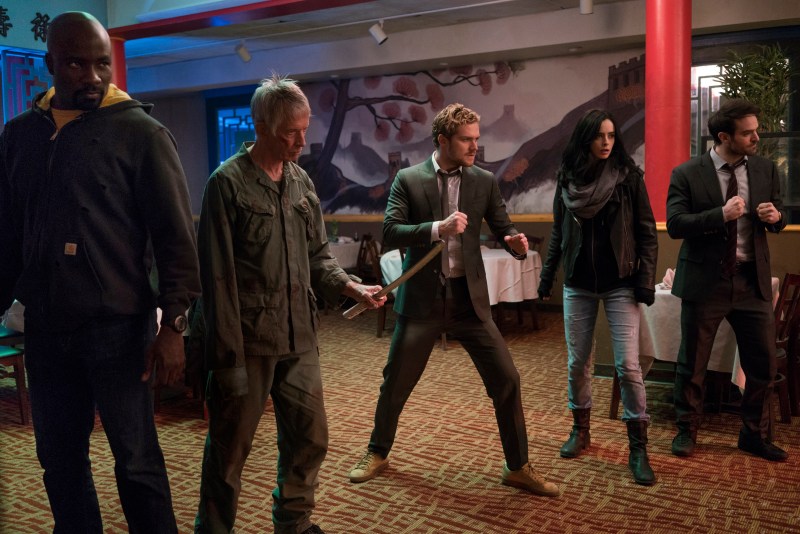 Klein’s route to her current role hasn’t exactly been a traditional one. An Israeli native, after she completed a required stint in the army, Klein was eager to take her business degree and get to work. But, on a whim, she took a makeup course.“I’ve always loved painting and drawing and I was one of those little girls who played with my mom’s makeup growing up, but I really just took the course for fun,” says Klein. “I absolutely fell in love with doing makeup but it never crossed my mind that this was something I could do for a living.”

Once she decided to commit to making her passion her career, Klein took a leap of faith and moved to New York. After working in print, she quickly moved on to design makeup for independent movies and television shows.

Explaining her process, Klein says, “The very first thing I do when I get a script is just read it through to get the storyline and get my creative juices flowing. Then I break it down, looking closely at the characters. Next, the [production team] gathers for a tone meeting and that discussion really helps me to formulate how I’m going to approach each character.”

Collaboration is a huge part of her job, says Klein. “My department makes a lot of notes and we go back and forth with the showrunners and the network until we’re all in agreement about what everyone is doing. This is when we get into the character development phase. We get one or two scripts so we know how the character is evolving then I know when to start my thought process regarding anything interesting or unusual, like wounds or things like that.”

A lot of the decisions Klein, her team, and her co-workers make are based on each character’s journey, which is always unique. “For instance, in the first season of Luke Cage, he was ill and that illness kept getting worse, so I had to create progressive levels of that look,” explains Klein.

Speaking of one her most challenging characters, Klein says that often the decision of whether or not to use prosthetics factors into the creative process. “For [Marvel Villain] Madam Gao, we needed a certain level of aging and at first we thought we might use prosthetics to accomplish that, but ultimately, after a lot of testing, we came up with a latex process that works well for that character,” said Klein.

And, Klein insists, it’s not just the behind-the-scenes team that has a say about the make-up process for the characters. “We also work very closely with the actors. We want them to be comfortable with what we’re doing.”

Changing technology has affected Klein’s process as well, she says. “With the addition of High Definition, we’ve noticed that all the colors pop out more and we’ve actually had to tone down some lip and cheek colors. And, we have to really blend well on the face and neck so there are no harsh lines. It’s very different from make-up during times like the ‘80s. Watch something from that time period and you know what I’m talking about.”

While viewers might think that getting made-up is just for the ladies, Klein says this isn’t really true. “In general, guys do need something, but usually with them, less is more. We obviously don’t want a full face of make-up but we often take corrective measures to cover things like blemishes, so there is a process for them too.”

For both men and women in general, Klein says that “prepping your skin is as important as what you put on your face in the form of makeup. Then you use less makeup because your skin is in better shape. You don’t need anything big but you do need to take care of your skin – especially with all the pollutants in the air and the food we’re eating. And, hydrate, hydrate, hydrate. A lot of people just don’t drink enough water.”

She goes on to say, “Women should really remember to take off your makeup at the end of the day. It’s a must do. At night is when your skin rejuvenates. You can see a difference in the morning.”

For the guys, Klein advises, “I try to teach men the 101 of skin maintenance. They think, ‘oh, that’s so feminine’ or ‘I don’t need that,’ but they do need to at least moisturize. Just do that and you’ll see a difference.”

As Klein has settled into her career, she’s been a bit surprised by a few things, mostly that, “The talent that I work with that are all very humble and appreciative. When I got the opportunity to work with Sigourney Weaver on The Defenders, she was delightful and grateful for everything. It was shocking to me, in a good way, that these actors who’ve been working for years have no ego.”

Klein offers several points of advice for anyone wanting to enter the onscreen makeup field, saying, “For starters, you need to have some education. Talent is one thing but because the industry is always changing, with new products and new techniques every month, you need to have some education. I still take classes to this day because there is always room to grow. You have to be passionate about this to succeed because it’s not as glamorous as most people think – you could be doing a night shoot when it’s freezing or getting up super early to prep one show while you’re working on another during the day. Lastly, be appreciative of every job that you get. Even jobs that you might think are small. Stay humble and appreciative, because everyone is replaceable.”

As Klein toils to make her work unobtrusive to viewers, she admits that she herself tries not to scrutinize the efforts of other makeup artists. “Honestly, when I’m watching something I try to look at it as a whole. Sometimes the makeup does stand out to me, especially when there are really glaring errors. That takes me out of the story. I try to go with the flow but if something is off to me then I notice it.”

As she moves forward, Klein insists that she doesn’t have one ‘dream project’ in mind, saying, “Looking back every project has been a kind of dream project for me because I’ve gotten to collaborate with talented people and create memorable characters from scripts that tell amazing stories and lots of viewers have gotten to enjoy all of it. If I can just keep doing all of this, I’m good.”

Marvel’s The Defenders, Daredevil, Iron Fist, Jessica Jones, and Luke Cage are all available for streaming on Netflix.