How It Happened: Woods and Manning Defeat Mickelson and Brady in Charity Golf Match 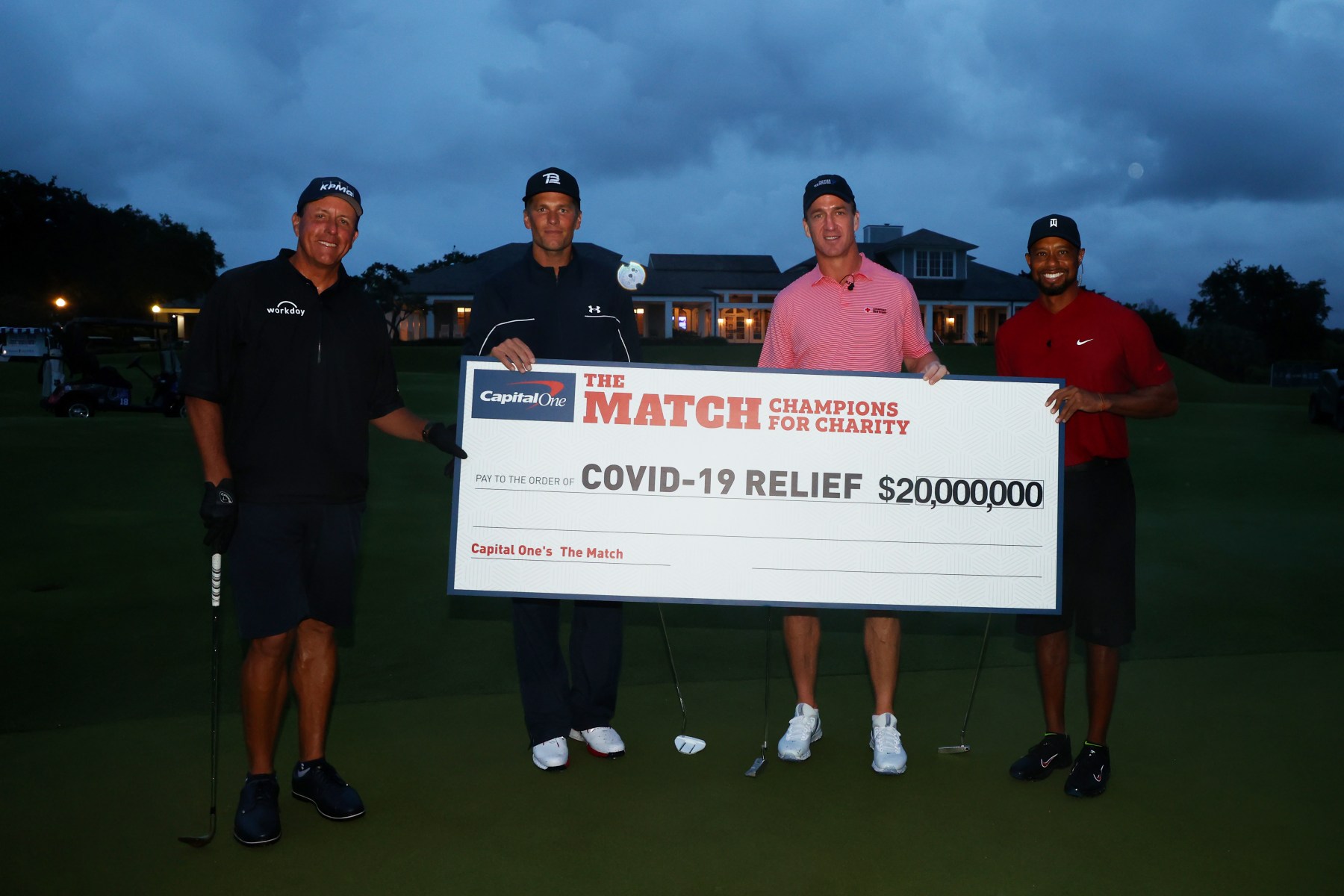 Tiger Woods and Peyton Manning celebrate defeating Phil Mickelson and Tom Brady during The Match: Champions For Charity on May 24, 2020.
Mike Ehrmann/Getty Images for The Match
By Luis Paez-Pumar / May 25, 2020 12:07 pm

While most sports still lay dormant due to the coronavirus pandemic, match-play golf has been having a bit of a moment over the last week. On May 17, Rory McIlroy beat Rickie Fowler in a skins matchup that donated $5 million to charity, but the main event was this Sunday. Tiger Woods teamed up with former NFL quarterback Peyton Manning to take on the team of Phil Mickelson and Tampa Bay Buccaneers QB Tom Brady (that still feels weird to say, doesn’t it?) at the Medalist Golf Cup in Hope Sound, Florida. Despite brutal weather and some poor play, the showdown was an entertaining diversion on a Sunday afternoon, and it raised a whole lot of money for charity in the process.

The format was simple: the front nine were played under best ball rules, with each team taking the best result from each hole, and Manning and Brady receiving a one-stroke handicap on holes no. 3, 6 and 8. The back nine, on the other hand, was played under a modified alternate-shot format, with teams taking the best tee shot and then alternating on the way to the green. After the full 18, which wrapped up after heavy rain and in near darkness, the team of Woods and Manning came out on top by a single hole after a good charge from Mickelson and Brady on the back nine.

After a few holes, the result might have been obvious. Brady might be one of the best quarterbacks of all time, but his golf game was lagging behind his NFL counterpart, and way behind the actual golfers. Brady was all over the place with his shots, particularly on the first six holes, leading to Charles Barkley taunting him on the TNT broadcast. He even split his pants at one point:

But Tom Brady is, after all, Tom Brady, and touched by some supernatural blend of talent and fortune, so of course he did this on the par-5 7th hole:

The commentators were as shocked as the viewers at home, and Brady took a moment to shut Barkley up in the immediate aftermath:

Quite hilariously, that shot — the best on the day by any of the golfers — didn’t even earn Brady’s team the win on the hole; Woods lipped out an eagle putt that would have won it, and both teams settled for birdie.

Speaking of Woods, it was bizarre seeing him playing in shorts after so many years in pants. He was on point on Sunday despite the wardrobe peculiarity, though, particularly from the tee:

Aside from Brady’s fairway hole-in and an 11th-hole eagle putt from beyond the fringe, the biggest surprise on the day was how good Peyton Manning is on the links. The former Colts and Broncos QB was nowhere near the quality of the two pro golfing legends, but aside from some early hiccups, he was a suitable partner for Woods, and definitely better than Brady was for Mickelson.

On the 16th hole, both Brady and Manning hit their iron tee shots closer than Woods, which was shocking in its own way. First, the new Bucs QB landed his shot to about 8 feet from the whole, which allowed Mickelson to scoop up the birdie. However, Manning hit his tee shot to under two feet, allowing for the Woods tap-in to keep the lead at one hole with two to play.

At the end of the day, it was Woods who won the event, though, securing his team’s victory with an incredible long-distance putt on 18 that gave Manning a tap-in for the victory:

With that, the event came to a close, and with Turner throwing in some cash to make it even, The Match raised an even $20 million for the All In Challenge, Direct Relief, the American Red Cross and the U.S. Chamber of Commerce Foundation. Not a bad way to spend a Sunday afternoon for four of the best athletes in history. Let’s just hope Brady logs some minutes on the driving range before they go out for a rematch.