Where Will the Warriors Stack Up in the NBA’s New Pantheon?

The dynasty may be over, but there's still a lot of talent in Oakland. Er, San Francisco. 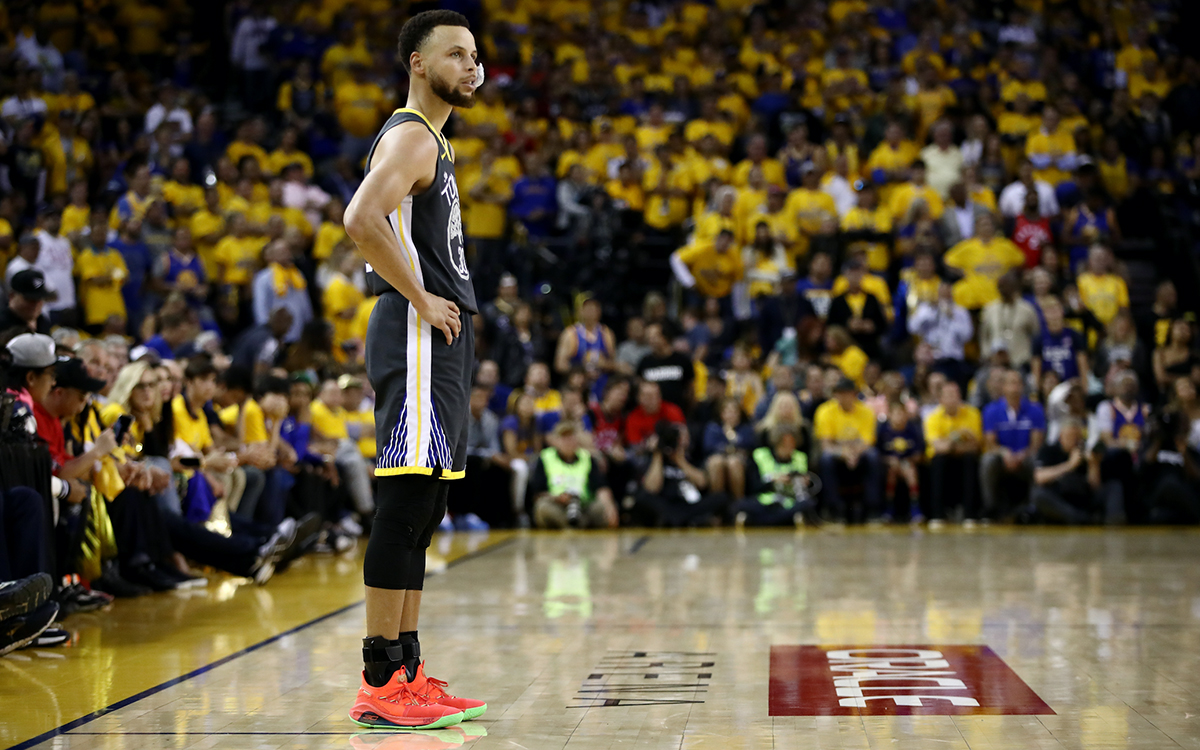 Five days ago, ESPN posted this graphic to Instagram:

A few takeaways from that image:

That’s right. No Steph Curry, no Klay Thompson, no Draymond Green. And while an Instagram post 11 months before the 2020 NBA Finals from a network that subsists on stirring the pot is exactly that, the exclusion of the Warriors here, across sports talk and even in Vegas (Caesars has the Warriors at sixth-best odds right now, with +1300) is indicative of an emerging truth: Nobody really thinks the Warriors can win it all next year.

It’s not difficult to see why. The Warriors just lost the Finals and their best player. Their third-best player had surgery to repair his torn ACL in late June, and was recently spotted hobbling around the flower section of a grocery store with a cane. Their one-year stopgap center, DeMarcus Cousins, signed a deal with the Lakers. And the team unceremoniously shipped out 2015 Finals MVP/resident glue guy Andre Iguodala to Memphis for picks, then waived Shaun Livingston, another cagey vet who once upon a time put up 20 points in a 2016 Finals game.

The nucleus from the Warriors teams that terrorized the league for five years is down to Steph, Klay and Draymond. Since Klay could be out until late January, the Warriors will be trying to win basketball games with Steph, Draymond and newcomer D’Angelo Russell. D-Lo energized the Nets last season, but will need to adapt his still-raw style of play and spotty shooting to the Warriors three-and-D, transition-oriented offense. (Even then, his destiny with the Warriors might just be a few months of supplemental scoring before Klay comes back and he’s flipped at the winner trade deadline.)

Earlier this week, Steph addressed the Warriors’s recent woes in an interview with ESPN, saying: “I’m excited, to be honest with you. Five straight years in the Finals and we’ve accomplished a lot, and three championships. There’s a lot to be proud of. But everybody wants a new challenge in terms of how do you get back to that level.”

It’s going to be one hell of a challenge. Welcome to the era of the NBA duo. Consider the high-octane duos this offseason has already created:

Three of those duos are in the Western Conference and will be dangerous immediately. Points can be made over supporting casts, benches, coaching, front office, trade deadline moves, injury risks and a whole lot more, but the Warriors will need competence and luck in those areas too. Golden State’s performance against Kawhi’s Raptors already exposed some serious holes in the franchise’s championship window. Fatigue comes to mind: the team has played dozens of games more than the majority of the league each season for half a decade, and the critical injuries that took Durant and Thompson out of the Finals read somewhat inevitable in hindsight given the context.

Until Klay comes back (assuming he does so at 100%), the Warriors will offer Steph Curry and Draymond Green as their response to those illustrious duos above. It’s good — Steph is the greatest shooter in the history of the league; Draymond packs the stat sheet in silly, never-seen ways — but it’s not enough. Steph’s single greatest asset may be his “gravity”: that is, the way that his range forces teams to pick him up at halfcourt, thus creating space for players like Klay, Iguodala and Livingston to find mismatches and open shots. We won’t even bother pointing out the magnitude of losing Durant. Steph is now the oldest player on that roster, at 31 years old, and might find this year — the first that the Warriors will leave the confines of Oracle behind for a shiny new stadium in Mission Bay — his most trying since he arrived out of Davidson.

And that’s before you get to teams like the Denver Nuggets, Utah Jazz, Milwaukee Bucks and Philadelphia 76ers, squads that might not have added a superstar free agent but will be very much in the mix next season. Some might argue that the Warriors have earned “Patriots clout” and Kerr and Curry will pull a rabbit out of a hat the way Belichick and Brady always seem to. But the NBA is a far more dynamic league, one where great players can upend great systems (seriously, at this point Kawhi might as well be the frontrunner for Executive of the Year), and the league doesn’t even resemble itself from a month ago. For years GM’s said they were waiting out the Warriors before they’d make a move. This summer is what they were waiting for. The moves have most definitely been made.

It puts into perspective everything Golden State has accomplished. There will always be gripes about Durant joining that franchise, but the Warriors still broke the single season wins record without him. It was an organically assembled team, one that only had one instrumental acquisition (Iguodala) before Durant came along. The franchise revolutionized the way teams are assembled and the way they play, and we got to sit there and watch all of it: their 2015 rise as unexpected darlings, the way they pushed LeBron to the greatest individual Finals performance of all time, the methodical way they wrapped up the 2017 and 2018 postseasons, and the manner in which they fought to the last whistle despite maxed-out adversity this past June. It was a wild ride, as charmed as they come in professional sports, and no matter what happens next, what came before is definitively over. They will not sniff 70 wins again. They will not be a commanding one-seed, nor cruise their way to the Finals.

But that’s a good thing. Why didn’t ESPN include Steph Curry in that Instagram graphic? Because he’s probably been in half of their NBA-related posts over the last five years. Basketball fans are ready for something new. Let the scramble for the throne begin.