The biggest stories to emerge from football this week, and whether we’re buying or selling on ’em

Myles Garrett pumps up the crowd against the Indianapolis Colts at FirstEnergy Stadium.
Getty Images
By Evan Bleier @itishowitis

Following Monday night’s matchup between the Chargers and Saints, Week 5 of the 2020 NFL season is almost over (the Bills are taking on the Titans tonight … we hope). While we can’t get to everything — like the Falcons finally firing head coach Dan Quinn — here are four of the top storylines to emerge from Week 5, and whether we’re buying or selling on ’em.

Though quarterback Baker Mayfield is the face of the franchise, defensive end Myles Garrett has been Cleveland’s MVP thus far this season and is the biggest reason why the Browns, at 4-1, are off to their best start since 1994, when Bill Belichick was coaching the team.

In Cleveland’s 32-23 over the Colts on Sunday, Garrett made a game-changing play by hitting Indianapolis quarterback Philip Rivers in his own end zone and forcing him to throw the ball away for an intentional grounding penalty that resulted in a safety.

The fourth-quarter play gave the Browns a nine-point lead and erased the momentum the Colts, who had closed to 27-20 in the third quarter, had been building in the game.

Big plays have become routine for Garrett, who had his strip-sack streak ended at three games in the win but finished with four tackles, one sack and four quarterback hits against Indy.

“He’s a game-changer,” Mayfield said of Garrett after the win. “We are extremely lucky and happy to have him on our team. He continues to do that week in and week out in big moments and make those big plays.”

While there’s no way he will ever win it, especially with how well Russell Wilson has been playing this season for the Seahawks, the MVP award should be in play for Garrett if he continues to make big plays down the stretch this season for the Browns. Through five weeks of play this seaosn, Garrett has created eight turnovers off his pressures and sacks, per CBS. That’s a stat that won’t show up on his résumé at the end of the season and thus won’t garner Garrett any MVP votes, but it should.

With two wins on the season, the Dallas Cowboys have won twice the number of games than any other team in the putrid NFC East and are somehow sitting in sole possession of first place at 2-3.

And though they lost star quarterback Dak Prescott for the year due to a grisly ankle injury that will require a lengthy recovery, expect the Cowboys to stay there.

The biggest reason for that is, as noted above, the NFC East is awful and the Giants, Eagles and Washington Football Team have combined to win two games, tie one and lose 12. Brutal, just brutal.

The second reason why the Cowboys still have first-place potential in spite of losing Prescott is the presence of backup QB Andy Dalton on the roster. Filling in after Prescott was injured in the third quarter of Sunday’s win over the Giants, Dalton completed 9-of-11 passes for 111 yards and helped guide the Cowboys down the field for a game-winning field goal.

Is Dalton’s ceiling as high as Prescott’s? Of course not. But he is a capable NFL quarterback who went 70-61-2 as a starter with the Bengals and took them to the playoffs four times.

A three-time Pro Bowler in his own right, Dalton also has a ton of weapons at his disposal in Dallas, including running back Ezekiel Elliott and wide receivers CeeDee Lamb, Amari Cooper and Michael Gallup. As long as he can avoid turning the ball over and taking sacks, Dalton is more than capable of leading a Dallas offensive unit that is stocked with talent and has scored more than 30 points in four out of five games this season.

Also working in Dalton’s favor is the fact that just three of the 11 games that are left on the Cowboys’ schedule come against teams that currently have a winning record. Given that, it seems realistic that Dalton can quarterback the Cowboys to at least six more wins and get the team to 8-8 or better on the season. In the 2020 version of the NFC East, that should be enough for first place.

Buy: Despite the loss, the return of Alex Smith is a win for Washington

It came in a 30-10 loss to the Los Angeles Rams, but the Washington Football Team finally generated a bit of positive news on Sunday.

After starter Kyle Allen was knocked out of the game with an arm injury, veteran quarterback Alex Smith took the field for the first time since he suffered a brutal leg injury that required 17 surgeries and nearly cost him his life. 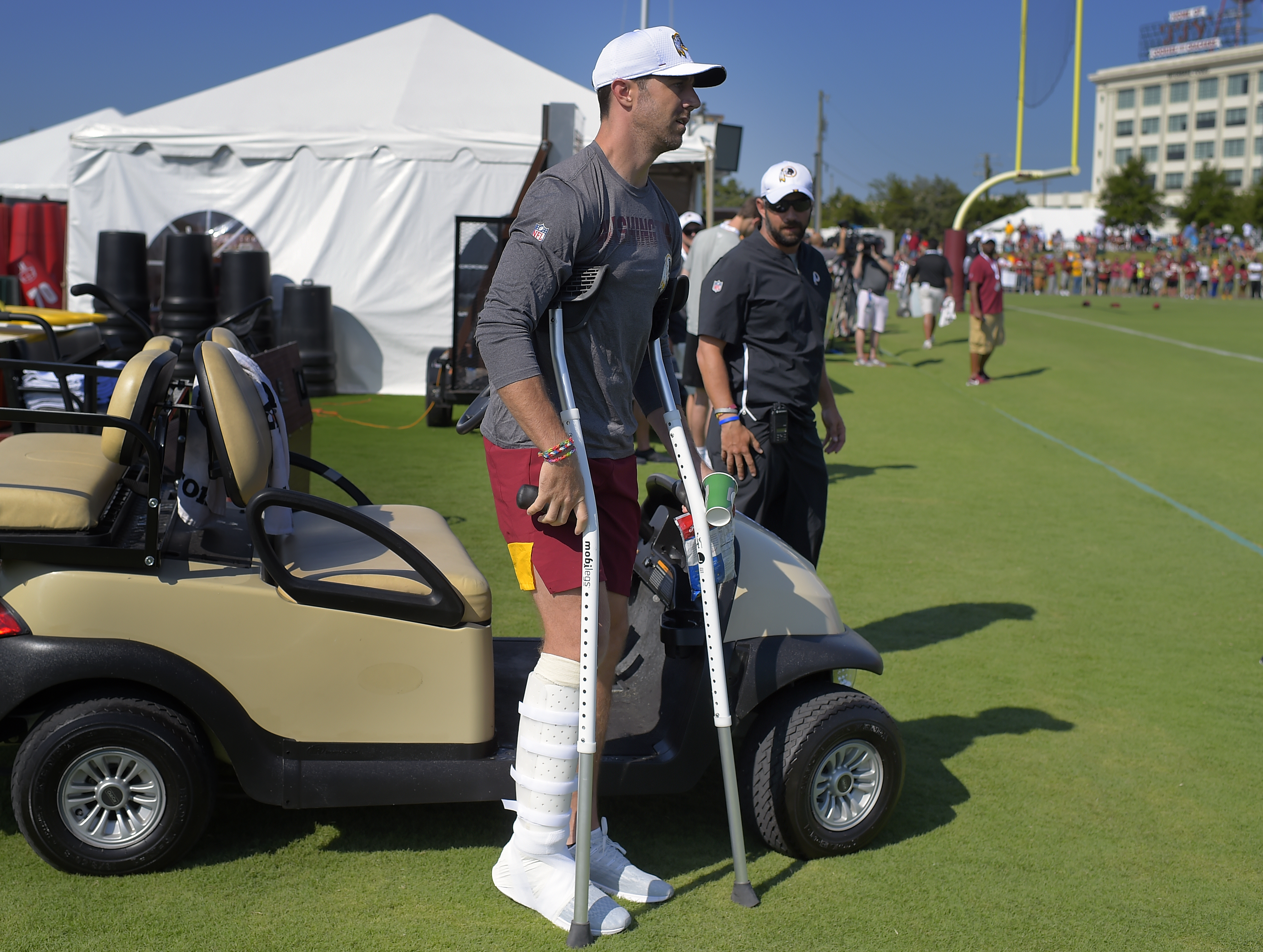 Filling in for Allen, Smith was sacked six times and completed just 9-of-17 passes for 37 yards. But he made it through the game without getting hurt, and could be the starting quarterback for Washington moving forward if Allen faces an extended stay in the training room.

Smith, who played NFL football for the first time in 693 days on Sunday, could have simply walked away from the game when he was hurt in November of 2018 and continued to collect a paycheck. But he didn’t, instead choosing to endure a grueling rehab process in the hope of making a comeback.

“It was great to be out there, the feeling, the range of emotions, the good and the bad,” Smith said after the game. “It’s why I fought so hard to come back. Sometimes you can take it for granted. Certainly to be away from it for a couple years, I’ve missed it.”

Given what Smith had to go through to get back on the field, it seems safe to take him at his word. He may not win another game in the NFL, but Smith proved on Sunday he still has the makeup of a winning player. Great story out of Washington, for once.

Sell: Daniel Jones is the future at QB for the New York Giants

The sixth overall pick in the 2019 NFL draft, Daniel Jones was taken to step in as the starting quarterback for the New York Giants following the imminent retirement of Eli Manning. Forced into duty earlier than expected last season after Manning was benched due to ineffectiveness, Jones went just 3-9 as a starter during his rookie year but showed flashes of being the type of player the team could build around.

This year, those flashes have been nearly non-existent. Jones has led the Giants to an 0-5 record during his sophomore season and looked very shaky doing it. He’s had at least one turnover in every game and on Sunday was strip-sacked by the Cowboys for a touchdown in a game the Giants only lost by three points. Take those six points off the board for Dallas, and New York wins by three.

In addition to turnovers, touchdowns have been an issue for Jones — namely, the lack of them. After passing for at least one touchdown in every single one of his starts last season, Jones has gone four straight games without throwing a TD and has just two scores on the season, both coming in Week 1.

Now 3-14 as a a starting quarterback in the NFL (more than a season’s worth of games), Jones is not shaping up to be the kind of player the Giants thought they were getting when they selected him out of Duke in the first round. But the 23-year-old has an excellent opportunity to turn his young career around, as five of New York’s final 11 games are against teams in the aforementioned NFC Least. None of those teams are above .500, and all of them should be beatable, even with the Giants’ mediocre roster.

Good quarterbacks find a way to beat bad teams. Bad ones find a way to lose to to ’em. If Jones is the former, it’s time for him to start proving it. We’re betting he won’t, and the Giants will be looking to draft another quarterback in 2021.