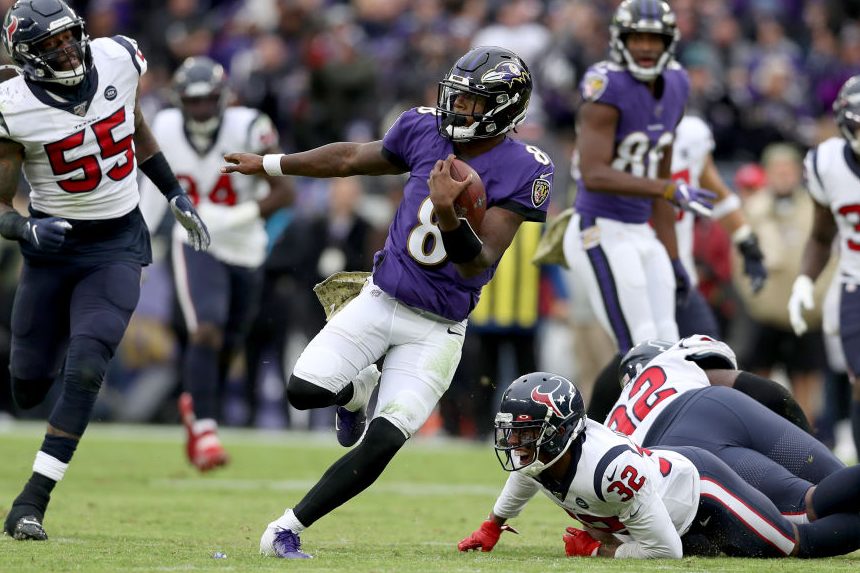 Lamar Jackson rushes for a first down against the Houston Texans. (Rob Carr/Getty Images)
Getty Images
By Evan Bleier / November 19, 2019 6:00 am

With the Chiefs knocking off the Chargers 24-17 in Mexico City on Monday Night Football, Week 11 of the NFL season is in the books and ready for review. While we can’t get to everything — like Mitchell Trubisky getting benched and Rob Gronkowski’s big announcement — here are five of the top storylines to emerge from the football week that was, and whether we’re buying or selling on ’em.

Buy: Lamar Jackson is going to win the MVP award

Winners of six in a row, the Baltimore Ravens have outscored their last three opponents by a combined margin of 127-40, averaging more than 42 points scored in the process.

One of those opponents was the pathetic Bengals (more on them later), but the other two were the Patriots and Texans, both first-place teams in their respective divisions at the time the games took place.

There was a time when the catalyst for Baltimore’s offensive explosion, dual-threat quarterback Lamar Jackson, could have been viewed as somewhat of a fluke, but that time has passed. In Sunday’s win over the Texans, Jackson completed 17-of-24 passes for 222 yards and four touchdowns, adding nine rushing attempts for an additional 86 yards.

During this torrid three-game stretch, Jackson has accounted for 11 touchdowns and no interceptions, only taking a pair of sacks.

With six games left in the regular season, Jackson has already rushed for 788 yards, good for seventh on the all-time list for a quarterback in a single season. Averaging 78.8 yards on the ground per game, Jackson is on pace for 1,260 on the season, which would easily break Michael Vick’s single-season record of 1,039 yards.

As impressive as his ground game has been, Jackson’s passing — which many believed was his weakness — has emerged as a strength. He’s thrown 19 touchdowns compared to just five picks and has a passer rating of 106.3, good enough for fourth in the NFL.

Jackson has tough tests in Baltimore’s next three games with matchups against the dominant defenses of the Rams, 49ers and Bills, but if he passes those with flying colors, his case for MVP will be tough to argue against.

Sell: There’s a sadder team in the NFL than the Bengals

Cincinnati may not be the worst franchise in the NFL thanks to the presence of the poorly named Washington football team and owner Daniel Snyder, but the Bengals are probably the saddest organization in the league.

The only team without a win in the NFL, the Bengals season-long slump continued on Sunday with a 17-10 loss to the Raiders in Oakland that offered little reason for optimism. Rookie quarterback Ryan Finley, who replaced veteran starter Andy Dalton following Cincinnati’s bye week, was not sharp in the loss, completing just 13-of-31 passes, taking five sacks and tossing an interception.

With Sunday’s loss, the Bengals were officially eliminated from playoff contention, the earliest that’s happened in a season in nearly two decades.

Now 0-10, the team may as well pack it in and make sure they lose the rest of their games so they can draft a quarterback. If that means telling their best player A.J. Green, who hasn’t played since being injured in the first practice of training camp, to stay on the sidelines, so be it. Getting the No. 1 pick and the hope that comes with it is the only positive thing that could come out of this season for the Bengals. Who cares if they go winless doing it?

Buy: Tom Brady should be concerned about his offense

After knocking off the Eagles 17-10 in Philadelphia in a Super Bowl rematch, Tom Brady took to the podium to address the media following the win.

Brady, who should have been happy to get a tough win on the road, spoke for less than two minutes and was visibly upset about the game he’d just played. “Up and down. That’s what it looks like to me,” he said of his team’s offense. “We could probably do everything better.”

He’s certainly got a point.

Sunday’s game was the third time this season that Brady failed to record a touchdown pass and was the first time in Brady’s 20-year career that he played from start to finish and didn’t lead the Patriots in touchdown passes, according to ESPN’s Stats & Information. (Julian Edelman threw a TD on a trick play.)

Though Brady impressively completed at least one pass to 10 different receivers on Sunday, the Patriots only managed 216 yards of passing offense and failed to score 20 points for the second time this season. Brady also seemed hesitant to consistently throw to inexperienced targets like first-year Patriots N’Keal Harry, Jakobi Meyers and Matt LaCosse, instead forcing the ball into the hands of familiar targets like Edelman and James White.

Unfortunately for Brady, Antonio Brown isn’t coming back, Josh Gordon is playing for the Seahawks and, barring a miracle, Rob Gronkowski, to borrow a phrase from former Celtics coach Rick Pitino, is not walking through that door.

Throughout his career, Brady has been credited as being able to do more with less. It won’t be easy, but if the Patriots are going to have a shot at repeating as Super Bowl champs, he’s going to have to do it again. Hopefully the frustration Brady expressed after the game is because he knows it’s going to be difficult — not because he realizes that at age 42, he can no longer do it.

Sell: Coach Dan Quinn has saved his job in Atlanta

After starting the season at 1-7, the Atlanta Falcons find themselves on a two-game winning streak after victories over the New Orleans Saints (8-2) and struggling Carolina Panthers (5-5). The team, which had been abysmal defensively, has not allowed a touchdown over the past two games and collected 11 sacks along with four interceptions.

“We’ve had two great games in a row,” owner Arthur Blank told ESPN after Sunday’s 29-3 win over the Panthers. “I think the whole team has done a great job, players and coaches. We’ve got to keep it up.”

Even if they do, Blank would be wise to move on from coach Dan Quinn.

Quinn, by all accounts, is a good guy and players like him. But he’s also the coach who had multiple chances to put the Patriots away in Super Bowl LI after the Falcons took a 28-3 lead. Since then, the team has gone 10-6 and lost in the second round of the playoffs and finished 7-9, failing to qualify for the postseason. Even if the Falcons win out and go to 9-7, the odds of them making the playoffs are virtually nonexistent, meaning the team will have missed them in three of Quinn’s five seasons at the helm.

For a team that plays in a division with two mediocre teams (Tampa Bay and Carolina) and has some very expensive pieces in Matt Ryan, Julio Jones and Devonta Freeman, that’s not a result that Blank should accept, whether Quinn is a nice guy or not.

For a replacement, Blank might not have to look any further than Atlanta linebackers coach Jeff Ulbrich, the member of the team’s staff who has helped orchestrate the team’s defensive turnaround over the last two games.

Buy: Safety Jamal Adams has turned into a legitimate pass-rusher

Against Washington on Sunday, New York Jets safety Jamal Adams joined the small and illustrious list of defensive backs who have recorded three sacks in a game — Troy Polamalu, Lawyer Milloy and Rodney Harrison among them.

Adams, 24, now has six sacks in his past three games, more than he had in his first two NFL seasons combined (5.5). He also has set a single-season franchise record for defensive backs and is only two short of the NFL record (by former Arizona Cardinals safety Adrian Wilson in 2005).

At a position that normally puts a premium on defending passes, Adams has found success as a blitzer and the Jets, who’ve won two games for the first time this season, are reaping the benefits. With teams now forced to worry about Adams shooting in from the secondary, other Jets defenders have been finding success getting to the quarterback: New York has 16 sacks in the past three games, their most in a three-game span since 1981, according to ESPN.

“The picks are not coming my way, so I thought I’d do something different,” Adams, who only has two interceptions in his career, said after Sunday’s win.