The etiquette of compensating fill-in caddies has been called “a huge gray area.”

PLAYA DEL CARMEN, MEXICO - NOVEMBER 09: Matt Kuchar of the United States celebrates his birdie with his caddie on the 15th green during the second round of the Mayakoba Golf Classic at El Camaleon Mayakoba Golf Course on November 09, 2018 in Playa del Carmen, Mexico. (Photo by Rob Carr/Getty Images)
By Evan Bleier @itishowitis

Currently being tried in the court of public opinion, the facts of the case of American pro golfer Matt Kuchar vs. Mexican caddie David “El Tucan” Ortiz are as follows.

Prior to the Mayakoba Golf Classic in November, Kuchar agreed to pay Ortiz (who is not the golfer’s regular caddie) $3,000 plus an unspecified amount of his winnings for caddying during the tournament, Ortiz told Golf.com.

Kuchar, who has earned more than $45 million as a professional golfer in purses alone, went on to win the tournament and take home a first-place check worth $1.296 million.

Following the win, Kuchar paid Ortiz $5,000. That amount was $2,000 more than the two had agreed upon but far, far less than the usual 10 percent bonus PGA Tour players typically give their regular caddies. Had Ortiz gotten the 10 percent tip, he would have taken home $130,000. 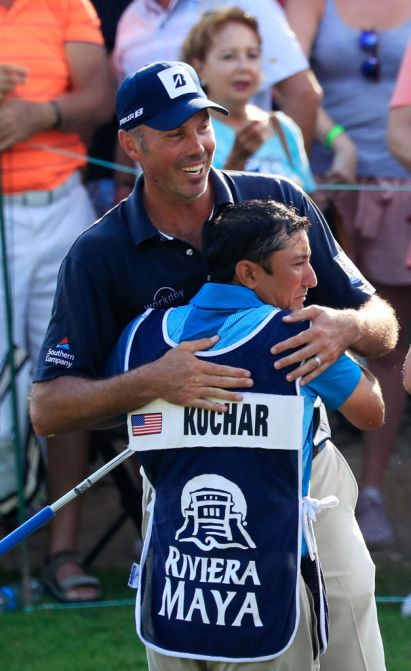 When news of the payout amount leaked out this week, Kuchar defended himself. “I ended up paying him $5,000 and I thought that was more than what we agreed upon,” Kuchar said. “I feel like I was fair and good. You can’t make everybody happy. So I certainly don’t lose sleep over this. This is something that I’m quite happy with, and I was really happy for him to have a great week and make a good sum of money. Making $5,000 is a great week.”

Though others have defended Kuchar’s terrible tip because he technically honored the deal he had with Ortiz, a deeper dig into the standard etiquette of caddie tipping – even for fill-in loopers – does not paint him in the best light.

A source with inside knowledge on the caddying industry, speaking on the condition of anonymity, said the circumstances surrounding the situation are “a huge gray area.”

“Temporary caddies aren’t of the norm,” the source told RealClearLife. “Normally the player has a standing deal with his regular or another professional caddie that requires percentage payments escalating with a higher finish – about 10 percent for a win. But Matt had a local caddie, one-weeker with whom he made a pre-tournament deal. I’m certain there was no discussion about if he wins or finishes really high, does the dynamic change? Maybe there should have been, but the caddie doesn’t speak much English and may have just gone with the flow.”

Still, though he went with the flow after the tourney and took the $5,000, Ortiz clearly changed his mind and let the news of Kuchar’s low payout become public.

“All this being said, the crux of it is the player made $1.2 million and the caddie $5K. In just about every case, the player looks bad,” according to RCL’s source.

In an appearance on the Zolak & Bertrand program on 98.5 The Sports Hub, former pro golfer Scott Hawley shared similar sentiments. 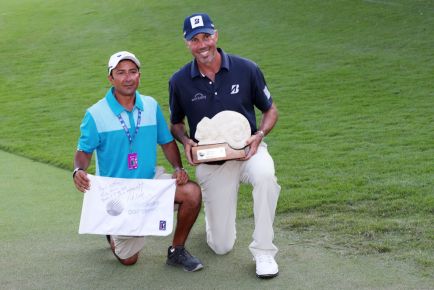 Hawley – who played with Kuchar on the PGA Tour and hit the links down in Mexico on at least eight occasions for a month at a time as a pro – said caddies in Mexico often don’t come from much (e.g. cinder-block homes) and are generally just trying to feed their families.

“Paying caddies in Mexico is a whole thing,” Hawley told the program. “Mexican caddies get a low rate. They were getting probably $20 a day at the places I was at. When we came into town on the Tour, the question was do you pay them based on what they’re used to or what you’re used to? Most players would pay based on what they were used to, tour average.”

Hawley also caddied on the LPGA tour for four weeks and said he would get $1,000 plus whatever extra came his way courtesy of the “10, seven, five.”

And, according to Hawley, that’s the going rate even for fill-in caddies.

“For Kuchar to go with the .0038, that is unreal,” he said. “There may be a little discretion [with fill-ins] when the numbers are big, but a 10, seven, five is a pretty standard deal. As good of a player as I was, I had never caddied before the LPGA Tour and I still got the 10, seven, five. There’s no question $5,000 is a good week for that guy, but then you have to ask yourself what you are basing that on to save a buck. You win a tournament, you win a million dollars, take care of the guy. This would have been life-changing for that guy. He earned it.”

In Kuchar’s defense, Hawley – who played 36 holes with him at a U.S. Open sectional – did say the 40-year-old was a likable guy. 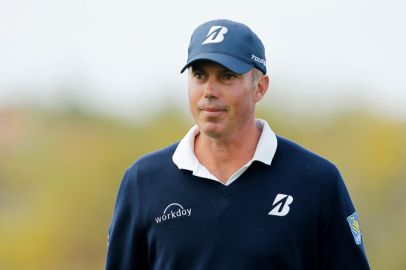 SCOTTSDALE, ARIZONA – FEBRUARY 02: Matt Kuchar looks on from the 14th green during the third round of the Waste Management Phoenix Open at TPC Scottsdale on February 02, 2019 in Scottsdale, Arizona. (Photo by Michael Reaves/Getty Images)
Getty Images

“It’s pretty easy to find the Shooter McGavins about two holes in, the ones who don’t like dogs and don’t like women or old people. He was the opposite. He was great with the fans for 36 holes. Very nice, very down to earth. I just left thinking, ‘great dude.’ Nothing would indicate … this $5,000 thing is interesting. I’m sure he has paid 10 percent to caddies in the past.”

But, he didn’t fork over the 10 percent in this instance and that has certainly not paid off for Kuchar in the eyes of many.

In addition to negative reactions from members of the public both on social media and on the golf course, other pros, including Tom Gillis who competes on the PGA Tour Champions, have gone after Kuchar. “What would Jack or Arnie done in this situation???” Gillis wrote on Twitter. “Seized the opportunity to change a man’s life.”

And it doesn’t end there.

A GoFundMe account with a goal of raising the $50,000 has been set up on Ortiz’s behalf. The description of why the fund – which has raised $2,565 as of this writing – was created does not reflect well on Kuchar at all.

“THIS FUND IS IN NO WAY MEANT TO LET KUCHAR OFF THE HOOK ON PAYMENT** as of 1/30/19 $5k has been paid to El Tucan from Matt Kuchar- no matter if GoFundMe goal is reached or not our thoughts are Kuchar still owes!!!!,” according to the description. “The GoFundMe Money is an added bonus for El Tucan and an avenue to show how cheap a 50 million dollar PGA Tour player can be in an attempt to take advantage of a pro caddie in Mexico.”

Whether he was justified because they had a prior deal or not, it certainly seems like Kuchar’s choice to save some money at Ortiz’s expense in November is going to end up costing him in the long run.

UPDATE: How much it will cost him remains to be seen because, as of late Friday, Kuchar released a statement apologizing for his comments. He also said he will pay Ortiz an additional $45,000, bringing his total payout to $50,000.

He also has pledged a donation to the Mayakoba Classic charities.

“I made comments that were out of touch and insensitive…I read them again and cringed.” pic.twitter.com/3ChKyfxtgb

(The Association of Professional Tour Caddies and The Caddie Network did not respond to a request for comment from RealClearLife.)