How far can a team fall? We're finding out. 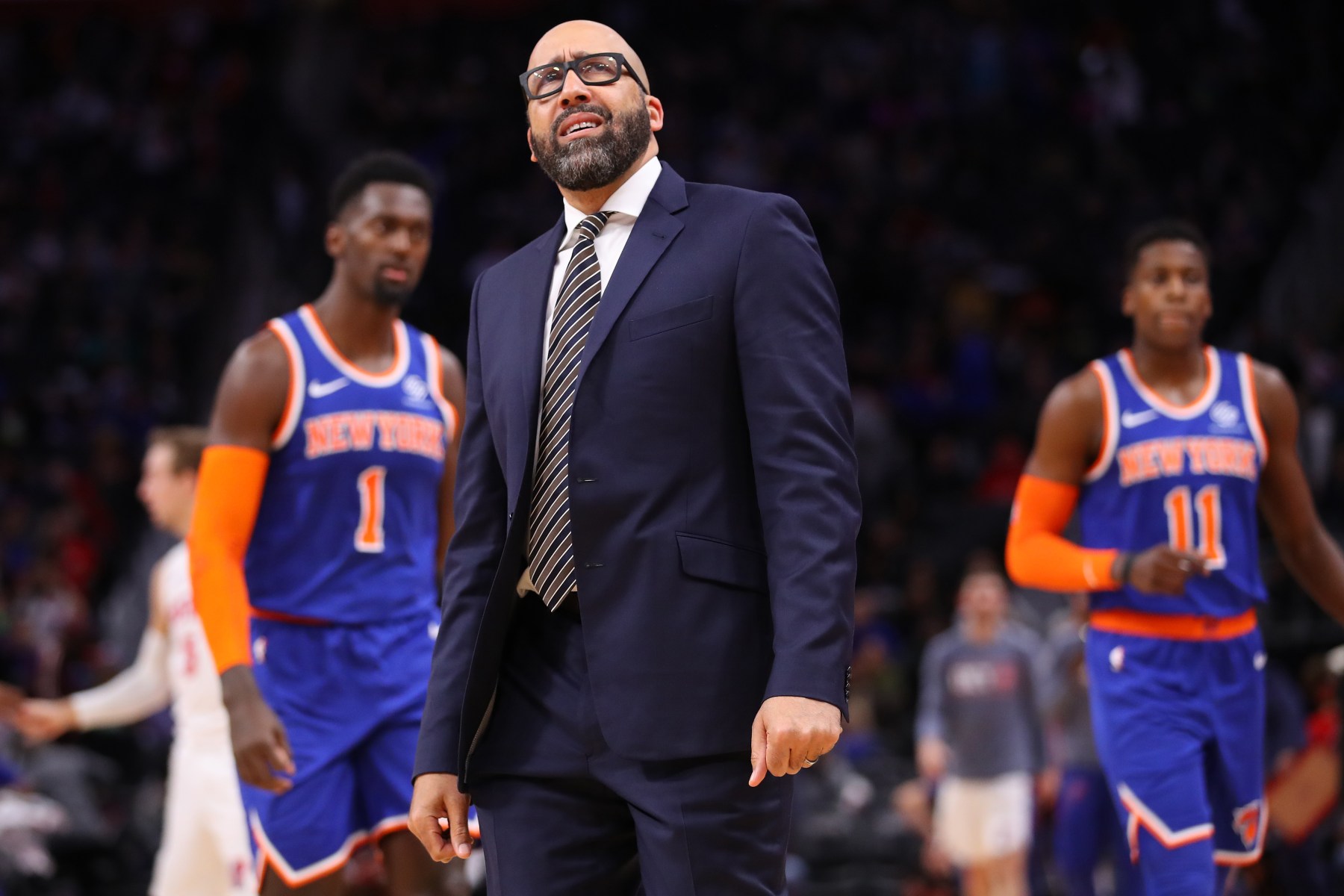 To be a New York Knicks fan, according to Friedrich Nietzsche, is to suffer. To continue to be a fan — hostage? chump? — is to find meaning in the funeral procession of Bargnanis and Afflalos and Shveds that stretches down 7th Avenue like the sea.

Since James Dolan took control of the team in the early 2000s, the New York Knicks have almost entirely languished in the NBA’s sub-basement. Merely losing was not enough; no, the Knicks approached team building with all the tact of an Ocean’s Eleven heist helmed by today’s Rudy Giuliani and Air Bud, drunkenly lurching from one hare-brained scheme to another in a desperate grasp at the fifth seed.

Save for the happy accident of a 54-win season in 2012-2013, Madison Square Garden has been host to terrible, inessential and yet intriguing teams. Armed with Carmelo Anthony (and, later, Kristaps Porzingis) and delusion, the Knicks occupied a fundamentally different phylum than contemporaries such as the Charlotte Hornets or the Minnesota Timberwolves who were content to soak in the quietude of bland mediocrity. Rather, they were a screeching Rube Goldberg machine of failure—an organization that could turn self-sabotage into high art. Jeremy Lin was given the heave-ho after a high-stakes game of hide and seek; Phil Jackson apathetically tried to vibe-check the team into contention with nothing more than a Co-Star account and a microdose; Andrea Bargnani was there. Still, these gambits were governed by a certain twisted strain of internal logic, albeit a logic whose closest corollary is buying more underwear every day forever because you’re too lazy to do laundry. Whereas other franchises built organically by drafting and developing young talent, the Knicks committed themselves to running down a dream. But still, for the most Stockholm Syndrome-afflicted fans, there was hope because even the most flagrant get-rich-quick scams sometimes involve getting rich.

This year, however, that hope is all but gone. Having shipped out Kristaps Porzingis only to be spurned by Kevin Durant and Kyrie Irving and just about every other player that your mother could name, the Knicks are regular-degular dreck. This fatberg bricolage of perennial 8th-men and ripening Zoomers has wheezed its way to a league-worst 2-9 start. Lame-duck coach David Fizdale, who has essentially already been fired, has failed to implement the pace-and-space style that he helped innovate as an assistant in Miami. Accordingly, the Knicks boast the lowest offensive rating in the NBA. The league’s best attacks either hum with clever play design or overwhelming individual talent; the Knicks fail on both counts. Bereft of players who can dribble consecutively without looking at the ball, the Knicks are almost entirely reliant on overstretched role players to conjure individual moments of inspiration. Here is Marcus Morris, determinedly jab-stepping like a Canal Street Melo. There is Julius Randle, chestily doinking layups and ignoring easy passes. Up next, is RJ Barrett, the former Dookie and only player in college basketball who could stop Zion Williamson last year, attempting to plow through a well-prepared tangle of defenders. And Bobby Portis needs to figure out what he does; he had all summer to think of it.

For once, the team has seemingly committed itself to normalcy, opting (read: having been forced) to build around a nucleus of young players and a raft of future draft picks rather than indulge their true reckless Knicks-ness. Although this is certainly a positive adjustment — Mitchell Robinson and RJ Barrett are legitimately good, Frank Ntilikina is maybe almost-good but definitely handsome — it is undercut by the fact that not only is the franchise still in the nascent stages of rebuilding, but that the “braintrust” of Scott Perry and Steve Mills refuses to admit they’re even rebuilding at all. Whether front office can admit it, the Knicks are at least a handful of seasons away from respectability. “We think the team is not performing to the level that we anticipated or we expected to perform at,” said team president Steve Mills during a bizarre press conference after the loss to the Cavs, insisting that this mangled rat king of a team is, in fact, good and not bad, “We believe in the plan Scott and I put together and the players that we assembled. But we also have to acknowledge that we haven’t played at the level we expected to play at.”

The Knicks’ institutional rot, though, is more significant than one soft- and smooth-brained billionaire: it is proof positive of how teams are held accountable in this era of player empowerment. Ever since Lebron took his talents to South Beach, the NBA’s superstar class has embraced a jet-setting lifestyle. Since last season, Anthony Davis, Kevin Durant, Kyrie Irving, Jimmy Butler, Kawhi Leonard and Paul George have succumbed to the respective siren calls of Brooklyn, Miami and Los Angeles. This new league order is undeniably bleak for provincial backwaters like, say, Oklahoma City, it has stacked the deck in favor of teams in major markets. To be fair, the Lakers have more or less succeeded in spite of themselves, but franchises like the Clippers and the Nets have consciously labored to make themselves appealing free-agent destinations by creating player-friendly cultures and aggressively investing in new facilities and technologies. Worse than being surpassed by their relatively fanless little brother in Brooklyn, the Knicks remain mired in their 20-year-long rut—with no real means to remedy it until Dolan sells the team. They are the incel of the NBA, shouting into the abyss that good players have cooties and we don’t want them anyway.

Beyond the quotidien misery of constant losing, this chronic uncoolness is perhaps the cruelest cut of all for Knicks fans. Wins and losses are ephemeral, but the infrastructure that scaffolds them is constant—it is no coincidence that the Knicks’ incompetence has persisted through the tenures of 12 different coaches and one same owner. Although it is undeniably grim to support a team that has firmly slid into obsolescence by the winter solstice, the real dejection of being a Knicks fan is the marrow-deep knowledge that it won’t get better any time soon. This isn’t an issue of the Knicks not playing hard, or not utilizing enough weak side action to occupy help defenders, or even not winning games; this is an issue of the Knicks being the Knicks. David Fizdale and Scott Perry and Steve Mills are all culpable, but the same could be said of all of their predecessors. The real blame lies under that hood.