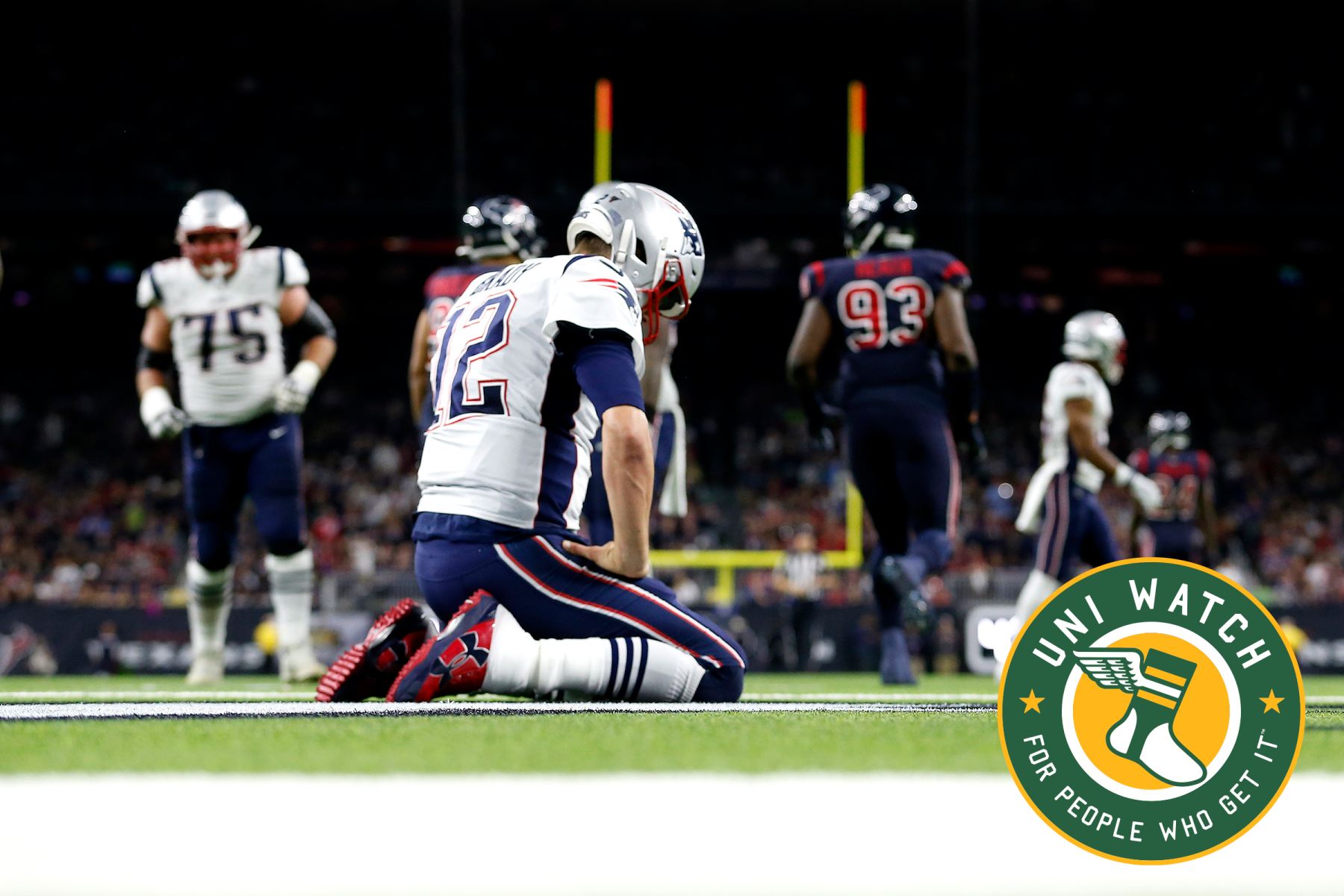 It's time for the Pats to turn toward a new, less Elvis-inflected future
Tim Warner/Getty
By Paul Lukas / February 27, 2020 7:08 am

For the past two decades, Paul Lukas been writing about sports uniforms, logos and field designs via Uni Watch, a column that has appeared on ESPN.com and Sports Illustrated as well as its own dedicated daily blog. Now he’s bringing his obsession — the aesthetics of athletics — to InsideHook.

The New England Patriots have been an indisputable NFL dynasty for two decades now, but changes are on the horizon. Quarterback Tom Brady, now 42, is coming off a mediocre season and facing an uncertain future. Coach Bill Belichick will turn 68 in April (only Seattle’s Pete Carroll is older among NFL coaches) and appears to have lost his Midas touch. So after a 20-year run of stability for their most important personnel, the Pats will soon be forced to bring in some new blood.

We think a new look would also be a good idea. The Pats’ current uniforms, which were introduced in 2000 (the same year Brady and Belichick joined the franchise), have not aged well and now look dated. So our latest design challenge for Uni Watch readers was to redesign them.

Okay, enough preliminaries. Here are the best and most interesting entries we received. For all of the images that follow, you can click on the design to see a larger version of it. Ready? Here we go.

Pat Patriot is widely considered one of the best mascot characters in sports history, so it’s not surprising that many of our contestants chose to incorporate him into their design concepts. Brad Wolf cleaned up some of Pat’s rough edges and made him part of a straightforward uniform that features American flag-themed sleeve striping — a simple but effective detail.

Instead of just rubber-stamping the original Pat Patriot, Gene Sanny decided to try something different. He came up with a new rendition of Pat, showing him in profile rather than head-on, and giving him a hint of Flying Elvis’s headwear. An excellent way to bring some new life into an old character — nicely done!

Best Design Based on a Logo You Weren’t Aware Of: Reece Crawford

Not many people realize this, but for the past 20 years the Pats have had an alternate “NE” logo. It’s rarely used (much like the Broncos’ full-horse logo), but it shows up every now and then on merchandise or in marketing campaigns. Reece Crawford elevated that logo to celebrity status by putting it on one side of his Pats helmet concept. And you know what? It doesn’t look bad up there! The rest of Crawford’s concept feels a bit overdesigned for your friendly uniform columnist’s tastes (that flag-based number font would be a major problem for most numerals other than 1, for example), but he’s definitely hit upon something by putting the overlooked “NE” logo on the helmet. Intriguing!

While we’re at it, Sean Flaherty tried putting a modified version of the “NE” logo on his helmet concept. Again, not bad at all.

Best Design Based on a Flag You Weren’t Aware Of: Tim Batzinger

Did you realize that New England has an unofficial but historically significant flag dating back to colonial days? It’s true! Tim Batzinger used that flag design — red with a pine tree graphic — as the basis for a very cool alternate uniform. (You can also see his home and road designs, which aren’t bad, although they’re not as interesting as the alternate.)

Several readers’ concepts used helmet or jersey-chest design motifs featuring a ring of 13 stars, symbolizing the original 13 American colonies. This is a familiar trope in the uniform world — the Philadelphia 76ers have done it on some of their jersey designs, for example. But Tom Bierbaum came up with the idea of using the star pattern on the TV numbers (the smaller uni numbers on the shoulders or sleeves, so named because they help TV spotters identify players who aren’t facing directly toward or away from the camera), and the star treatment looks really good in that context! A nice approach for an often overlooked uni element.

You can also see how the star motif looks on Bierbaum’s road and alternate uniform concepts, and here’s a closer look at the excellent mascot character he’s using as a sleeve logo.

With so many people using the same templates to submit their designs, it’s always a treat to see someone using a fresh approach. Tim Fesmire’s template probably wouldn’t be suitable for showing a design to a real-world client, but it’s a welcome change of pace for a retina-weary contest judge (and his uniform designs aren’t bad, either). Remember, kids, presentation counts!

Want to see more? You can see all of the entries we received here.

Paul Lukas will have his annual Uni Watch MLB Season Preview here on InsideHook next month. If you like this article, you’ll probably like his Uni Watch Blog, plus you can follow him on Twitter and Facebook. Want to learn about his Uni Watch Membership Program, check out his Uni Watch merchandise or just ask him a question? Contact him here.