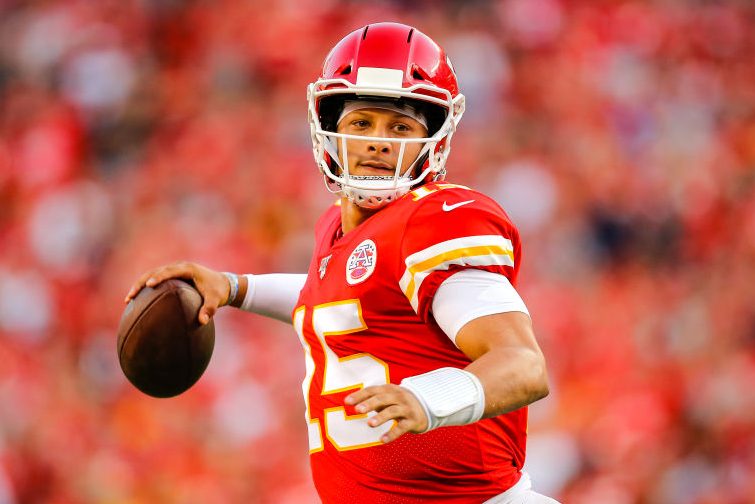 Patrick Mahomes of the Chiefs throws a preseason pass against the Bengals. (David Eulitt/Getty)
By Evan Bleier / August 26, 2019 6:05 am

Last season, Patrick Mahomes threw 50 touchdown passes compared to just 12 interceptions while leading the Kansas City Chiefs to a 12-4 record and a berth in the AFC Championship game.

The third-year quarterback’s 50 TDs left him five short of tying Peyton Manning’s single-season touchdown record and seven short of winning free ketchup for life from Heinz. While he’d likely have preferred to have a couple more touchdowns, the 23-year-old is probably fine with the lack of free Heinz as he signed on as an endorser of Hunt’s Ketchup last December.

In addition to putting Hunt’s on his steaks and macaroni and cheese, the Chiefs young quarterback also puts ketchup on the food that put Kansas City on the map: barbecue.

And there’s a big reason he did: Mahomes has a ketchup obsession that runs deep and he adores the sugary sauce the way Tom Brady loves gluten-free carbs, avocado ice cream and winning Super Bowls.

Clearly, it’s been working for him as Mahomes, odd ketchup habits and all, was named NFL MVP last season and figures to be one of the league’s biggest stars once again this season and for years to come.

InsideHook caught up with Mahomes to talk about losing to the Patriots in the AFC Championship, his fantasy football prospects for this season and one other ketchup-related concern.

Have confidence in drafting #15 in fantasy this season

“I hope that we can go out there and build on what we did last year. We have a lot of talented guys around me, so we have a good core group of guys. So, I’m going to go out there and just try to let the game come to me and try to get the ball to those skill players that can score touchdowns and hopefully keep scoring for me. The ultimate goal is to go there and win the Super Bowl, but we have to build every single day for that. I want to keep progressing as an offense and as a team.”

Losing the AFC Championship was a learning moment

This year’s game vs. the Pats is circled on the calendar

“You’re always looking forward to playing the best and they’re the Super Bowl champions. Whenever you’re an athlete, whenever you’re a competitor, you want to compete against the best. They’ve proven over what seems like two decades that they’re at the top of the league, so I’m excited to go up there and compete against them. Going into this next season, I mean, when you’re that close, you want to take that next step. So, I definitely have that motivation to find a way to get better each and every day, so that when I get that opportunity again this next year, then I’ll be able to find a way to win it.”

No Kareem Hunt. A rusty Tyreek Hill. No problem.

“I feel like the best thing about our team is whenever someone’s number is called, they step up and play well. I feel like the mentality we have in our locker room is that whenever your opportunity comes, you’re going to take advantage of that. We’re going to keep pushing. I feel like that’s something that has carried us to winning the AFC West last year. With the guys that are new and the guys that you’ve been working with, it’s important to make sure you’re on the exact same page no matter what the play is, no matter what situation you are in the game. So, I suppose that’s something I’ve always done, and I feel like it’s something we’ve always done as a team.”

“I think the biggest thing he is about is never letting a day go by for granted. I mean, that’s a big thing, man. You don’t want people to be satisfied with where they’re at. You want to make sure that you’re getting better each and every day, and that’s something that I really try to embrace, and then try to go out there with my best effort each and every day. The best thing about our OTAs is how competitive they were. When you have really good teams, they should be like that. It should be the offense winning some days and the defense winning some days. It should be a competition, every single play, every single rep, and I feel like we’ve done that. I’m excited to see what happens because of it.”

You learn from everything you do in this league, winning or losing.

Not starting his rookie season was actually a good thing

“I got to learn behind a guy like Alex [Smith]. He really is someone that taught me a lot of things about how to be a professional quarterback and how to have success building a blueprint of what you need to do each and every week in order to go out there and be able to make the game feel almost slower when you’re on the field. That’s something that I got to do by learning behind him. But, I think there are pros and cons to each one. So, I’m glad that I was maximizing the opportunity being behind Alex. I learned as much as I could from him. It helped me with the transition last year.”

The hot dog isn’t a sandwich. Neither is the hamburger.

“I don’t consider a hot dog a sandwich. I consider it as its own thing and I do put ketchup on my hot dog 100 percent of the time. Hamburgers are also their own thing. They go together in a separate category.”