Wide receiver Michael Floyd #15 of the Arizona Cardinals makes a 9-yard touchdown reception against cornerback Darryl Roberts #27 of the New York Jets in the fourth quarter during the NFL game at the University of Phoenix Stadium on October 17, 2016 in Glendale, Arizona. (Christian Petersen/Getty Images)
By Matthew Reitman 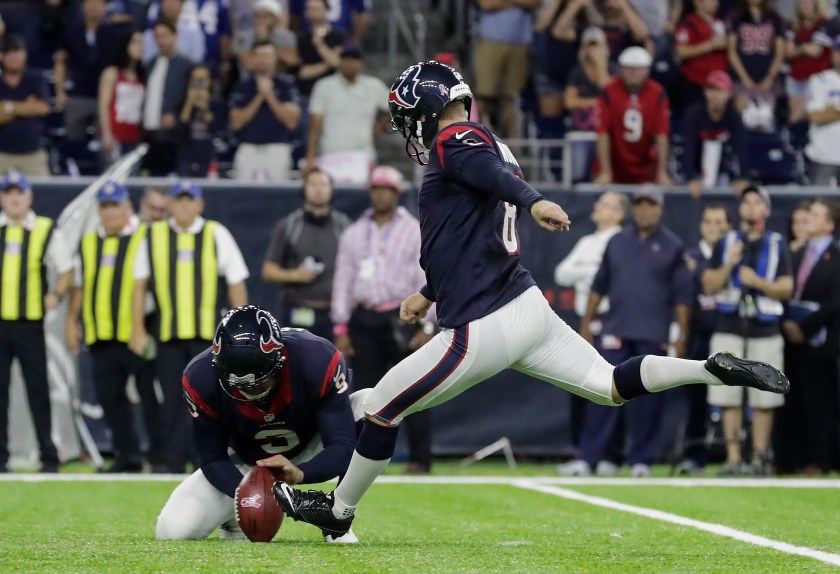 Nick Novak #8 of the Houston Texans attempts a field goal during against the Indianapolis Colts at NRG Stadium on October 16, 2016, in Houston, Texas. (Photo by Tim Warner/Getty Images)
Getty Images

Kicking off the week on Thursday, the Chargers fought off a comeback from the Broncos to beat Denver, 21-13. Sunday saw another loss for the Browns who, at 0-6, just can’t seem to catch a break. San Francisco watched Colin Kaepernick’s audition for Blaine Gabbert’s starting job at quarterback not go as well as it or its coach Chip Kelly might’ve hoped. Running back LeSean McCoy also showed his former coach from the Eagles what he was missing (with three TDs), when the 49ers were blown out by the Bills in the second half.

Given their talented rosters, Sunday delivered losses to four teams—the Steelers, Panthers, Packers, and Colts—that arguably had a leg up on their opponents. (Indianapolis fell to Houston on Sunday night in overtime on a 52-yard field goal by Nick Novak.) On the flip side, several teams—the Lions, Giants, Titans, Saints, and Jaguars—secured wins just before the playoffs slipped completely out of their grasp.
Monday night brought another crushing loss to the New York Jets (now 1-5) against the Arizona Cardinals. Running back David Johnson led the Cardinals to their win with 111 rushing yards and three touchdowns. Carson Palmer (213 passing yards, one touchdown) lit up his plethora of backfield options in John Brown, Larry Fitzgerald, Jaron Brown, Michael Floyd. Arizona’s defense picked off passes from two Jets quarterbacks Ryan Fitzpatrick (Geno Smith replaced starter Fitzpatrick in the fourth quarter). Ensuring the loss, New York’s running game was almost nonexistent with just 33 team rushing yards.
Week Seven kicks off in Green Bay with the Packers looking to get their confidence back against the Chicago Bears on Thursday night. Below, take a look at that aforementioned highlight reel. 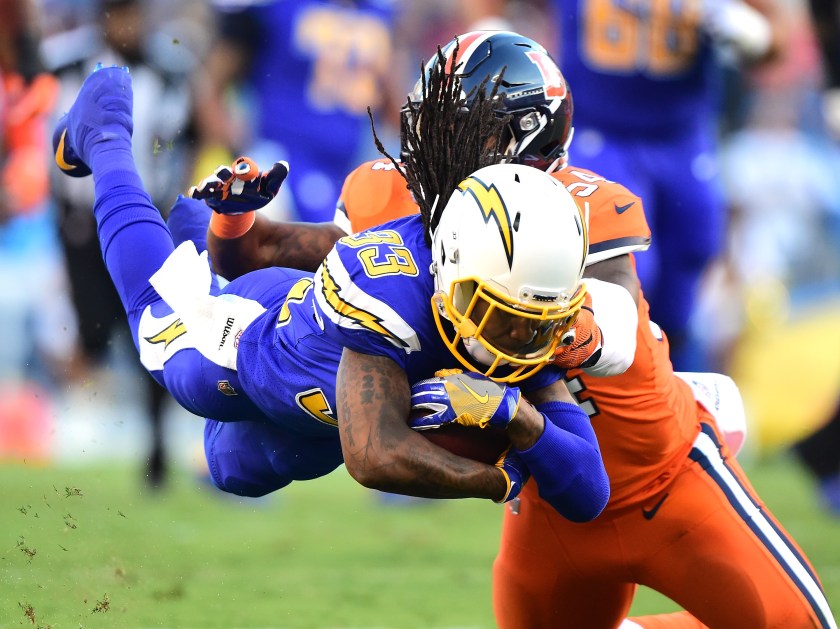 Dexter McCluster #33 of the San Diego Chargers dives with the ball as he is tackle by Brandon Marshall #54 of the Denver Broncos during the first quarter at Qualcomm Stadium on October 13, 2016, in San Diego, California. (Harry How/Getty Images)
Getty Images 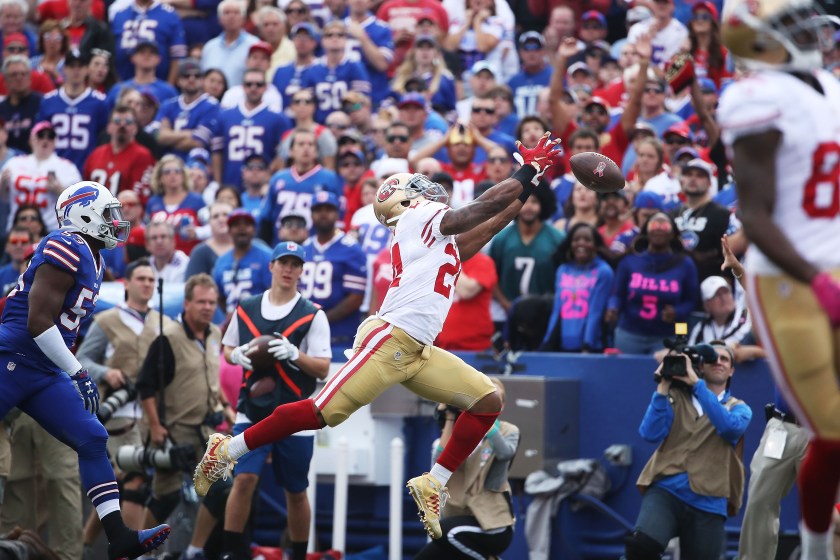 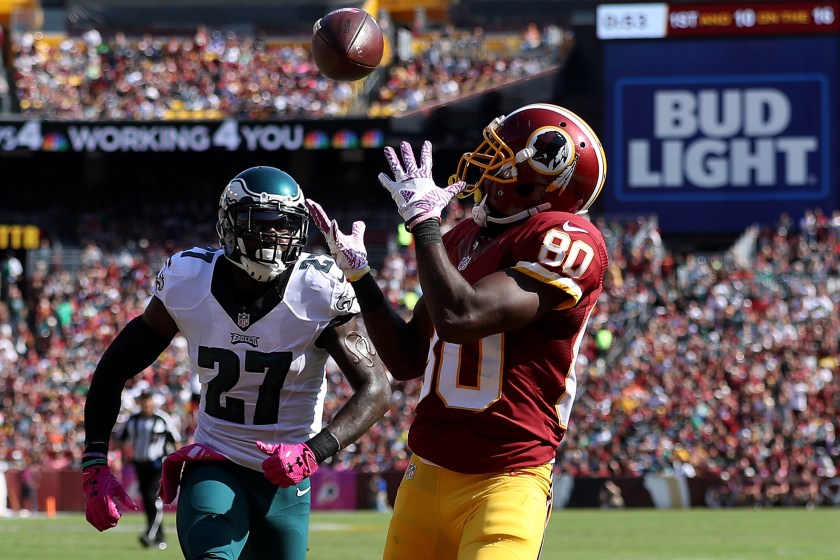 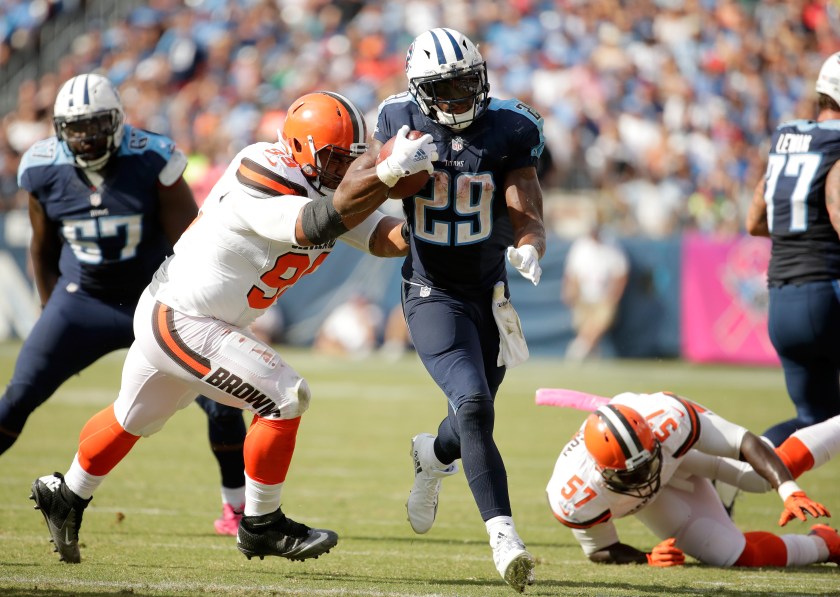 DeMarco Murray #29 of the Tennessee Titans runs with the ball during the game against the Cleveland Browns of the game at Nissan Stadium on October 16, 2016, in Nashville, Tennessee. (Andy Lyons/Getty Images)
Getty Images 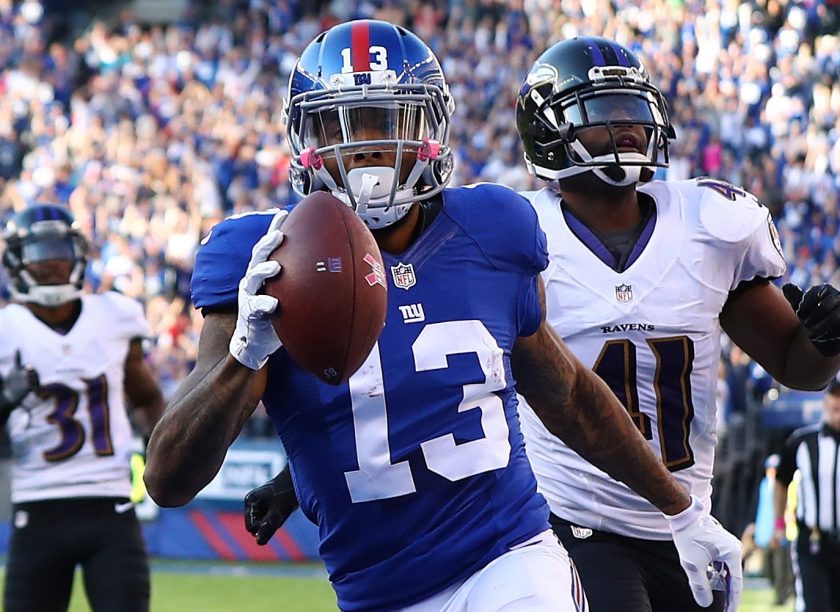 Odell Beckham #13 of the New York Giants scores the go ahead touchdown against the Baltimore Ravens in the fourth quarter with the Giants winning 27-23 during their game at MetLife Stadium on October 16, 2016, in East Rutherford, New Jersey. (Al Bello/Getty Images) 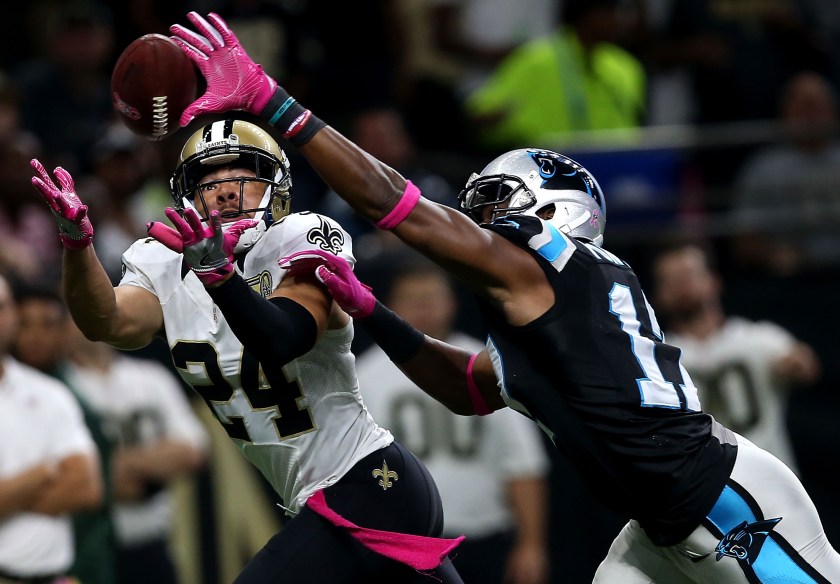 Sterling Moore #24 of the New Orleans Saints intercepts a pass over Devin Funchess #17 of the Carolina Panthers during the second quarter at the Mercedes-Benz Superdome on October 16, 2016, in New Orleans, Louisiana. (Sean Gardner/Getty Images)
Getty Images 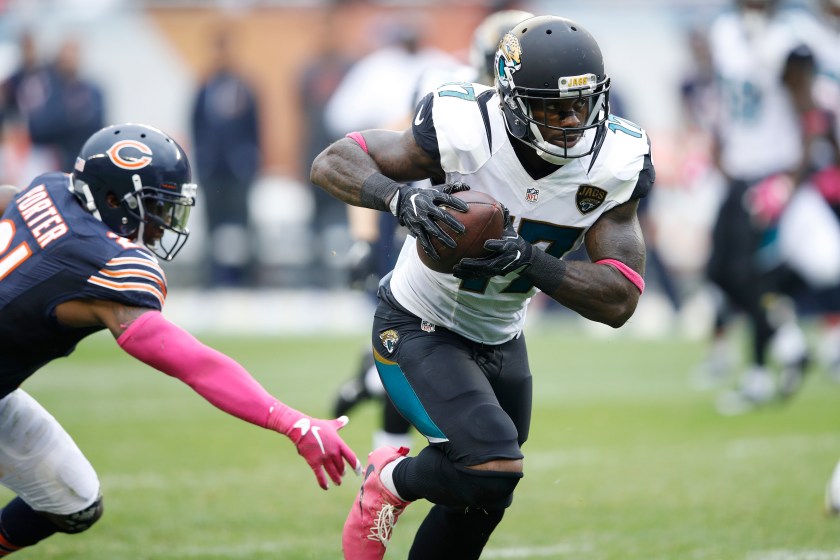 Arrelious Benn #17 of the Jacksonville Jaguars runs for a 51-yard touchdown after a reception against the Chicago Bears in the fourth quarter of the game at Soldier Field on October 16, 2016, in Chicago, Illinois. The Jaguars defeated the Bears 17-16. (Joe Robbins/Getty Images)
Getty Images 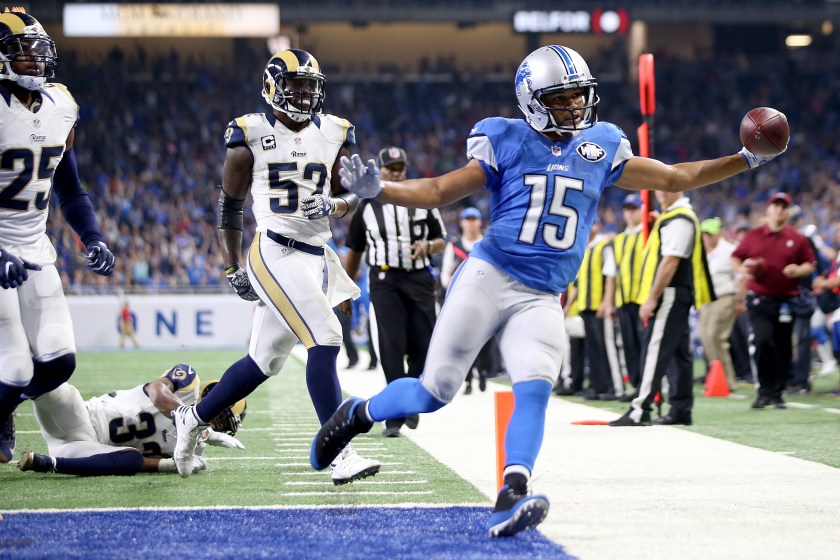 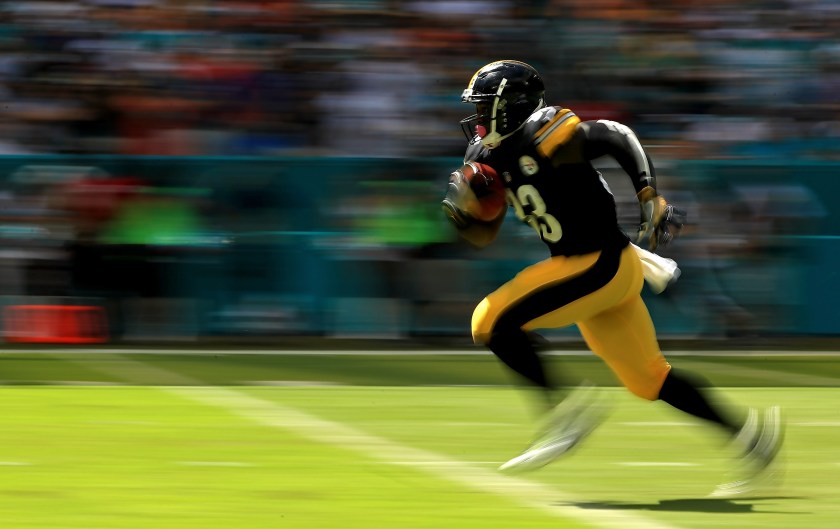 Fitzgerald Toussaint #33 of the Pittsburgh Steelers returns a kick during a game against the Miami Dolphins on October 16, 2016, in Miami Gardens, Florida. (Mike Ehrmann/Getty Images)
Getty Images 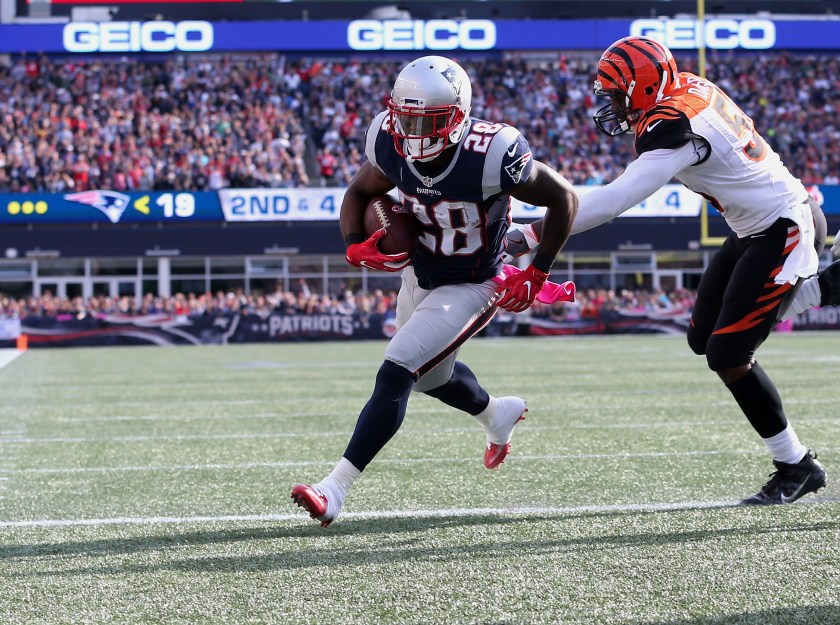 James White #28 of the New England Patriots runs in a touchdown against the Cincinnati Bengals in the third quater of the game at Gillette Stadium on October 16, 2016, in Foxboro, Massachusetts. (Jim Rogash/Getty Images)
Getty Images 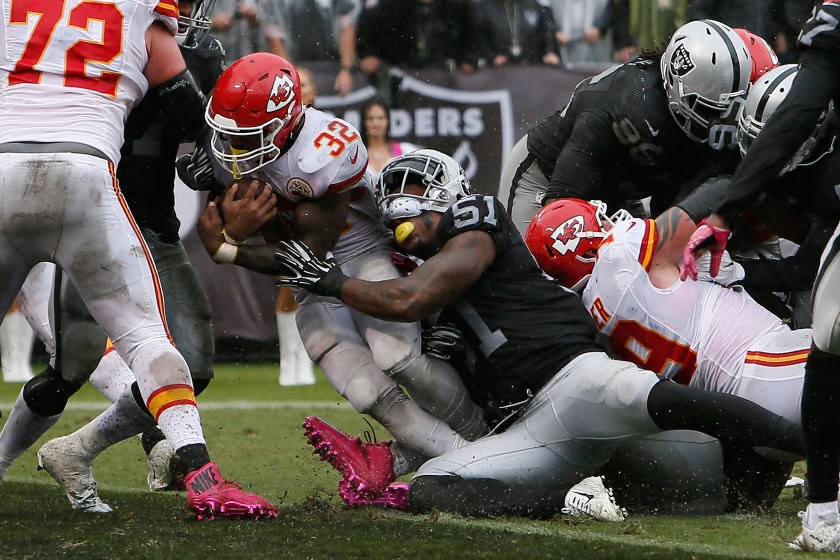 Spencer Ware #32 of the Kansas City Chiefs scores on a two-yard rush against the Oakland Raiders during their NFL game at Oakland-Alameda County Coliseum on October 16, 2016, in Oakland, California. (Brian Bahr/Getty Images)
Getty Images 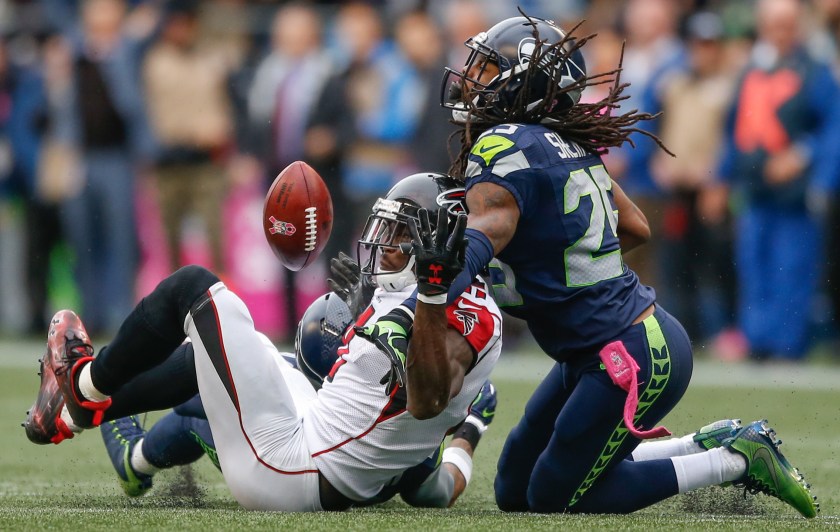 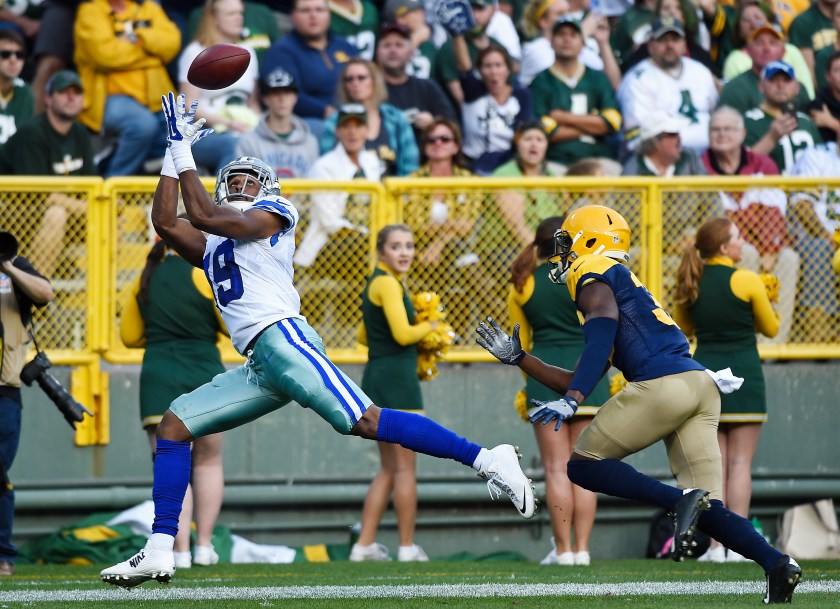 Brice Butler #19 of the Dallas Cowboys catches a touchdown pass under pressure from Micah Hyde #33 of the Green Bay Packers during the second quarter at Lambeau Field on October 16, 2016, in Green Bay, Wisconsin. (Hannah Foslien/Getty Images)
Getty Images 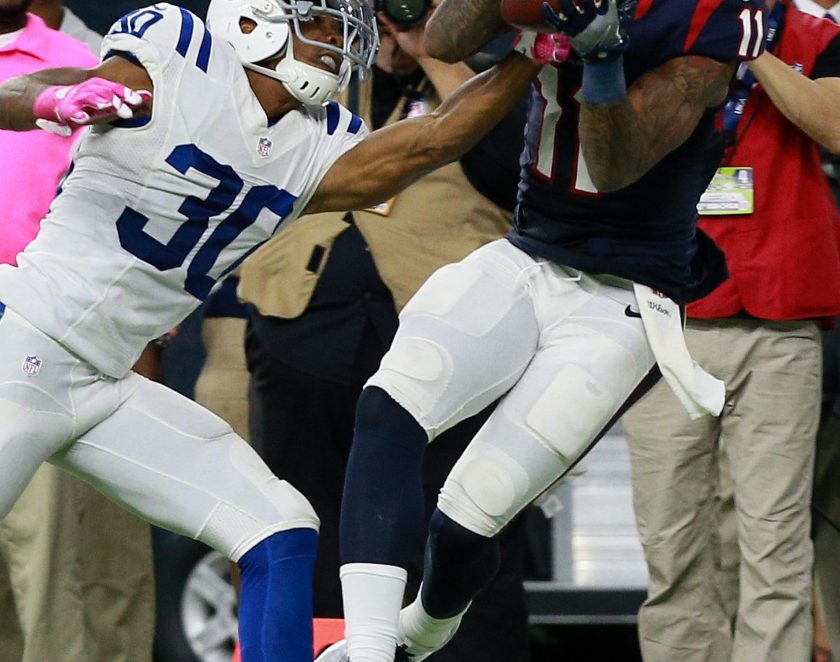 Jaelen Strong #11 of the Houston Texans makes a catch over Rashaan Melvin #30 of the Indianapolis Colts in the fourth quarter at NRG Stadium on October 16, 2016, in Houston, Texas. (Bob Levey/Getty Images) 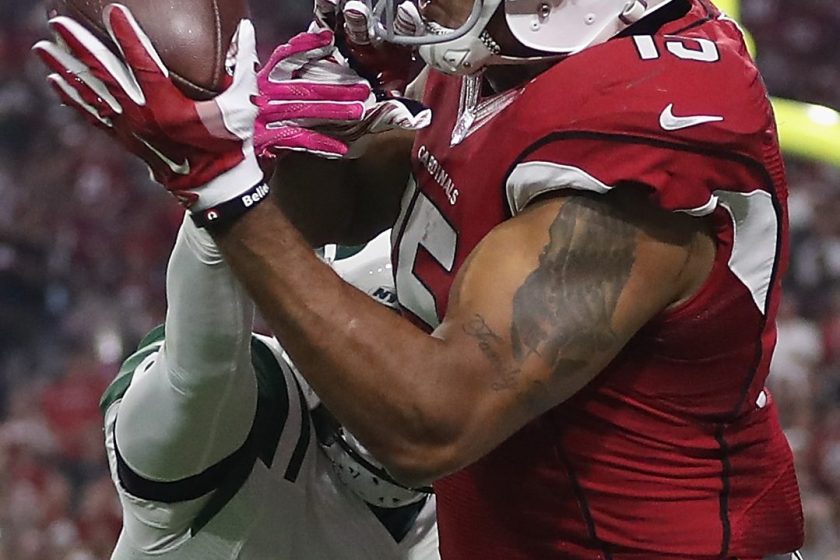 Wide receiver Michael Floyd #15 of the Arizona Cardinals makes a 9-yard touchdown reception against cornerback Darryl Roberts #27 of the New York Jets in the fourth quarter during the NFL game at the University of Phoenix Stadium on October 17, 2016, in Glendale, Arizona. (Christian Petersen/Getty Images)