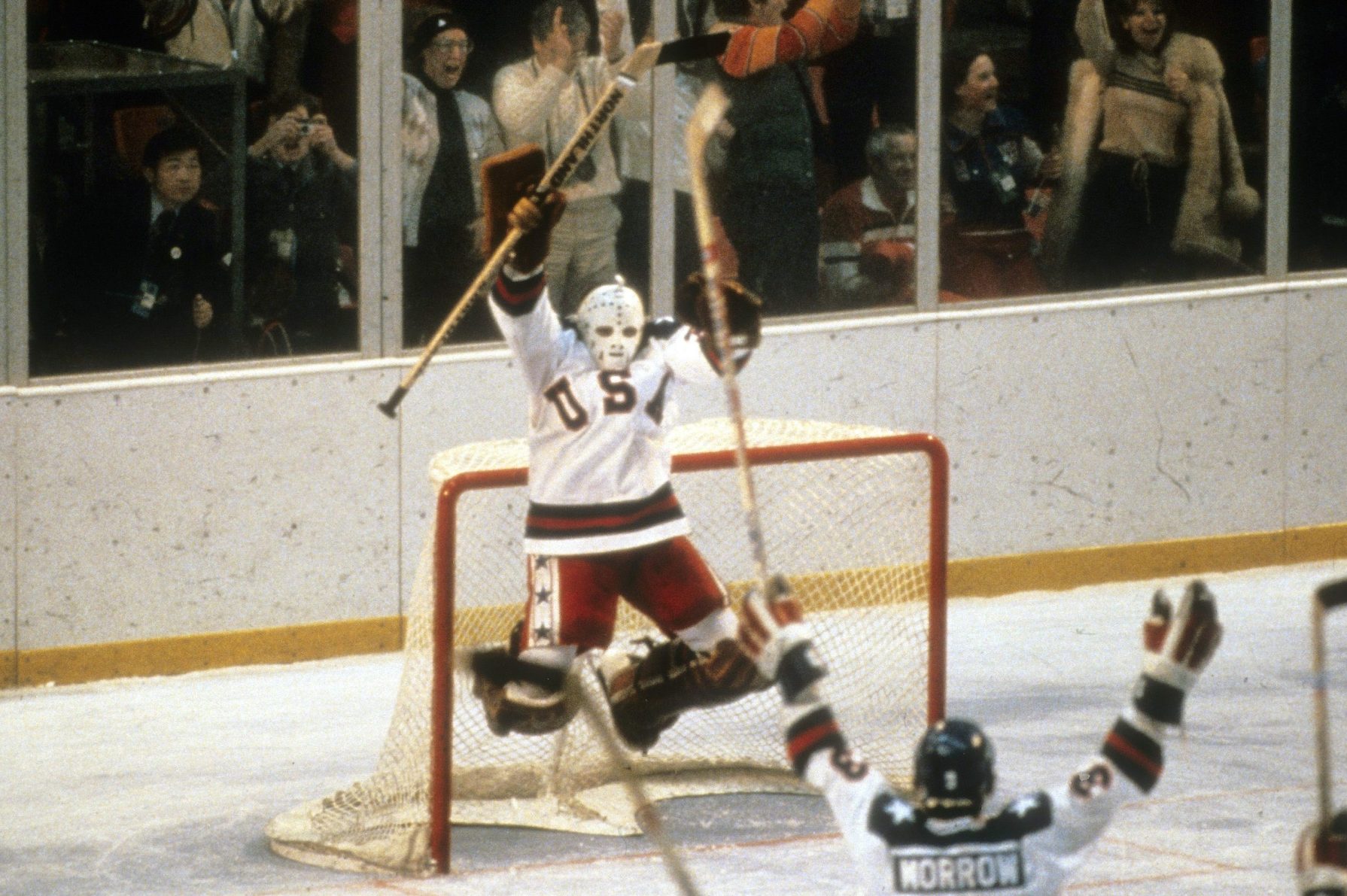 Goaltender Jim Craig jumps with jubilation after the U.S. beat the Soviet Union. (Focus on Sport/Getty)
Getty Images
By Evan Bleier / February 20, 2020 5:45 am

In the midst of the Cold War, one of America’s most memorable victories over the Soviets came in a hockey rink in Upstate New York.

Immortalized by Al Michaels with one of the most iconic calls in sports broadcasting history, the “Miracle on Ice” occurred on February 22, 1980, when the United States men’s hockey team knocked off the four-time defending gold-medalist Soviet Union squad 4-3 in the semifinal round of the Winter Olympics.

Mike Eruzione fired home “the shot heard round the world” halfway through the third period to give his team the lead and the Americans were able to hold on over the final 10 minutes as goalie Jim Craig made save after save.

The victory didn’t ice the tournament for the underdog Americans — a team made up of college players and amateurs, many of them students at the University of Minnesota — but it did allow them to advance to the Gold Medal game, where they defeated Finland 4-2 two days later.

The Russian squad, on the other hand, entered the game with a roster boasted of professional players and an Olympic winning streak that went all the way back to 1968. Nonetheless, the Americans emerged champions, captivating the nation en route to a victory tour that extended from Wheaties boxes to the White House.

John Gilbert, who covered the 1980 U.S. Olympic hockey team’s run to the gold medal for The Minneapolis Tribune and had unprecedented access to head coach Herb Brooks, compares the win to a high-school football team in football knocking off the Patriots.

“There was an immediate recognition among every hockey person and every hockey fan,” Gilbert, the author of Miracle in Lake Placid: The Greatest Hockey Story Ever Told, tells InsideHook. “And the people that were baseball fans in Southern California appreciated it and couldn’t believe it really happened. It was on the cover Sports Illustrated. Everybody knew how big it was and even people who knew nothing about hockey would ask, ‘What the hell, how could they do that?’ It was impossible to even comprehend.”

Adding to the incomprehensibility was the fact that the Americans had been hammered by the Soviets during an exhibition game at Madison Square Garden three days before heading to Lake Placid.

“They got beat 10-3 by the Soviets,” Gilbert says. “They had a great player named Alexander Maltsev. He came down at about 90 miles an hour on the U.S. defensemen and did almost like a Baryshnikov leap and spin and came down on the other side and scored with his backhand all in one-tenth of a second. It was an unbelievable goal. So the U.S. got hammered. Talking to the New York media, Brooks said he knew they were in trouble at the introductions because when they introduced the Russian players, his players applauded. And then he says, ‘And then Maltsev scored that goal and I applauded.’”

The triumph, which came on the heels of President Jimmy Carter’s announcement that the United States would boycott the 1980 Summer Games in Moscow because of the Soviet invasion of Afghanistan, the Miracle win inspired a sense of patriotism and pride that even Gold Medal wins do not always conjure up.

“It took place at a time in which the country was in a little bit of an inner turmoil, if you will,” Jon Lundin, the director of communications for the Olympic Regional Development Authority and a lifelong Lake Placid resident, tells InsideHook. “I’m in my 50s. People of my age, we remember where we were, who we were with and what we were eating when we heard that the Soviets have lost to the United States. That moment brought the country together at a time when it really needed to be brought together. It’s a moment that will — because of today’s media and especially social media — never be repeated.”

Though fans looked at the game as a battle between world powers, the players never saw it that way, according to Gilbert.

“All of the goings-on were built up huge in the media with news stories and news accounts,” he says. “It was like, ‘Boy oh boy, here’s this team with no chance to beat the Soviet team.’ And that was on top of all of these other indignities being heaped upon the U.S. politically, diplomatically and in the whole world. But I have to tell you, the players went into that thing and had such focus from Brooks’s guidance. They were isolated. They didn’t go back to the room and watch CNN or the local news. They didn’t know what was going on. It was not a focal point of these players in their minds. They were just trying to win.”

And that win had lasting implications not just for the American players — many of whom probably haven’t had to buy a drink in four decades — but for hockey in the U.S. in general.

“The afterglow from the ’80 Olympics caused the NHL to suddenly respect and seek the Minnesota guys. And they then went after the Europeans,” Gilbert says. “At that time, there were no Europeans in the NHL. Suddenly the doors opened and the NHL scouts became global. The biggest thing that happened out of ’80 was that suddenly the NHL started studying and appreciating and drafting American players, particularly from Minnesota. And that’s a huge element. New Jersey took an American, Jack Hughes, with the top overall pick this year. That’s pretty astounding.”

But not as astounding as the legacy the Miracle on Ice — which was named the No. 1 sports moment of the 20th century by Sports Illustrated — still enjoys today.

“This could never happen again,” Gilbert says. “If the Tennessee Titans had won the Super Bowl, well there could be just as big an upset next year in the Super Bowl, you know what I mean? Anything in sports could be done better the next year — but not this. The best Europeans are now playing in the NHL, so you can’t get the genie back into the bottle. You can’t put amateurs back on the ice. This was once in a lifetime. It’s not going to ever be duplicated. If the U.S. won in 2002 in Salt Lake City, it would have been really good. But it would have shown that the American NHL could win the tournament from the Canadian NHL. That’s a lot different than saying that a pickup team from Minnesota with a few added guys would knock off the best players in the universe. And that’s what this was.”