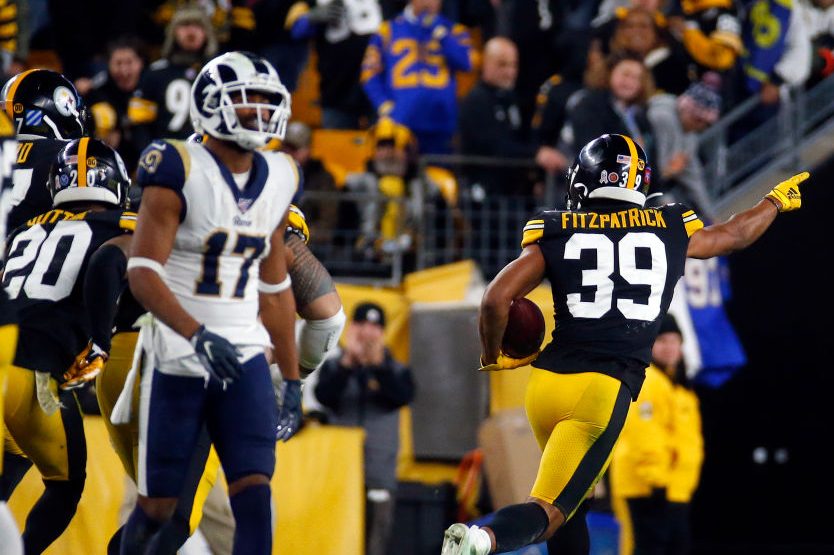 Minkah Fitzpatrick #39 of the Pittsburgh Steelers celebrates after an interception. (Justin K. Aller/Getty)
Getty Images
By Evan Bleier / November 12, 2019 8:37 am

After the Seahawks upset the 49ers in overtime on Monday Night Football, Week 10 of the NFL season is in the books and open for review. While we can’t get to everything — like Matt Stafford’s back injury and the death of former Lion Charles Rogers — here are five of the top storylines to emerge from the football week that was, and whether we’re buying or selling on ’em.

Buy: The Raiders will be a playoff team in the AFC

After a tumultuous preseason with troubled wide receiver Antonio Brown that was well-documented by HBO on Hard Knocks, the Raiders looked like they were headed for a dumpster fire during their final season in Oakland.

But the team came out in Week 1 and got a home win over a Denver Broncos team with (since-squashed) playoff aspirations behind rookie running back Josh Jacobs’s two touchdowns and 105 receiving yards and an additional score from new No. 1 wide receiver Tyrell Williams.

The Raiders had a tough time in Week 2 against the Chiefs and Week 3 against the Vikings, losing by a 62-24 combined margin, but have rebounded since to win four out of six, including last week’s win over the LA Chargers on Thursday Night Football.

Jacobs, the hero of Week 1, scored the game-winner for Oakland:

Now 5-4 on the year, the Raiders are on the edge of the playoff picture in the AFC and, based on their schedule, could find themselves inside of it by the end of the season for the first time since 2016.

Out of their seven remaining games, the Raiders only face one team with a winning record (Chiefs) and have three against teams that have been downright awful this year (Jets, Bengals, Broncos). Their remaining three (Jaguars, Titans, Chargers) are also very winnable.

At worst, Oakland should get through this stretch at 4-3 to finish at 9-7, but it’s certainly not a stretch to think they could end up 10-6 or even 11–5. In a weak AFC, all three of those records would likely be good enough for the Raiders to end their final season in Oakland with a playoff berth.

Sell: The Cleveland Browns are back in the playoff hunt

Thanks to a 19-16 win over the Buffalo Bills on Sunday, the Cleveland Browns avoided letting their season spiral completely out of control.

But the win, which snapped a four-game losing streak and saw quarterback Baker Mayfield avoid throwing an interception for the second straight game, is too little, too late for Cleveland.

Even in a weakened AFC, the 3-6 Browns still find themselves in 13th place in the playoffs standings, ahead of only the two-win Jets and Dolphins and winless Bengals.

With just seven games left to play in the regular season, that hole will be too deep for the Browns to dig out of.

Last year in the AFC, the Colts made the playoffs with a 10-6 record. The Steelers, who finished 9-6-1, didn’t make the cut.

For the Browns to make it to 10-6, they’d have to win out — a virtual impossibility. For the team to even make it to 9-6 would require the Browns to go 6-1 down the stretch and escape with only one loss from a home game against the Ravens, an away game in Arizona and two games against the Pittsburgh Steelers. At this point, that seems very unlikely.

What seems more likely is that Cleveland will, at best, win five out of their last seven games to finish at 8-8, just one game better than their 7-8-1 record last season.

Buy: Adam Vinatieri may have cost the Colts the playoffs

With 2,656 points, 24-year placekicker Adam Vinatieri is the leading scorer in the history of the NFL.

A four-time Super Bowl winner, the 46-year-old has been a reliable option in a league where inconsistent kickers are the rule, not the exception. This year, though, he may end up costing the Indianapolis Colts a playoff spot.

On Sunday, a missed Vinatieri field goal meant the team needed to score a touchdown after reaching the Miami Dolphins’ 16-yard line while trailing 16-10. With the game in the balance, the Colts were stopped at the eight-yard line on fourth down and lost, dropping their record to 5-4.

Vinatieri also missed a kick at the end of regulation in Week 9 that would have given the Colts a one-point win and also missed two field goals and an extra point in Week 1 in a game they lost by six.

Overall, the NFL’s all-time leading scorer has missed 11 kicks this season, including six extra points. In every game Indianapolis has lost, Vinatieri has missed at least one kick, and his 70 percent conversion rate on extra points would be the worst in NFL history for a kicker with at least 20 attempts.

If Indianapolis misses out on a playoff spot by a game or even two, there’s no question that Vinatieri will deserve a good portion of the blame in what could (and probably should) be his final season in the NFL.

Sell: The first-place Dallas Cowboys will win the NFC East

Courtesy of a 28-24 loss to the Minnesota Vikings on Sunday Night Football, the Cowboys now sit at 5-4 on the season, tied with the Philadelphia Eagles for first place in the NFC East.

Losers of four of their last six, the Cowboys have not beaten a team with a winning record at the time they played them in the regular season since Week 13 last year, against the Saints.

That’s an ominous statistic, as four of Dallas’ remaining seven games come against teams with winning records (Patriots, Bills, Rams and Eagles). In order to win their division, Dallas will likely need to win at least three of those games, most importantly the one against the Eagles in Philadelphia in Week 16.

To give themselves a shot at holding off the Eagles, who have a much easier schedule than Dallas down the stretch, the Cowboys will also need to beat the Lions in Detroit and/or knock off the Bears in Chicago.

Based on how they’ve been playing against good competition for the better part of a year, there’s little reason to think the Cowboys will be able to do it.

Sitting at 0-2 after losing Ben Roethlisberger for the season to an elbow injury, the Pittsburgh Steelers looked like they were dead in the water.

At a time when many general managers would have considered moving players to help gain future assets, Pittsburgh GM Kevin Colbert did the complete opposite and sent a first-round draft pick to the Miami Dolphins for safety Minkah Fitzpatrick.

Since then, the Steelers have won five of seven games and are currently riding a four-game win streak that has them back in playoff contention in the AFC at 5-4.

Though the team has dropped two of them, Fitzpatrick’s first seven games for the Steelers have been nothing short of spectacular: he’s amassed one forced fumble, one fumble recovery, two defensive touchdowns and five interceptions.

The last of those picks sealed the Steelers’ 17-12 win against the Los Angeles Rams on Sunday.

With two years remaining on a reasonable $16.4 million contract that the Dolphins have already paid the majority of in the form of a $10 million signing bonus, the second-year safety is looking like a great value and totally worth the steep price Colbert paid to acquire him in September.

If the Steelers, who now have the second-most takeaways in the league with 26 (the New England Patriots have 27), are able to keep winning and make the postseason, the trade for 22-year-old Fitzpatrick will go down as one of the best in-season moves in recent memory.

Colbert deserves credit for making it.