LEXINGTON, KY - DECEMBER 03: Lonzo Ball #2 of the UCLA Bruins reacts after making a three-point basket against the Kentucky Wildcats in the second half of the game at Rupp Arena on December 3, 2016 in Lexington, Kentucky. UCLA defeated Kentucky 97-92. (Photo by Joe Robbins/Getty Images)
By Sean Cunningham 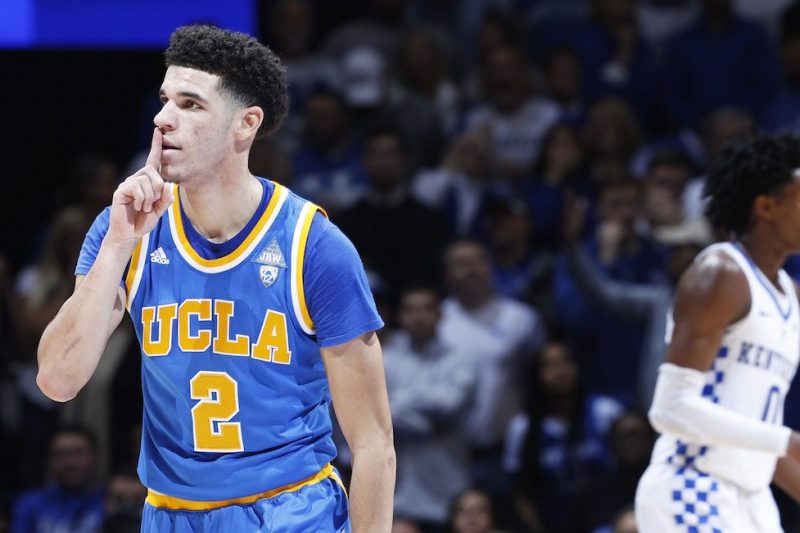 Sports purists who believe youth basketball is out of control and NBA teams shouldn’t draft anyone who isn’t at least a junior in college probably won’t appreciate the Ball brothers.

Quite simply, the three Ball siblings (19-year-old Lonzo, 18-year-old, LiAngelo, and 15-year-old LaMelo) are basketball’s answer to the Williams sisters in tennis: Sibling prodigies raised by a father who isn’t hesitant to tell the world how great they are. Indeed, LaVar Ball makes Richard Williams seem downright modest.

The elder Ball has proclaimed that eldest boy Lonzo is already “better than” reigning two-time MVP Steph Curry. (He cites his son being taller at 6’7″ as well as “faster” plus he “jumps higher.”)

“If Steph had to guard Lonzo one-on-one, he couldn’t hold Lonzo. I can’t wait for the first game they play together in the NBA. Then, when my son beats him, then what?’,” he bragged.

He also insists each of his sons is, for his age, more advanced than the previous boy.

To him, that adds up to a shoe deal worth $1 billion for the trio of siblings. That number actually isn’t as far-fetched as it sounds: LeBron James has a billion-dollar lifetime deal.

Then again, LeBron James is LeBron James. And the Ball brothers currently have less than one year of college experience between them. It’s been a good one though. The UCLA Bruins earning a #3 seed in the NCAA tournament and freshman Lonzo establishing himself as a top playmaker with 14.6 points and 7.7 assists per game entering the tourney while shooting well over 50 percent from the floor. He plans to declare for the draft, where he projects as a lottery pick, likely in the top five.

His brothers have already committed to UCLA, meaning soon more Balls will take his place. (There should only be one Ball at a time though, as LaVon insists all three sons will turn pro after their freshman year.)

And yes, there is something odd about a 15-year-old being committed to a college. Indeed, sophomore LaMelo embodied everything captivating and also cringeworthy about the Ball clan in a game where he scored 92 points…. but notched a huge percentage of them on lay-ups where he didn’t play defense and just hung out at the basket. Then again, he dedicated the game to a hospitalized classmate.

LaMelo said “my dad told me to keep scoring, so I did”—which would be fine, except that his dad is not his head coach.

Father LaVar Bell, in case you couldn’t tell, is not a man shy about about sharing opinions or lacking in confidence. He insists, “Back in my heyday, I would kill Michael Jordan one-on-one.” While roughly the same height as Jordan at 6’6″, there is otherwise just a bit of a disparity between their resumes. Even as a freshman at North Carolina, Jordan averaged 13.5 points and 4.4 rebounds and hit a national championship-winning shot. LaVar’s career highlight was probably averaging 2.2 points and 2.3 rebounds a game during the 1987-88 season at Washington State.

Of course, Richard Williams never won a major, either. Indeed, he didn’t even have any particular interest in tennis until, as a middle-aged man, he watched a match on TV and saw how much money was in the sport. That didn’t stop him from proclaiming the greatness of his daughters. They’ve more than backed up his words, though, as Venus has won seven Grand Slam titles and Serena 23. (Plus another 14 together in doubles.)

Then again, former NFL player Marv Marinovich once decided to raise the perfect quarterback. His son Todd, the “Robo QB,” seemed to be fulfilling these dreams with a USC career followed by becoming a first round NFL draft pick. Instead, Tood’s career fell apart as he struggled with drugs and generally rejected the life his father so strictly) laid out for him.

Will the three Balls meet their father’s hype? The Balls have recently experienced the downsides of fame: their home was burglarized during a playoff game featuring the two youngest boys—it had already been a grim day, as LaMelo missed 20 threes in the loss.

Below, see all the Balls—including 6′ mother Tina, who played ball herself—on Christmas Day: in general, the three boys seem surprisingly laid-back, particularly compared to their manic father. Skip to 2:30 to see them take the court and LaVar respond to a son’s heckle of “air ball” by throwing up just that.