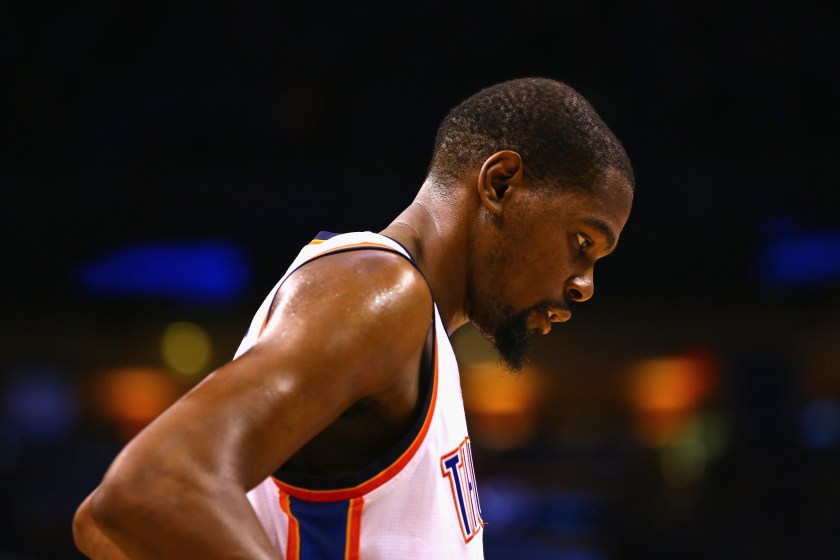 Kevin Durant #35 of the Oklahoma City Thunder reacts during the fourth quarter against the Golden State Warriors in game six of the Western Conference Finals. (Maddie Meyer/Getty Images)
Getty Images

When Kevin Durant announced his decision to leave the Oklahoma City Thunder after nine years, he knew what he was in for. He’d seen the now-ironic image of Clevelanders burning LeBron James jerseys (at the time, Durant had re-signed with OKC on the same day). But after the first weekend of NBA free agency (filled with rampant speculation around target teams like the Heat, Spurs, and Celtics), Durant chose to join the reigning champs in Oakland, California.

It was a decision Durant didn’t take lightly—one marked by years of repeatedly falling short of the league title. The phenom had been on the NBA grind for as long as he could remember, a “basketball robot,” as he calls it. So, along with taking a vacation, Durant decided he needed to focus on what made him happy instead of only what would be best for his craft.

That said, when free agency came around, Durant’s mind wasn’t exactly made up. He hosted a rotating coterie of suitors at a house in East Hampton, New York. When it came time for Golden State to make their pitch, they brought out the big guns: Steph Curry, Klay Thompson, Draymond Green, and their coach Steve Kerr. There was even a virtual reality component to the presentation, which glitched out after a few seconds. 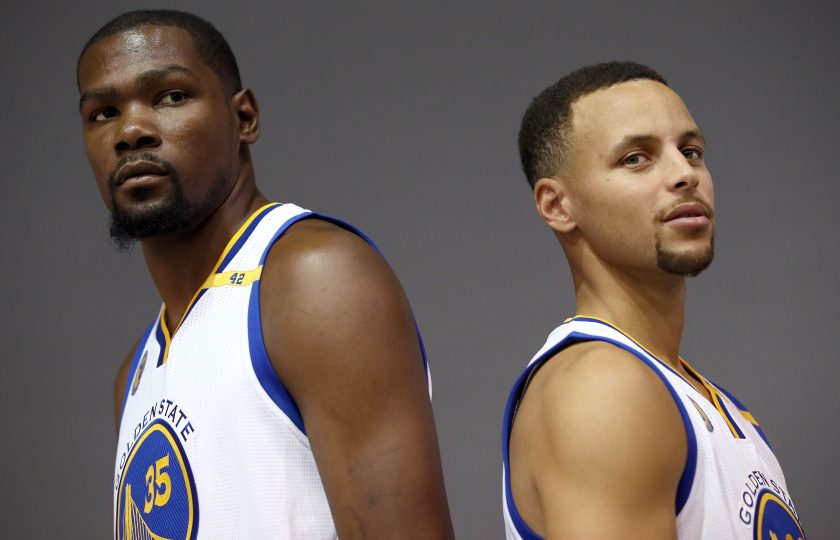 Durant reflected on what he saw in the character and the personality of his possible teammates, deciding that that was the group he wanted to play with. According to journalist Paul Solotaroff, it was a decision that marked a new era for the 2014 NBA MVP, one that was defined by a different Durant entirely. Here’s Solotaroff:

“Ladies and gentlemen, I give you Kevin Durant 2.0: the world’s-my-oyster, body-adorning, liberated upgrade. It is this model he’s taking, with his inimitable talents, to the Golden State Warriors this fall, leaving behind the team he built from splinters into a perennial title contender, the Oklahoma City Thunder. In so doing, he’s knowingly placed in jeopardy his richly earned brand as the game’s kindest star, opening himself up to a barrage of criticism usually lobbed by alt-right trolls. And why all this hatred for a guy who did things right, carried a franchise on his back for nine years while it tried to win a championship on the cheap? Because, for the first time in his life, Durant prioritized himself, chose to pursue his own joy, not his sense of obligation to millions of strangers.”

Read the full story from Rolling Stone here. Before you do, watch Durant speak about the move himself in the interview with Bill Simmons below.

10 Chicago Chefs on What "The Bear" Gets Right (And Really Wrong)
Make Buttermilk Biscuits at Home With the Popeyes Founder's Secret Recipe
LIV Defectors Are Raking in Winnings, Except for Phil Mickelson
Where Does the No-Tip Trend Go From Here? A Restaurant Vet Weighs In.
Snoop Dogg on the Kitchen Hack He Taught Martha Stewart
Malcolm Gladwell Has a Point: WFH Isn't Always Healthy